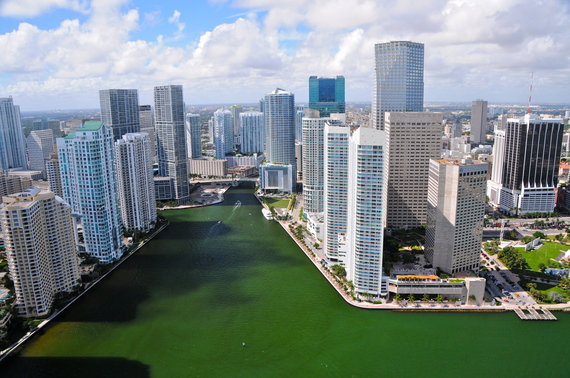 Quick cuts to super-pollutant soot and methane needed to stave off calamity.

The Paris climate agreement that nearly 200 nations signed on Friday is important, but it's not enough. Speed matters in climate protection. Immediate action to cut four "super pollutants"  could make the difference between a reasonably safe climate and one that carries staggering human and financial costs.

Scientists have recently issued new climate warnings, as warming accelerates at a pace unprecedented in the last 66 million years. Arctic sea-ice, which reflects considerable warming back to space, has reached a new winter low. And the once-stable West Antarctic Ice Sheet may be starting to disintegrate, threatening five to six feet of sea-level rise during this century, inundating many coastal cities and populations.

Risks to human health are also accelerating. In the U.S., tens of thousands of people will die prematurely every year from extreme heat waves, floods and violent storms, as well as from diseases carried by mosquitos and ticks, according to a recent White House report. The financial cost will be astronomical if we fail to keep warming below 3.6ºF above pre-industrial levels -- the upper limit recommended by experts for at least some assurance of safety. Adapting to rising temperatures will slow global economic growth and cost trillions over the next century leaving millions more people mired in poverty and making it all the more difficult to pay for the costs of dealing with climate change.

The nightmare scenario is one in which "feedback mechanisms" cause uncontrollable impacts in an endless loop. For example, as warming has accelerated, shrinking Arctic sea ice has added an extra 25% more warming since 1979 beyond warming from carbon dioxide emissions. Similarly, as the Arctic heats up at twice the global average rate, permafrost thaws and releases methane that causes still more warming. Over the last year, rising temperatures have also contributed to Alaska's near-record forest fires, which melt the insulating layer above the permafrost, adding still more methane to the atmosphere, on top of the carbon from the fires themselves.

Unless we rapidly slow down these self-amplifying feedback mechanisms, we could lose the first major battle of climate change and face worse problems in the future.

All countries must keep their commitments to pursue aggressive cuts to carbon dioxide under the Paris Agreement. Yet even under full implementation, global temperatures will increase between about 4.5 and 7.2 degrees Fahrenheit, far above the 3.6-degree guard rail. The best and fastest way to prevent immediate climate destabilization lies in cutting back on emissions of super pollutants that make outsize contributions to warming despite the fact that they are produced in much smaller quantities than carbon dioxide. They include ground-level ozone and black carbon soot, from sources such as power plants and diesel engines, as well as methane (often from natural gas systems and agriculture) and hydrofluorocarbon refrigerants (HFCs) in air conditioning and other systems.

These four super pollutants are between 28 and 4,000 times more potent warmers than carbon dioxide. And because they are short-lived, slowing their release into the atmosphere can curb warming quickly.  Ground-level ozone and black carbon disappear within a month, methane and HFCs within 15 years. By contrast, 25% of carbon dioxide remains in the atmosphere for 500 years or more. Slashing the super pollutants could reduce the rate of warming by as much as 50% in the critical period from today to 2050.

This may be the best - perhaps the only - way to slow warming in the near term, and to stop the self-amplifying feedbacks from surging beyond control. There are other enormous benefits. Pollution from black carbon soot cuts short millions of lives every year: replacing dirty diesel vehicles as well as the inefficient cook stoves and lanterns (often used indoors in developing countries with deadly effects) could save nearly 80 million lives over the next 20 years. Ground-level ozone damages crops: cutting it can improve food security for hundreds of millions. Worldwide use of HFCs can be cut under the Montreal Protocol starting this year.

Cutting carbon dioxide emissions remains imperative, and cannot be delayed. Yet the parallel strategy of reducing super pollutants is perhaps even more important to avert disastrous consequences in the near-term.

Mario Molina shared the Nobel Prize in Chemistry in 1995 for work on chlorofluorocarbons and teaches at the University of California, San Diego.

V. Ramanathan discovered the greenhouse effect of halocarbons, and is professor of atmospheric and climate science at UC San Diego.

Durwood Zaelke is president of the Institute for Governance & Sustainable Development.

This column was originally published in USA Today on 22 April 2016.