Last week Paris was abuzz with Fashion Week and the opening of 2 extraordinary exhibits: the first ever retrospective of Yves Saint Laurent's entire work over four decades at the Petit Palais, and a showing of Lucian Freud's paintings and engravings for the past five decades at the Centre Pompidou. Both are iconic figures whose individualistic artistic vision and their near obsessional treatment of their work have placed them in a category of their own in their respective fields.

Some will know the portraits Lucian Freud has been painting since the 1950's. They are often nudes, their flesh and ruddy complexions rendered in thick paint. However, "The Workshop" exhibition brings into view the artist's essential relationship with space and the way his intense scrutiny forces life into the picture. When asked about his work, Lucien had responded, "The effect they (subjects) make in space is as bound up with them as might be their color or smell. The painter must be as concerned with the air surrounding his subject as with the subject himself". Therefore his paintings are a metaphor of the tension between the interior and the exterior space and the confrontation between himself and the model.

The nude portraits of performer Leigh Bowery and of big Sue are among the most ambitious of the painter's works. There are a few paintings of Big Sue that are presented at the show. And it is remarkable to note how Freud's inner relationship with his model changes over the course of time. He grows a certain kind of compassion and respect for her through the countless hours he spent gazing at her. So, her flesh, the poses, and the feelings elicited in later paintings are more subtle and soft. 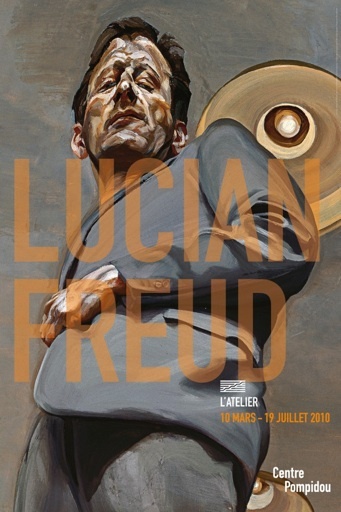 Freud's series of self-portraits are equally powerful--a symbolic journey toward continual self-reflection and awareness. Reflections with Two Children (1965) is one of the most striking because of his unique visual presence in the composition. Painted from a mirror set flat on the floor, Freud is seen from below, rising up as if he is looking down at the viewer. And the pairing of his self portrait from 1985 and 2002 is the most touching, for it is a true meditation on time's wears on his body-- the tired features and the sagging skin, and the fragility of his presence at old age.

There are also photographs taken of the painter in his studio by David Dowson, Freud's assistant. It is a treat to be invited into the painter's creative and personal space, to see the smatterings of paint on the wall, the landscape outside his studio window, and the array of brushes and rags scattered about. There is a brief film clip of him in the studio with a model as well. And it was in this space where I wished I could have lingered longer, seen more. The footage of him in his studio is intimate and personal. Suddenly the tables were turned and I was gazing at the artist, studying the way he occupied his space. This film alone brought the exhibition to a full circle, for the artist was now the one being viewed. 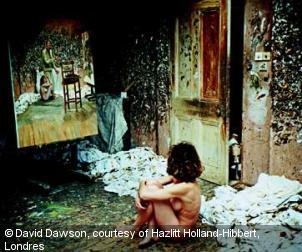 "One day my name will be written in letters of fire on the Champs-Elysees." That's what Yves Saint Laurent boldly declared when he was a young boy living in Algeria, dreaming of becoming a fashion designer. And so he did. The YSL exhibition at the Petit Palais is a tribute to one of the greatest fashion designers of the 20th century.

His modern take on classic design spurred couture's rise from the 60's slump and made ready-to-wear lines reputable. In this exhibition we have an unprecedented look at 307 haute-couture and ready-to-wear garments that illustrate the creative journey that revolutionized fashion for over forty years. It was the trapeze dress that put Saint Laurent on the map when he was designing for the House of Dior in 1958. And fittingly, the exhibition begins with the Trapeze collections.

In the 60's Saint Laurent transformed women's fashion by introducing aspects of the masculine wardrobe. Yet his clothes remained elegant, natural, and feminine. His creations were all the more successful since it coincided with the feminist movement and women's integration into the work force. As it is commonly said, "Madame Chanel gave women their freedom. Yves Saint Laurent gave them power." In 1966, it was the first smoking jacket, 1967 the bush jacket and trouser suit, and in 1968 the first jumpsuit for women.

He drew inspiration from various classical masters be it Matisse, Velasquez, Goya, Ingres or Delacroix. A grouping of his 1967 African inspired creations where he explored the roots of cubism was particularly striking as were the suits inspired by Piet Mondrian's geometric pictures and Van Gogh's Irises. 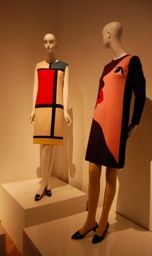 Saint Laurent's desk and his sketches are on display in another room. Of particular interest is that this show also included a video of Saint Laurent in his office sketching his designs. He sketches fluidly and with ease; each sketch is done in virtual minutes. One can't help but be mesmerized by the sheer genius and the unbridled creativity of this designer. On a number of occasions I heard viewers turn to each other and whisper in disbelief, "But he makes it seems so easy. How does he do that?"

The most spectacular room of course is the last room where one journeys into the splendor of his colorful evening gowns all placed on various elevations. In this same room, rows and rows of mannequins dressed in Saint Laurent's signature black dresses and suits covered the entirety of a black wall, which made for a dramatic effect!

Two strong exhibitions of two iconic artists, what else would one want to do while in Paris? That...and of course a chocolate soufflé and an espresso at Le Souffle. 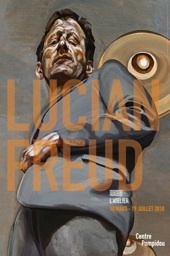 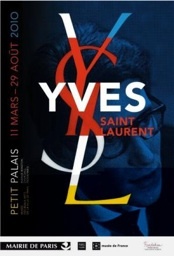