In the court proceedings, an interesting passage from the book surfaced alleging that Paris Hilton smuggled drugs in a Camel cigarette box hidden in a private place, according to The Hollywood Reporter. Simkin writes that Francis once ordered him to deliver a box of cocaine and ecstasy to Hilton before a trip to Europe:

"I asked if she was flying private, and she said, 'No, commercial.' And then as politely as I could, I asked her how she planned on traveling with that amount of blow and X. She held the box in her right hand, and then with an underhand swoop like a lower case J, she demonstrated exactly how she intended to beat airport security. She even whistled as she did it. A little alley-oop with the Camel Box, straight up her snatch. Classic."

Gawker has an extended excerpt. (The upshot: "I spoke to Joe a couple weeks later. He thanked me again for the favor and said it all arrived safe.")

Hilton is scheduled for arraignment on October 27 on a felony cocaine possession charge. She was arrested late last month when cocaine fell out of her purse on the Vegas strip; she claimed it was not hers.

On Tuesday night she tweeted a photo of herself braless at a horse ranch. 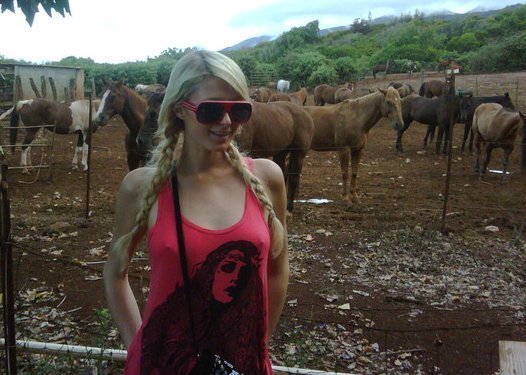