You may have noticed in your AP feed earlier today a strange story about Paris Hilton saving drunk elephants in India. Paris, the story led us to believe, was so taken by the plight of Indian elephants getting drunk off farmers' rice beer and dangerously romping through the villages that she launched what the article called a "Global Elephant Campaign."

That's all very nice of Paris, and interesting if not bizarre news. Except that, for whatever reason, that story has disappeared. And we now see a headline that reads, "AP Kills Paris Hilton Story" the following text:

-- GAUHATI, India _ Kill BC-People-Paris Hilton. Lori Berk, a publicist for Hilton, says she never made any comments about helping drunken elephants in India.

You can even compare the versions of the story posted earlier today and just within the last hour to see that the story was deleted. 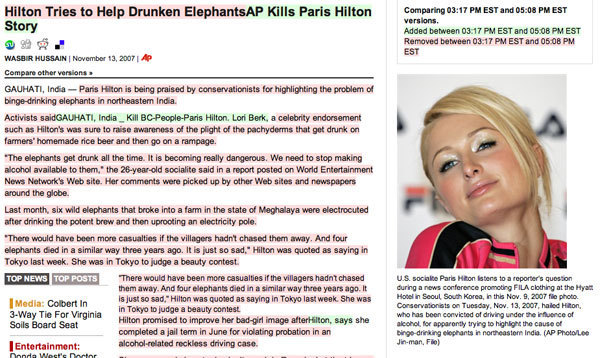 So what happened? Did the Hiltons exercise a Clintonian-control of the media and make the story disappear? Did the residents of Gauhati, India discredit Paris' good, but odd, deed? Or, was it just bad karma (get it?) for the AP, who, you know, broke their own ban on Paris Hilton coverage to bring us news of the Global Elephant Campaign? Feel free to speculate in the comments.