Have you ever fantasized about cutting off all ties with everyone you know, quitting your job, selling your home, throwing out your clothes, to then take all your money out of the bank and leave with a feather-light knapsack (and no cell-phone) to live in a foreign country (preferably Italy), on a cliff overlooking the sea?

Benoit Jacquot puts this fantasy on screen, with the fascinating Isabelle Huppert playing a middle-aged pianist who stoically divorces her husband, sells her apartment in Paris and walks off to Italy through the mountains with a skip and a jump -- with the pivotal movement being when she cuts her long hair into a youthful bob. 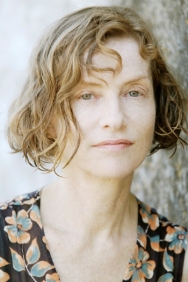 What makes Jacquot's film a captivating and surprising experience is the transformation of his star. In the first half of the movie, Huppert is cold, reserved (as is her wont) and -- it seems -- dead to everything and all. The ambiance of Paris mimics her mood: dark interiors, frigid encounters with real estate agents and bankers, and silent shots of Huppert surrounded by walls. Paris comes off as a prison.

The second half of the movie brings Huppert back to life -- after, of course, a symbolic plunge in the turquoise waters of Ischia, a small island off the coast of Italy.

And as in other films by Jacquot, such as La Fille Seule and The Untouchable, the female concludes her journey as a realized woman -- smiling gaily as she strolls arm and in arm with a childhood friend on an autumnal lane. 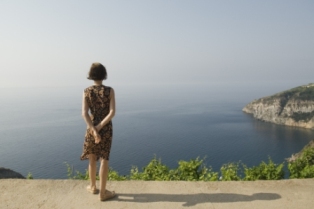 I met Benoit Jacquot at La Terrace, a bright open cafe in the center of the Marais, with sun streaming on the tables. Jocular and witty, Jacquot explained that the impulse for this film was not primarily the eponymous book (by Pascal Quignard) but his decision to make a fifth film with Huppert. The book had arrived in the post, sent by the author, and within a few pages, the director knew this was the film.

He also had an abiding interest in human beings who "become who they are" -- which is the subject of his film.

In this, the book is quite different from the film. While the woman -- Ann Hidden -- finds herself in the film, in the book, it is a matter of losing. When she arrives at the island, she loses herself in the beauty of this paradise -- as well as in the lyrical rapport with four or five tourists who form, together, men and women, an entourage of bisexual love and sensuality. Central to this paradise is a little girl, Magalena, with whom the childless pianist forms a fusional bond.

But paradise for the author is temporary -- as all earthly paradises are: a catalyst to break boundaries, and -- more literally -- to bring the pianist deeper into the "abyss of music." In Ischia, Ann Hidden (of the book, not the novel) becomes a true artist, losing herself to music, experimenting with fugues and notes, with the subtext being that art is the only way for a human to shed their skins.

The other subtext of the novel is sadness. The loss of identity -- initiated with the Paris abandon -- will only lead to more loss. Midway in the journey, the little girl dies. The pianist ages, with sadness, her brilliant music now underscored by pathos.

The novel ends with just the nostalgic memory of a paradise lost.

In contrast, the film feeds our fantasy of fulfillment -- offering the apple of permanent transformation and inner bliss. The director substitutes the ineffable poignancy of the book with the riveting emotional journey of his character towards herself. He enforces the side-story of a father who abandoned the protagonist, and has him come back inexplicably on the island, giving Ann Hidden a chance to "resolve", as the director explained to me, this psychic trauma (a bit too easily in my opinion). Jacquot also turns the anodyne Paris of the book into the Paris we who live here all know: "a place marked by arrogance and brutality", in the director's words. Ann's journey from Paris to Italy is, in effect, a movement from glumness to warmth.

Tellingly, while the protagonist of the book follows her music, Jacquot explained that for him, the exhilarating music composed expressly for the film by Bruno was "the character's shadow", following the character. The music accompanies her, like the shadow of that woman -- he pointed -- crossing the street right then in front of us at the cafe.

I remarked to Jacquot that what made his film outstanding was his attention to emotion: his camera fetish on Isabelle Huppert's face. He had accomplished the same hypnotic effect in La Fille Seule, where a camera is fixed on a young girl's face as she experiences -- in real time -- a job as a porter in a hotel, moving with alienation up and down elevators and through the corridors of a cold-walled building, just like Isabelle Huppert would twenty years later in Villa Amalia, part one.

"This is what film is all about for me," Jacquot said. "Film like no other medium can capture the emotions of the human being." He loved, he noted, the fausse teinte when clouds temporarily obscure the sky to create a different lighting -- an effect technicians detest as it ruins their control of the shot -- but which Jacquot appreciates for the environment's conspiracy in symbolically rendering the shifts of emotions in his characters.

Indeed, Jacquot has an unusual directorial approach: when he shoots, nothing is more important than feeling the "mood" of the actors when they first arrive, and abetting this mood to make it come alive on screen. He changes the composition of the shot -- the blocking, the movement -- to work with what the actor herself has inside "when she shows up in the morning."

"The actor is most important," he added.

But what about the theme of loss? Or in its more theoretical stance, the ever-abiding sense of "lack" in life -- the idea proposed by the novel that one is never satisfied despite a temporary sojourn in Ischia? After all, Jacquot is known for his early friendship with Jacques Lacan -- and he had even made a film on the noted psychoanalyst.

"Nothing sad about lack!" Jacquot grinned and lifted his cafe au lait. "If we weren't always lacking, we would not always be desiring. Desiring, for example, to drink a cup of coffee."

Ironically, however, Villa Amalia -- the idyllic house where Isabelle Huppert "found herself", (constructed specifically for the movie) -- has since been torn down. 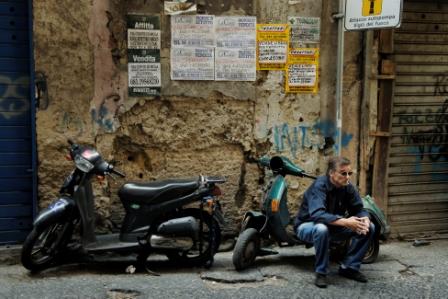