"Leap, and the net will appear," says Janice MacLeod in her memoir, Paris Letters.When MacLeod realized that "I grew up; my dreams did not," she decided to act. She began by with a New Years resolution in 2010 to become an artist. Simply choosing a path is powerful. On December 31, 2006, I made a resolution to find a long-term partner and buy a home. On January 18, 2007, I met George, who would become my travel partner and husband and within days, found a home which I made an offer on and still own.

Reading her memoir, Paris Letters, I was surprised at the similarities in her memoir and my own. While she was "thirty-four, single, lonely, feeling unfulfilled by my job, and on the brink of burnout," I was slightly older (thirty-nine) and much heavier. We did have the same magic number. MacLeod decides: "For now, I had to save or make $100 a day." When George and I decided to create a budget for our sabbatical year, we also used $100 a day as our goal.

Before I met George, I went though many of the choices that MacLeod made. I had read "Calling in the One: 7 Weeks to Attract the Love of Your Life," and one of the suggestions was to clean out a drawer and make space in your life for love. I ended up cleaning out half of my house and taking 17 giant bags to National Council for Jewish Women Thrift Shop in West Los Angeles.

MacLeod began with cleaning out closets and realizing shopping more only brought clutter into the house. She ponders: "Was I getting rid of the things that got in the way of a remarkable life? Could I actually have a remarkable life underneath all this stuff?" Making conscious choices to take care of herself, paint more, finish letters and sell things she did not need allowed her to reach and surpass her goal "by doing a hundred little things to save or earn $100 a day. I managed to save almost $60,000, nearly twice what I thought I'd save." 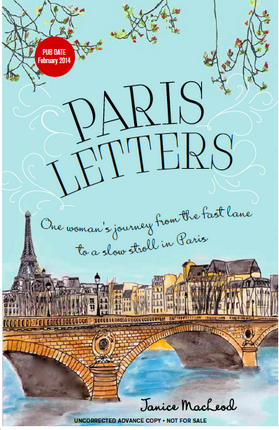 During a trip to Rome with her friend, they continued their tradition to write wishes on hardboiled eggs: "We wrote our wishes on the eggs with a black magic marker and hurled the eggs into the sea. My wish was for a sweet life. La dolce vita." After this Italian journey and with her savings, MacLeod leaps into a new life and begins to travel. Though inspiration from Percy Kelly, she creates Paris Letter Service, a new business of water-colored letters of her voyages. She began to let "go of who I was and grab hold of who I was to become."

Through a new friend, MacLeod realizes romance could happen to her. "Isn't that what you're here for? That's why I'm here. I'd love a little French romance on my Parisian adventure." After her first letter to her Parisian Polish crush, she wonders about a new love not ending. "I hadn't considered that option before. That it could not end. I thought of my letter. I didn't know at the time that the letter full of questions for the butcher would lead to a lot of answers." She is willing to consider a greater life.

You may not have realized it at the time. You thought you were just looking to quit your job, but really, you were looking for happiness. You could find it with Christophe. What could happen? Happiness? Great. Ruin? You can handle that. Do you think you'll lose everything and become homeless? You already got rid of everything. You're already homeless.

Like MacLeod, I had no idea that being willing to jump into the abyss would bring me a man wearing a black tuxedo that made me think of James Bond on our wedding day. I loved how their love story developed and how speaking different languages helped to bring them together and solve conflicts.

Luckily for MacLeod, as "Christophe pointed out, 'our whole life is a honeymoon.'" Not everyone has a man who says, "I am picking up a princess. I need to look like a prince, not a chauffeur." But I can say that MacLeod made a resolution that allowed her dreams to come true and so did I.

MacLeod shares how she became kinder to herself:

I let myself stay home and paint rather than go out 'just in case my soul mate was there.' I started enjoying the process of unraveling my apartment and of not having as many choices in my closet. I walked more. I bought myself flowers. I started this journey by getting rid of clothes, but eventually I slowly peeled off the layers of judgments I had placed upon myself for failing to get married by the ripe old age of thirty-four. For failing to find happiness in my chosen career. For creating a life that wasn't much fun. I let myself off the hook. I forgave myself for the judgments. The truth is that I did the best I could with what I knew at the time. And at some point, I had the good sense to change my usual self-inflicting, unnecessary, and lame New Year's resolution from an uncreative 'lose ten pounds' to a simple practice of writing in my journal. It was this slight change that got the ball rolling.

I hope that you have made resolutions you can keep. Maybe try a new one this year as a Valentine's gift to yourself. To write in your journal. To take a daily walk. Or to become "The artist who is the head honcho creative director of her own life. We must know how to design our lives. We are all artists, and each day is a canvas." Paint something beautiful!

About this Review: Lisa NIver Rajna is traveling the world with her soul mate and husband, George. They left Los Angeles in July 2012. Follow their journey at We Said Go Travel. Read about their underwater engagement in Thailand in Traveling in Sin.