What is French ballet? Most of the world's various ballet techniques are beginning to melt together. But the Paris Opéra Ballet's visit to New York this month, its first in 16 years, proved that the French style remains distinct and definable. As embodied by the company's dancers, it's the epitome of elegance.

That's a strange thing to say about any style of ballet, since all ballet is inherently elegant. But the French value elegance above all. POB boasts what might be the world's most breathtakingly uniform corps de ballet, rows upon rows of dancers who have been exquisitely molded by the Paris Opéra Ballet School. (Nearly all of them are French.) Their technique is handsome, precise, and intensely self-conscious. It has no amplitude. Most of POB's dancers can't project beyond their own fingertips, because they're too worried about whether their fingers are properly placed. They're preoccupied with detail, so they're less likely to take risks.

To indulge in a few stereotypes: Russian ballet is lush and expansive. Balanchine ballet is fleet and musical. French ballet is perfect, and perfection is limiting.

The place POB does take risks is in its programming. It regularly dances works by contemporary choreographers like Mats Ek, Wayne McGregor and Pina Bausch. (Even the range represented by that short list is impressive, when you consider what the average American ballet company is dancing.) In New York, POB emphasized the depth of its repertoire, showing, over the course of two weeks, three very different programs: an "all-French" evening with works by Serge Lifar, Roland Petit and Maurice Béjart; the classic romantic ballet Giselle, which the company has danced for more than 100 years; and Bausch's full-length dance-drama Orpheus and Eurydice.

(A sidenote: It was a little disorienting to see Lifar's Suite en Blanc and Petit's L'Arlésienne in the David H. Koch Theater, since both ballets use music that the New York City Ballet has recently danced to on that same stage. Suite is set to Édouard Lalo's score for Namouna, which Alexei Ratmansky used in his deliciously ambiguous Namouna: A Grand Divertissement at NYCB in 2010; L'Arlésienne uses Bizet's familiar score, which Christopher Wheeldon choreographed for City Ballet just last winter.)

Though Lifar, who helmed POB for various periods in the 1930s, '40s and '50s, was a brilliant dancer, he wasn't an especially gifted choreographer. His abstract Suite has the no-nonsense, "Here is my technique, and what do you think?" feel of a classroom demonstration. It also, however, has 13 soloist roles, giving us a chance to get to know the company's star dancers. Vivacious, towering Marie-Agnès Gillot, one of the few POB dancers who exudes presence before doing a single step, was a special pleasure in the "cigarette" solo. (I'd love to see her do Ratmansky's cheeky version of that same variation, complete with real cigarette.)

Petit is generally at his best when he's telling a dramatic story, and L'Arlésienne -- with its hero, Frederi, tormented eventually to suicide by his love for an unfaithful girl from Arles, despite his marriage to another woman, Vivette -- certainly has plenty of drama. Petit uses the corps de ballet to represent the oppressive societal forces driving Frederi and Vivette together, and the black-clad pack's rigid, clumsily aggressive unison dances are the most successful parts of the ballet. Isabelle Ciaravola's delicately etched Vivette is heartbreaking in the couple's wedding-night pas de deux. But there are too many indistinguishable anguished solos for Frederi (the vigorous Jérémie Bélingard), and his over-the-top leap out of the set's giant window is pure camp.

Nicolas Le Riche and members of the Paris Opéra Ballet in Boléro. Photo by Stephanie Berger.

Then there's Béjart's big, blunt Boléro, which is all camp -- and all sex -- all the time. In various casts its soloist, who gyrates atop a red table, is a man, surrounded by men; a man, surrounded by women; or a woman, surrounded by men. (Women on women didn't do it for Béjart, apparently). The cast I saw featured Nicolas Le Riche and POB's most strapping guys, shirtless, of course. There isn't much to the choreography -- if you've seen Magic Mike, you've seen most of its suggestive undulations (actually, Channing Tatum could learn a thing or two from Béjart) -- but it's the Ravel that really does the seducing. No one can resist that iconic slow build, which brings POB's dancers to churning, pulsating life.

Orpheus and Eurydice, set to Gluck's opera, is classic Bausch: richly, extravagantly theatrical, a series of dreamscapes swathed in gauzy fabrics and adorned with spectacular set pieces. Bausch pairs each of the dance leads with his or her corresponding singer onstage, and the way she plays with these twins is masterful. (When Eurydice dies her final death, Bausch shows us Orpheus' inner and outer expressions of grief simultaneously: The dancer version of Orpheus staggers to the corner and huddles in private agony as his singer counterpart, holding the dancer Eurydice's body, sings a devastating aria.) The Parisians struggle with Bausch's style, which emphasizes upper-body gestures. In her works the legs need to feel weighty, rooted, to counteract the fluid airiness of the arms. The POB dancers pair light with light, prettifying what should be profound. 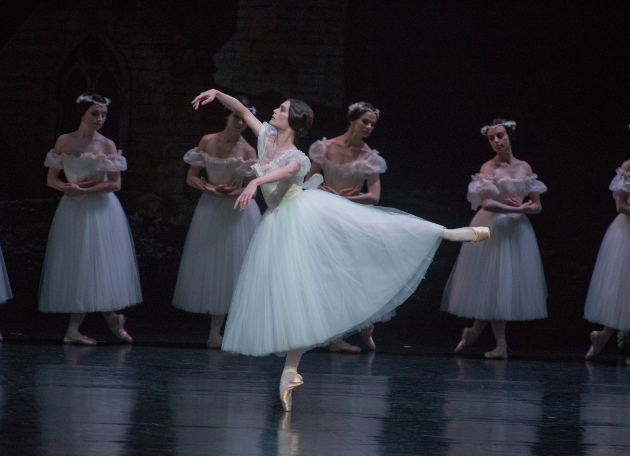 Aurélie Dupont and members of the Paris Opéra Ballet in Giselle. Photo by Stephanie Berger.

There's less to say, somehow, about Giselle. Though the old warhorse has the potential to transport, the POB version feels muted, almost sterile. The corps women, with their eerily, impossibly uniform bodies, make ideal Wilis, and Alexandre Benois' 1924 sets lend a magnificent sense of depth to the stage. (I especially love the second act's medieval church ruins, looming in the distance beyond the Wilis' woods.) But beautiful Aurélie Dupont's Giselle is too polite, too tasteful, and Mathieu Ganio's Albrecht, despite his admirable batterie, is a cipher. Theirs is a quiet, bloodless passion.

I had the opportunity to interview a few of POB's dancers for Pointe magazine, and they all seem intelligent, sophisticated, and fulfilled. They may be thoroughly classical animals, but thanks to POB's diverse repertoire, they know what's happening in the larger dance world, and they're better off for it. Onstage, wild, hungry American ballet dancers have the edge on POB's crystalline étoiles. But when it comes to programming, U.S. companies have a thing or two to learn from the French.

A former dancer and choreographer, Margaret Fuhrer is an associate editor at "Dance Spirit" and "Pointe" magazines.