After a 15 year absence from the United States, The Paris Opera Ballet, the oldest ballet company in existence, respected as one of the original sources for the art of ballet, opened its American tour at Chicago's Harris Theater for Music and Dance on June 26 for a six-day run before heading to the Kennedy Center in Washington, D.C, and the Lincoln Center in New York. Yes, you read that right. Chicago, then New York.

It has been an interesting time for Chicago. Chicago has always had a deep and rich cultural focus and history: it is home of the blues, it is the birthplace of modern architecture, it has the largest impressionist collection outside of Paris and it is a culinary Mecca for increasingly, internationally known chefs. And that's just skimming the top. Yet, Chicago hasn't always been recognized as a cultural tour de force. This may be changing. 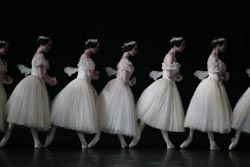 Recently Chicago has been flexing its cultural puissance in the international arena. On the heels of the G8 summit, the Roy Lichtenstein retrospective opened at the Art Institute of Chicago in May, before heading on to Washington D.C. in the Fall and then Paris. In 2011, Chicago became the city to win the most number of Regional Tony Awards and Chicago visual artist Theaster Gates just won the award for Best Show in a Commercial Gallery by the International Association of Art Critics - U.S.A.

Now, the Paris Opera Ballet. Not only did the Paris Opera Ballet open its American tour in Chicago, but its historic Giselle was simulcast live on a cutting edge LED screen system to over 13,000 people in the city's Millennium Park, the crown jewel of the Chicago Park District. Donna LaPietra, Chairwoman of Millennium Park noted, "With grand Lake Michigan at its side and nestled in the Jay Pritzker Pavilion in Millennium Park, designed by Frank Gehry, along with a sound system also designed by the architect, Giselle played live against one of the most famous and architecturally significant backdrops in the world, the Chicago skyline. What a package within a package within a package!"

Translated from our conversation in French, Brigitte Lefevre , Artistic Director of the Paris Opera Ballet, had this to say about Chicago as its choice as the 2012 tour opening city. "This city is a dream. With nature in the background, you feel both a completely modern city through its architecture, and a city with a strong sense of history from a previous century. It is the perfect compliment for our company, which performs both modern works and the classics, such as Giselle, which was created for us in 1841. We hope to bring the same complexity and beauty of this city to our performances here on the stage." 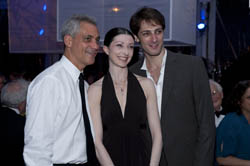 Chicago's Mayor Rahm Emanuel, a trained dancer himself, has been a leading force in shifting the scale of works that come to the city, as well as drawing attention to the city's focus on the arts. "From the splitting of the first atom to the building of the first skyscraper, Chicago is a city of firsts and a city that has been breaking records. We are now the first city to bring the Paris Opera Ballet, the oldest and one of the best ballet companies in the world, performing Giselle on American soil for the first time with the full 154 corps members, to thousands by simulcast for free. This comes only weeks before we open the 6th annual Chicago Dance Festival, the largest free dance festival in North America."

Michael Tiknis, the CEO and President of the Harris Theatre, was downright joyful at the opening night Gala. "Bringing the Paris Opera Ballet to the Harris Theatre has been in the works for many years and is largely due to having a mayor that is so dedicated to the arts and so supportive in ensuring Chicago as a world class cultural destination." 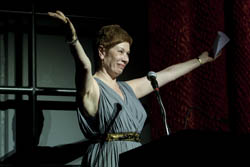 So it seems that Chicago's reputation as being the second city may be on its way out, particularly in relation to the arts. However, Madame Lefevre did mention to the staff at the Harris Theatre a trait of the Chicago persona that doesn't seem to be changing. When asked about how she felt regarding Paris Opera Ballet's opening night performance, she said, " The people have given us such a warm reception. We are very happy." Bienvenue, Madame Lefevre et Le Ballet de L'Opera de Paris, et merci!