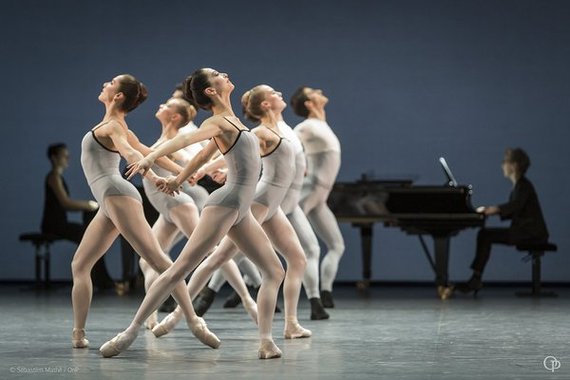 It's a daring thing -- to collect a list of names inextricably connected with one sphere and co-opt it for your own purposes. It's cheeky and bold, believing that you can reproduce something intrinsic to a specific culture and region and give it new wings. And it's wildly impressive if you play this game and win, proving that your prowess outweighs the conventions and designs that give a work's home space the leg up.

With its mixed bill of ballets by Alexei Ratmansky, George Balanchine, Jerome Robbins, and Justin Peck --all of which had their debuts in the United States -- the Paris Opera Ballet plays and wins. It's fairly astounding to watch Duo Concertant, Other Dances, and In Creases outside of an American technique (Seven Sonatas feels less uniquely American thanks to Ratmansky's legacy with the Bolshoi Ballet). It's even more astounding to see them done more justice by the French than by New York City Ballet principals brought up at the School of American Ballet or American Ballet Theatre dancers who devote a good percent of their repertoire to Jerry's old favorites and artist in residence Ratmansky's newest takes.

To be fair, both Balanchine and Ratmansky come from Russian backgrounds, not American. But if you ask nearly anyone in the dance world, he or she would claim that Balanchine was the father of an American ballet style. Meanwhile, Ratmansky is the liaison between tradition and novelty at ABT, one of the U.S.' most acclaimed companies. Of Robbins' and Peck's ties to the states, there is no debate.

It is rare to see a dance show at Lincoln Center that does not include at least one of these names on the program. But to see them featured in Paris frankly took me by surprise, and then it made me very happy, because I only had to fly across an ocean to recognize the pure genius of our primary American choreographers.

This is because Benjamin Millepied's company imbues them with breath and life sometimes missing on home soil, where they're often overdone and under-curated. While Millepied made headlines this February by announcing his departure from the Paris Opera Ballet to return to Los Angeles with his wife Natalie Portman and concentrate on L.A. Dance Project, his years with the troupe certainly haven't hurt it. He has his ensemble dancing at a ridiculously high level on the global stage, with tremendous artistry as well as crisp, clean technique.

But most impressive is the dancers' musicality. They all have acute ears that can pull out the strains of scores by masters like Igor Stravinsky and Philip Glass, extending the choreography so that it harmonizes with its accompaniment. Balanchine and Robbins were celebrated for their ingenuity when it came to music, and part of why Peck has emerged so prominently over the past few years is his sensitivity to melody. And so to see these ballets, which revolve around a deep relationship to music, performed by dancers who understand the intricacies of the scores is what truly differentiates this program from its parallels across the pond.

While Aurelia Bellet was on point in Seven Sonatas, it was Amandine Albisson in Other Dances who truly stood out. She was, and I don't say this lightly, the best female dancer I have seen in a very long time, perhaps since Nina Ananiashvili gave her farewell performance as Odette/Odile. Her connection with pianist Vessela Pelovska allowed her to maximize each movement, emphasizing certain moments in Frédéric Chopin's chords with timeless suspensions in arabesques or jaunty mazurkas that felt light, as a mazurka should be, instead of the typical heaviness when character is infused into ballet. Albisson is a star, not only because she has been designated an étoile by the Paris Opera Ballet, but also because she exudes the demand to be watched and turns choreography into the best version of itself.

Myrian Ould Braham and Karl Paquette's Duo Concertant was also very well done, precisely because it is another piece that relies heavily on a mutualism between dance and music. Both étoiles showed respect and deference to the musicians, leaving egotism elsewhere. The performance was about the work. The dancers were not bored standing behind the piano and listening as a violin sang, and it seemed natural and willful when they accompanied the music with movement. And so they transformed into Balanchine's boys and girls from the choreographer's golden age. They looked incredibly youthful -- indeed, everything looked incredibly youthful that night. Not because of naiveté or immaturity, but because the dancers still seemed energized, not yet tired of the project they had been assigned.

And now, for an apology. I have never been a huge fan of Peck. His choreography, to me, has often felt contrived and derivative of Balanchine's, like a carbon copy of something that came well before his time. But, Mr. Peck, I must now say sorry for every negative word I've written about you, as it turns out your hype is justified. On the Paris Opera Ballet, In Creases adopted a totally new dimension, feeling very much of the 21st century and very, very progressive. Peck has an extraordinary talent for male choreography especially, which was dynamic like a Kandinsky painting in that it physicalized music. It gave music an image, like a universal version of synesthesia. Thus, it only took a corps that could reveal the complexities of Peck's relation to the score to bring out and showcase his brilliance, which I now recognize.

And so the Paris Opera Ballet has beat us at our own game. Sometimes it only takes a fresh pair of eyes to see new folds of beauty in what we treasure most.