AMMAN, Jordan -- The recent barbaric violence in Paris claimed victims in France, but also beyond. Despite no clear evidence that one of the attackers posed as a refugee, some politicians, including heads of state, are using the terrorist attack to justify border closures for Syrian refugees. This response is morally, legally and strategically wrong.

The people fleeing war in Syria are trying to escape the same devastating and indiscriminate violence we saw in Paris. Denying them protection violates international law and offers what the Islamic State aims to achieve: borders between people, coexistence denied.

The proper response to violence, terror and suffering is not to withdraw, but to extend. Instead of denying human rights and closing borders to refugees, which ISIS would love to see, we should find new ways to protect rights and help the displaced, both those who stay in the region and those who try to reach Europe.

Take, for example, Khaled and Leena, two young Syrian nurses with four children, who I met in Jordan recently. They desperately want to use their medical training to help Syrians and Jordanians in need, but they are not allowed to work. Having spent their savings, this young couple now find themselves in the same situation as millions of other refugees from Syria spread across neighboring countries who depend on emergency relief to keep a roof over their heads and to feed their family.

Khaled and Leena are on the verge of despair. They told me how they crave to work but, with the present restrictions, they risk being arrested and even deported back to the warzone. Without an income, they face two stark choices: go back to Deraa, where their desperate relatives say the fighting is worse than before, or take the dangerous trip to Europe.

Khaled and Leena are not alone. Almost five years into the largest refugee crisis since World War II, hundreds of thousands of refugees have seen their savings dry up and their debt rise. Unable to earn an income legally, many are forced to send their children to work. Many of the communities hosting people like Khaled and Leena face the prospect of overstretched health and education services and collapsing infrastructure.

The proper response to violence, terror and suffering is not to withdraw, but to extend.

Worse still, refugee families increasingly find themselves in legal limbo, unable to secure the documents needed to remain in the countries neighboring Syria. Some 70 percent of Syrian refugees in Lebanon lack the legal documents required by the authorities to stay in the country. Half of the refugees in Jordan living outside of camps are at risk of losing access to aid and public services because they lack updated documents.

To address the scale of the crisis faced by refugees, the communities hosting them and those still trapped in Syria, humanitarian aid alone is not enough. Aid agencies cannot adequately provide for the needs of over 4 million refugees now in their fifth year of displacement, and they cannot properly support the communities struggling to host refugees. We cannot give hope through our hygiene kits, food vouchers or blankets. We are now beyond the emergency phase. This is not sustainable.

To address these challenges, we need to think big. The Marshall Plan that was set in motion after World War II offered an all-encompassing, ambitious initiative to rebuild and invest in Europe. That is the kind of deal we need today for Syria's refugees and the host governments in the region. With no end to the conflict in sight, it's not the time to talk of reconstruction in Syria.

For now, this new deal must provide massive new investment in Jordan, Lebanon, Turkey, Iraq and Egypt, supporting infrastructure, strengthening services and creating new jobs for both refugees and citizens of host states. In turn, refugees need to be allowed to register and live legally in these countries, contributing to their economies, until they can safely return home.

Instead of denying human rights and closing borders to refugees, which ISIS would love to see, we should find new ways to protect rights and help the displaced.

Of course, there are challenges. We have seen in Europe -- with far fewer refugees and over a much shorter period, what happens when there is a leadership failure. Wealthier nations have to shoulder responsibility for this global crisis. For many, the only sustainable option is to seek asylum and protection through a safe route to countries outside of the region. A year ago, refugee agencies working in the Middle East asked for the resettlement of at least 10 percent of Syria's refugees, but governments have committed to only 3 percent and the process is mired in obscurity.

It is not hopeless. Finally, the external actors, including the U.S., Russia, Iran, Saudi Arabia and Turkey, are sitting together with the UN to design a real peace process. A donor conference for the Syrians will be jointly hosted by the UK, Germany, Kuwait and Norway in London in February. Refugee hosting governments are giving positive signs of wanting to do more to allow refugees to help themselves. Now world leaders from wealthier states in Europe and elsewhere must respond and present a credible plan for investing in the future of the Syrian youth. Too many promises have been made to help refugees and host states without sufficient money and action.

A political process is the only solution to the Syria crisis -- there is neither a humanitarian nor a military solution. But until that happens, world leaders must help refugees and the countries hosting them from sliding into destitution, with global repercussions. That is the response that the barbarity in Paris deserves.

PHOTO GALLERY
These Are The Terrifying Syrian Refugees Coming To The U.S.
Download
Calling all HuffPost superfans!
Sign up for membership to become a founding member and help shape HuffPost's next chapter
Join HuffPost

The Response Paris Deserves: a Marshall Plan for Refugees in the Middle East
These Are The Terrifying Syrian Refugees Coming To The U.S. 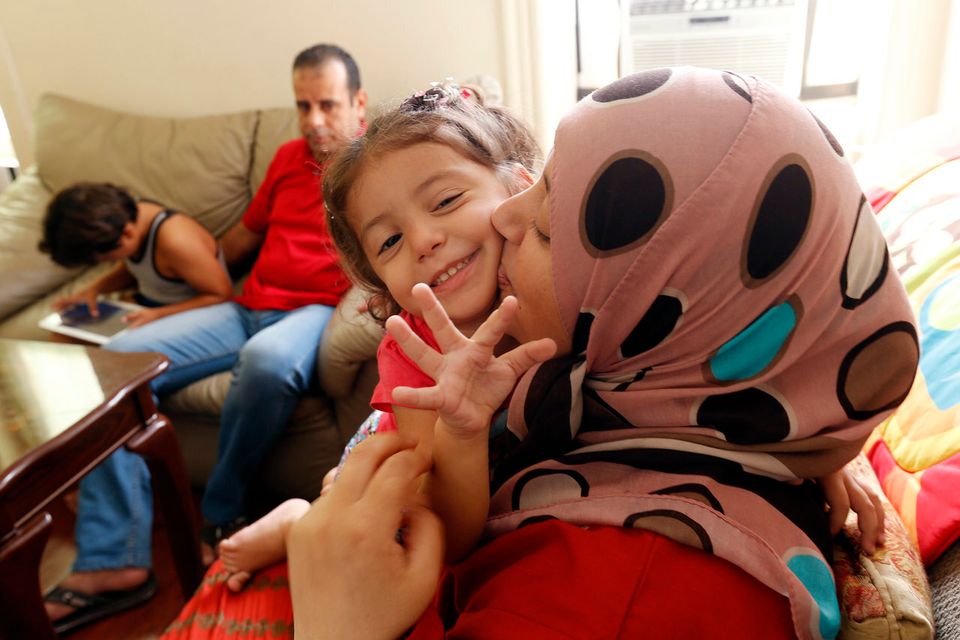 1 / 20
Maaesa Alroustom, center, is kissed by her mother, Suha, as her father, Hussam, back, sits with her brother Wesam in their apartment in Jersey City, New Jersey, Sept. 16, 2015. The Alroustoms are refugees from&nbsp;war-stricken Syria.
ASSOCIATED PRESS