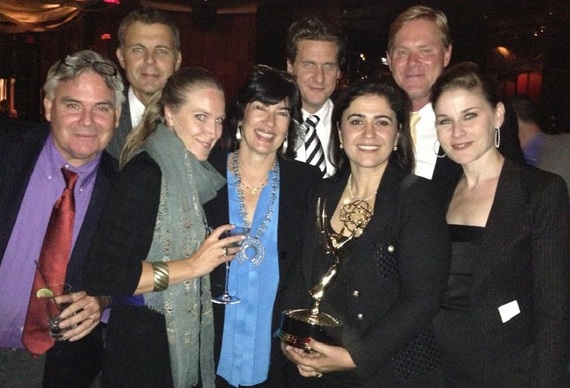 With the goal of harnessing the untapped potential of Iranian-Americans, and to build the capacity of the Iranian diaspora in effecting positive change in the U.S. and around the world, the Iranian Americans' Contributions Project (IACP) has launched a series of interviews that explore the personal and professional backgrounds of prominent Iranian-Americans who have made seminal contributions to their fields of endeavour. We examine lives and journeys that have led to significant achievements in the worlds of science, technology, finance, medicine, law, the arts and numerous other endeavors. Our latest interviewee is Parisa Khosravi.

Parisa Khosravi is the founder and president of Payam Global Strategies LLC. Khosravi recently retired from CNN after nearly three decades with the company. Throughout her career as Senior Vice President of international news gathering, domestic news gathering and global relations for CNN Worldwide, Khosravi led CNN's historic coverage of countless award-winning news stories. As a CNN executive for over two decades, she led CNN's key international editorial relationships and finally as the first-ever global Ambassador for CNN, Khosravi met and liaised with world leaders and decision-makers. Khosravi is a recognized authority on safety and security matters for her meticulous and decisive management of CNN's teams as they covered the world's most dangerous hotspots, conflicts and natural disasters. Khosravi is also an expert on crisis management, multiculturalism and women-in-the-workforce issues. With unrivaled commitment and passion for international news, Khosravi orchestrated CNN's largest investment in international news gathering in its history. Khosravi will put her experience and global relationships to use in order to make positive change happen and advance humanitarian causes with her new endeavor.

Who is Parisa Khosravi? Can you tell us about your background, both personal and professional?

I was born and raised in Tehran and came to the States just before the Revolution in '79. I grew up in Chicago and studied broadcast journalism as an undergraduate and was recruited by CNN right out of school. I worked my way up from an entry-level position right after graduation to Senior Vice President in charge of all of CNN's international news coverage and, for a period of time, I also oversaw domestic coverage. I became the company's first-ever global ambassador, which meant meeting with world leaders and officials, dealing with crises and ensuring CNN teams had access to difficult and challenging parts of the world.

What has been your personal key to success? Who and what were the biggest inspirations for your career?

Doing what you believe in and hard work. I think one's accomplishments are most rewarding when we put in the time and pay our dues and earn each step up the ladder based on our own merit. My joy and passion in journalism was an opportunity to give a voice to the voiceless.

What would you say are the most profound changes that journalism has undergone in the in last two and a half decades? You were responsible for CNN's entire international and domestic news gathering operations including more than 100 correspondents at the network's 45 bureaus worldwide. What are the main challenges in gathering international news? Are Americans more or less informed about international news today?

In the past three decades, the changes in journalism have indeed been profound. Journalism used to be much more about reporting and being in the field. Two areas which have especially changed the way we gather news are technology and safety. We used to have to haul around two-thousand-pound satellite dishes in order to transmit live breaking news. Now we can do a live shot with our cellphones.

As journalists we used to be treated like the Red Cross; we were the neutral zone. I have a souvenir t-shirt from a conflict zone in Africa from a couple of dozen years ago, on the front it says: DON'T SHOOT; on the back, it says: PRESS.

We used to announce ourselves. Nowadays, you might as well put a big target on your back, as journalists have unfortunately become the prime target and the biggest prize in so many conflict zones.

The advancement of technology has democratized the media, and the speed and flow of information have increased exponentially. We have unprecedented access to information and news, but are we more informed?I don't believe we are. There is much disinformation out there now.

How can West Asian/Middle Eastern people become more accurately portrayed in the mainstream media and in the majority's imagination?

I think no matter where we come from, our background provides us with unique and valuable insights and perspectives. I think as citizens of the world we should all be more proactive and engaged in our communities. No one can represent us better than ourselves.

What are some common myths about the journalism profession?

Journalism is not about being a celebrity. Our society has become obsessed with the celebrity culture and some enter the journalism field thinking it is a glamorous life.

What is the biggest challenge that you have faced in your career?

Letting some stories and images go, especially when it involves children in dire situations and difficult places.

Can you share some specific highlights of your work?

I got to meet some amazing people in my 28 years at CNN. I traveled the world over and met Popes and Presidents and everyday people. I got to witness history from the front row seat; the responsibilities were awesome, humbling and sobering. I have seen humanity at its best and at its worst. It is tough to pick specific highlights, however, one thing I am very proud of is that I was able to build the most international team at CNN, both in our newsroom and in the field giving us incredible strength to react to breaking news and cover the world as comprehensively as possible.

This question speaks to your exemplary humility. How much of your success and the trait of modesty would you attribute to your faith and belief system?

Thank you for the kind compliment. It is important not to let one's title or position in life to go to one's head and feed one's ego. I am an optimist by nature and take life and all its challenges and opportunities as lessons which can help me grow and evolve.

As a Zoroastrian, I have been raised with our three principles of: Good Thoughts, Good Words and Good Deeds. I have always tried to live by these simple, yet all-encompassing values which have kept me humble and positive.

What does it mean to be an Iranian- American to you?

I am a proud Iranian-American. I don't think of myself as an immigrant; America is my home.As someone of Iranian origin, I am proud of our 2600-year-old heritage and what it has contributed to the world through its rich history. Cyrus the Great wrote the first ever human rights charter which called for freedom of speech, freedom of religion, and freedom of movement.This was more than two and a half thousand years ago! Think about it.

Thomas Jefferson was an admirer of Cyrus the Great and studied Cyrus as the founding fathers wrote the Bill of Rights. As an Iranian-American, I cherish the best of both cultures.

Iranian-Americans are one of the most accomplished and successful group of immigrants United States has ever received. And this makes me think that if for all these years, we had all introduced ourselves as Iranian-American rather than just saying "Persian," it would have made a huge difference in the awareness and appreciation of our community's contribution to this wonderful land of opportunity. As you know folks don't always equate the two and in some cases, they don't even know they have met an Iranian-American and that is our own fault.