Courtesy of Jim Newell and Mark Borden comes some photographic documentation of how the dialogue over the proposed Park51 cultural center is proceeding.

Not well, as it turns out! Park51 opponents have apparently taken to driving a decommissioned missile, adorned with anti-"Ground Zero Mosque" advertising, around the site of the proposed center. As we've learned, using military ordnance to stage daffy PR campaigns in Manhattan is always a terrific idea. 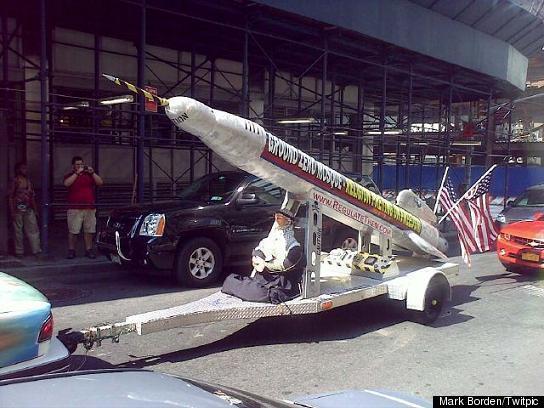 So, is this decommissioned-missile based advertecture becoming a thing? Apparently so! Here's Rachel Slajda at TPM:

The owner of the missile is an ad agency called JetAngel, which until recently was a charity that carted decommissioned missiles and jet cockpits to children's hospitals to cheer up the kids. But now, as the agency's owner describes in a CraigsList ad, it's "now turning in to an advertising business."

From its sales pitch:

Our goal is to 're-commission' these aircraft to share the excitement of jet flight and engage the public by telling the stories that make up our history. In doing so, we can also provide a new venue for national advertisers and sponsors that has no equal in reaching consumer attention.

Aside from generally wondering what might have been if missiles had been injected into Washington, DC's "Jumbo Slice Wars," the thought occurs to me that this is the precisely the sort of tactic that's okay for some people to do and not others. For instance, I imagine that if I schlepped up to the Dena'ina Civic and Convention Center in Anchorage, Alaska with one of these missiles and pointed it at the September 11 Glenn Beck And Sarah Palin Cuddle Party, with advertising that read "Check Out This Month's Issue Of Vanity Fair," I would expect to be universally condemned by the entire world. I suppose I could very easily put this theory to a test. What stops me is the fact that I am an adult.

Nevertheless, if these missile-trawling yutzes want to make a big impression, why not incorporate Choire Sicha's "Ground Zero Mosque B Movie Poster" into their design?