I'm a mathematician and am constantly amazed that the world around us can be described mathematically. All it takes is a combination of a handful of simple mathematical concepts. I'm insatiably curious, and I want to understand how things fit together, so, I get involved in many kinds of scientific problems -- everything from the changing statistics of extreme rainfall, to the behavior of life at the scale of molecules, to analyzing voice and speech recordings for forensics. But there's one project, on Parkinson's disease that has occupied me for the last seven years. I fell into it almost by accident.

It is estimated that between 4 and 6 million people worldwide have Parkinson's. Because the disease is more likely to affect older people than younger, and because the population is aging and growing, that figure is expected to rise. Parkinson's primarily affects movement, the 'classic' symptoms are uncontrollable and unwanted motion in the limbs, which looks like shaking or tremors.

I can only imagine what it is like to suffer from a neurological disease. But like so many of us, I have a friend who is affected: Jan Stripling, who used to be a virtuoso ballet dancer. I thought it particularly cruel for him to suffer from Parkinson's, having lived a life dedicated to the performance of the most elegant, controlled movements. But actually, he tells me that it is the little things we all take for granted -- such as buttoning a shirt -- that frustrate him most now. 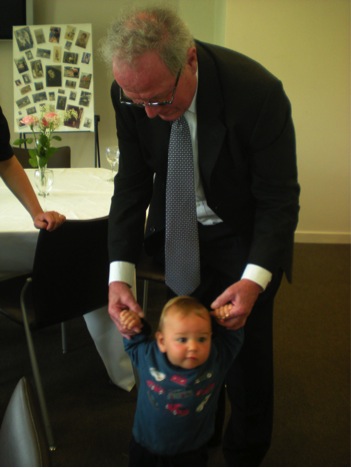 Jan Stripling and my son, Zak. (Photo by Max Little)

What can I do to help? I'm not a health care professional -- so I can't help directly and I found this very frustrating. I was, however, fortunate enough to have met someone who was involved in a medical research project into Parkinson's, which had recorded the voices of around 50 people weekly. As it happens, although I don't know much about neurological disorders, I do know a lot about the voice and sound. In my PhD at Oxford, I had developed mathematical algorithms for detecting voice disorders, and when we tried these algorithms on Parkinson's voices, we were able to detect those with the disease, with around 86 percent accuracy.

So, for me, it was the chance discovery that voice is affected as much by Parkinson's as limb movements, that set me on the path of trying to detect and monitor Parkinson's using voice recordings. In collaboration with one of my students, I worked for several years and now have algorithms that, in the lab, reach around 99 percent accuracy in detecting the disease. We also know how to predict the severity of symptoms to within a few percentage points of clinical judgment.

The goal of my research, then, is to discover ways to adapt those mathematical tools to help solve new problems. This process has extraordinary depth and is always fascinating.- Max Little

Current symptom tests are done in a clinic. They are expensive, time-consuming, and logistically difficult. So mostly, these tests are not done outside clinical trials. Our technology could enable some radical breakthroughs, because voice-based tests can be administered remotely, and patients can do the tests themselves. Also, they are high speed, taking less than 30 seconds, and since they don't involve expert staff time, they are ultra low cost. That makes the technology massively scalable.

There are many areas of medical practice and research where we think this could have an impact -- for example, reducing the need to visit the clinic to find out how the disease is progressing. We could do high-frequency monitoring for individualized treatment decisions. This might allow clinicians to optimize drug timing and dosage. For clinical trials, we could do cost-effective mass recruitment for new treatments. By recruiting very large numbers into trials we could help speed up the search for a cure. And finally, this could enable population-scale screening programs, that might allow us to search for 'biomarkers' that show early signs of the disease before the damage done is irreparable.

Recently, we set up the Parkinson's Voice Initiative with the aim of collecting 10,000 voices from across the world, using the standard telephone network. We wanted to test the technology outside the lab. We had a massive public response, quickly reaching the target in just a few months.

This incredible and unique dataset will tell us whether it is possible to use something as ubiquitous as the telephone to detect and monitor the disease. This now becomes a 'big data' analysis problem, and until the analysis is done, we can't know for sure if it will work. But if it does, we would have the technology to check out some 75 percent of the world's population at a negligible cost.

This analysis problem is already raising many new mathematical challenges that require me to design new algorithms. And as always, I'm finding that these algorithms have uses outside Parkinson's and biomedicine. One particularly fascinating application is the detection of extrasolar planets -- that is, planets circling other stars.

One way to detect these planets is to monitor the brightness of the host star: when the planet passes through the line of sight, it dims slightly, and this dimming is very good evidence for the existence of planet. But the brightness signal is extremely noisy, so, removing the noise requires specialized mathematical algorithms. It turns out that these algorithms have a lot in common with those used to analyze voice signals in Parkinson's!

This is the pattern I find in my mathematical research: a particular problem requires a mathematical solution, and I find that I already have a useful algorithm in my 'algorithm toolbox.' The goal of my research, then, is to discover ways to adapt those mathematical tools to help solve new problems. This process has extraordinary depth and is always fascinating.