After flashing forward to reveal each character's future, the series finale of "Parks and Recreation" paid tribute to another important part of the team. The episode ended with a message in honor of series co-executive producer, writer and guest star Harris Wittels, who died last week.

"We love you, Harris," read a message after the credits rolled. Harris also appeared multiple times on the series as an employee from the animal control office. 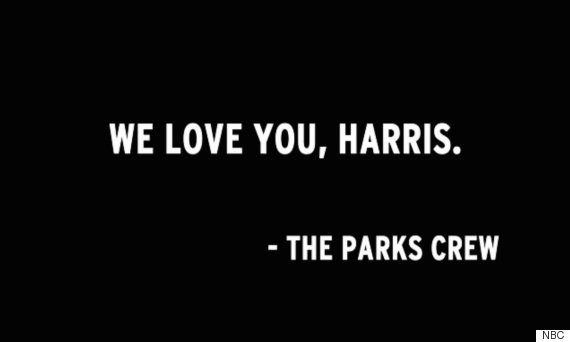 "My favorite thing about Harris … when we used to do our table read ... Harris is so fucking funny," said "Parks and Rec" star Retta in an interview with The Huffington Post on Tuesday. "He would commit to whatever character he was reading in our table reads. Harris never didn’t get the laugh. There was never a point where a joke didn’t land when Harris was reading. You couldn’t have all the guest stars at the table read, so they would split up the characters among the writers to read at our table read. Harris always got the laugh. Fucking hilarious."

Amy Poehler also recently spoke about the 30-year-old writer and comedian last week at the unite4:humanity gala. "I lost a dear young man in my life, who was struggling with addiction and who died," Poehler said. "At the end of the day when things happen in our lives we turn to the people that we love and we look to our family and our community for support and we lean on people in a hope that they will ease our pain."

Goddammit. Addiction takes another. Goodbye Harris Wittels, you were so funny and so sweet. It's a pleasure to have known you. #ParksandRec

Aziz Ansari, who was close with Wittels, wrote a letter on his Tumblr account last week in dedication to the writer. "There are so few people that you meet in life that give you that feeling that you’ve found a real unique, original person," Ansari wrote. "Harris Wittels was one of those."