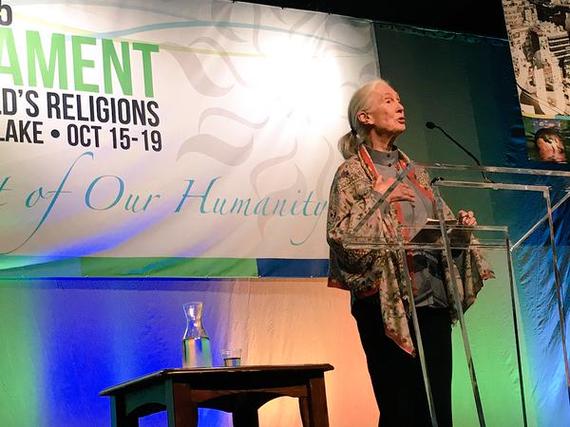 Dr. Jane Goodall, renowned British anthropologist and UN Messenger of Peace, speaks at the plenary session on war, violence and hate speech at the 2015 Parliament of the World's Religions in Salt Lake City (photo: onislam.com)

I just returned from the Parliament of the World's Religions in Salt Lake City. For five days, October 15-19, approximately 9,500 people from over 50 different faiths from all over the world gathered to share their beliefs, learn about each other's faiths, and to find common ground to work toward peace and ecological harmony. I am a former Mormon turned Pagan and Unitarian, and my LDS wife and I are raising our two children in a multi-faith household, so my interest in interfaith work is a practical one.

The Parliament was an amazing experience. Among the big name speakers were Jane Goodall, Karen Armstrong, Eboo Patel, and many others. (The Dalai Lama had to cancel due to an illness.) But even more amazing were the attendees. Gathered in one place were Catholics and Protestants, Buddhists and Jains, Muslims and Sikhs, Hindus and Pagans, members of various indigenous faiths and others. The sentiment that I heard expressed repeatedly over the long weekend was: "What if the world were like this? What if the Parliament of the World's Religions represented reality?" It is a powerful thought. What would that world look like? As I thought about it, there were three ways in which the Parliament, as I experienced it, was different.

You might think that all the talk at the Parliament was about what we have in common. There was plenty of talk about oneness and harmony, but there was an equal amount talk about our diversity, about the uniqueness of each faith and each adherent. For five days members of the most diverse religions not only co-existed, but created community together. How was this possible? There was no proselytizing. And the conversation was intentionally inclusive. But more than anything else, I think it was an attitude of curiosity which set the Parliament goers apart. People genuinely seemed interested in one another's differences. They sought to understand, before they sought to be understood. Questions, not answers, were the order of the day.

Certain religions were probably underrepresented, including those which believe it to be their religious duty to preach their particular good news in every situation, and those who hold exclusivist attitudes toward questions of religions truth. But some the more curious members of even those faith communities were present. And perhaps they will carry this curiosity back home with them to their own communities as unofficial ambassadors of religious harmony.

Running throughout the Parliament were several interweaving thematic threads, including a concern for ecological sustainability, the empowerment of women, and caring for the least privileged among us. Activism and mysticism merged at the Parliament. At the plenary sessions, Sikhs, Muslims, Jews, Christians, Wiccans, Hindus, and others shared the stage and expressed their concern for the most urgent issues of our day and shared their visions for a future of ecological and social harmony. With words of power drawn from deep reservoirs of faith, they inspired us to translate our beliefs into action. 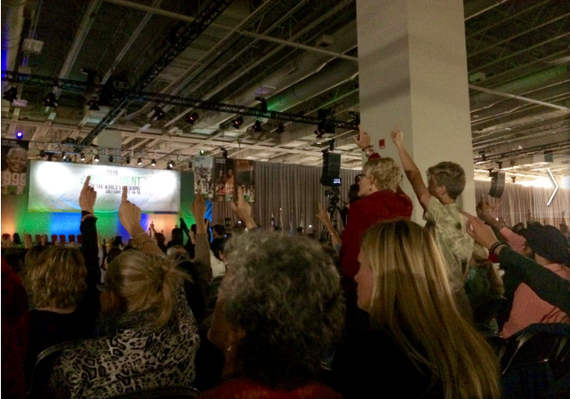 Women raise hands in support during the "One Billion Rising" video presentation showing women around the world rising up against acts of violence. (photo: Kjersten Johnson, The Digitial Universe, BYU)

One of those passionate voices was Marianne Williamson, an internationally acclaimed spiritual author and lecturer, who spoke at the women's plenary session. She declared that every women is a priestess, and that women need to answer the call of that "still small voice within and lay it down wherever we are." Williamson went on:

At this, the crowd stood and cheered. "The divine goddess is not just beautiful. She is fierce!" declared Williamson.

In contemporary American culture, outward expressions of faith are often discouraged. Sometimes, a person can feel ostracized even for wearing a simple cross or pentacle on a necklace in public. But the Parliament was a different experience altogether. Everywhere I looked, I was surrounded by expressions of the sacred. From the Buddhist sand mandala to the Jain shrine, from the smell of burning sage being used by First Nations people in ceremony to the sounds of myriad forms of sacred music to the diverse expressions of faith in dress and habit. There were robes and head coverings of every conceivable color and form. The orange robes and bald heads of Buddhist monks and the turbans and beards of Sikh men were the easiest to identify. But they were only the tip of the iceberg. The sacred was present everywhere I looked and in every voice I heard. 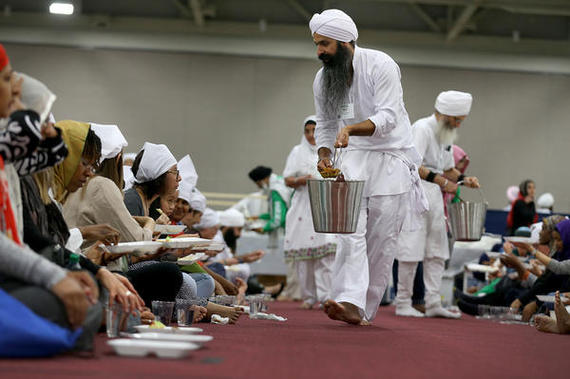 Members of the international Sikh community and a host of volunteers prepare and serve thousands of communal meals, langar, each day to people taking part in the Parliament of the World's Religions in Salt Lake City. (photo: Laura Seitz, Deseret News)

Perhaps the best example of this was the Sikh Langar. As an expression of their faith, a Sikh organization, the Nishkam Center, provided free lunches to everyone who attended the Parliament, regardless of their faith. The experience was a highlight of the weekend for me, a beautiful example of the sacralization of the act of eating. As we entered the hall where the meals were served, we were asked to remove our shoes and given white head coverings, which we wore as a sign of respect. As many as 6,000 people participated on any given day. We sat in lines on the ground and were served by volunteers of various faiths who expressed their joy in serving. They continued to serve attendees until they were filled. The food was excellent (if a bit spicy). There was no overt act of worship, but I left feeling like I had experienced real communion -- both with my fellow attendees and with the divine.