It's no secret my passion for all things fashion. So each time I get the opportunity to come back to the USA -- and indeed this rockin' rolling city of New York -- I like to be a little adventurous, so I set myself a little task. I would seek out the hottest young designers and future fashion stars from none other than Parsons, the School of Fashion based in New York City.

After a little online research, it's pretty clear to establish that this school runs one of the most high profile fashion programs in the world and has launched some pretty impressive careers. Think Donna Karan, Marc Jacobs, Tom Ford, Narciso Rodriquez, and the new guns Proenza Schouler, Behnaz Sarafpour and Ohne Titel. Pretty cool, right?

So after spending literally hours online with my big sister Tessie (my in-house stylist) and going through all the coverage we could find about this year's graduate crop, we selected my four favorite looks. Yes, these would be perfect for my week in NYC. I was in town for some promotion and some intimate gigs, so I needed to look my best. Plus, I kind of feel a sense of synergy with these guys. It would be fair to say that we are all at the start of our journeys. We work really hard and are super ambitious and want to share our talents with the world. I am actually in awe of their talents to be honest, because I literally just sing. Sure, I spend hours and hours rehearsing, but their craftsmanship in their clothes can take weeks -- months even -- and that's just the start. So the only way I could really get inside their mind was to ask them, so I did!

Francine Frohlich wanted to be a fashion designer since the age of 11. Her parents always enrolled her in drawing and sculpture classes when she was little (take note mums and dads). Her grandfather owned his own garment factory so he used to bring home a lot of pretty dresses for her, which is where it all started. Francine is also really tiny, and growing up there were never any clothes that fitted her, nor did she like what she saw in stores and always imagined a world with what "should exist" and what she would want to see on hangers.

My collection was derived from a nightmare that I had. It was a lucid dream that I felt I could not get out of, that kept going on and on. When I woke up I was able to remember certain parts so vividly that I felt compelled to record it through drawing and collage, inevitably drawing inspiration from the imagery I had seen and collected. Essentially in the dream I was being pursued by ghouls who were wearing a collection I had designed, which was a funny sight. The scene in which I drew the most inspiration from was where I found myself in a deserted field, in front of an ominous looking cathedral with ghouls coming toward me. I was faced with facing my demons, or entering the abandoned cathedral. I began researching structures of gothic cathedrals, and that is where I took a lot of the construction and panels in my garments from, as well as the three dimensional appliqué that I created.

Let me tell you when I had this look on in the streets of Manhattan; I was literally stopped with people admiring the incredible detail of the cathedral on the skirt.

But what is also interesting for us teens is how these artists never stop. Francine told me that she loves to visit museums and collects imagery that she might use as inspiration for future projects. She immerses herself in reading about different societies and cultures because she simply loves what she does.

Next we turn to Josh Tafoya. Josh is pretty much like you and me -- he loves snowboarding, shopping, listening to music but then there's that special thing inside, that creative fuse for design that allows him to deliver some seriously clever and well constructed catwalk looks. I simply couldn't resist Josh's dress. Firstly, because of its beautiful shape, slim line bodice with an abundant flowing skirt, bejeweled and screen printed with a host of famous celebrity faces including Lady Gaga, Iggy Azelea and yip, Justin Beiber! They were portrayed in graphic prints wearing religious regalia and papal insignia -- quite rebellious but very clever -- even if I did end up with Justin Beiber on my butt! Josh dreams of starting his own label one day and given that his collection merges the religious connotations of the Chicano culture and transfers them to modern day pop culture in a dress -- it's a pretty good start!

Sumaiyah Aktar again knew she wanted to be a designer from a young age. She was drawn to art, painting, and drawing which gave her the ability to transform her ideas and emotions. She started to take art classes from the age of 8. With her mother and sister enjoying art too and her grandfather being an architect, it was no doubt in the genes!

Being born and raised in the Middle East and then moving to NYC allowed her to assimilate the different cultures. When I asked Sumaiyah what inspired her she said:

Each life experience is a metaphorical shadow of our multidimensional selves. The link between the movement of shadows and the journey of our life experiences, both of which are ephemeral in nature, became the primary the source of my inspiration.

So I'm not gonna lie -- this was a bit heavy even for me but you know when you look at her elegant and sophisticated collection, it just fits. Her shirts are kind of ethereal and the contrast of fabric on the skirts work incredibly well. In a way, she's almost like Donna Karan a little with a hint of an Armani in there too. A timeless elegance that means you can buy something and it will last forever in your wardrobe! Just sublime!

Finally we come to Joseph Singh. Joseph breaks away from the mold of "being born with the idea." He was supposed to be a brain surgeon -- can you believe it? After a few years studying law amongst other things, he decided to purse a secret dream -- one that he hadn't shared until this point -- his dream of becoming a fashion designer. He did happen to have the drawing skills though, which clearly is a running theme with all these grads. 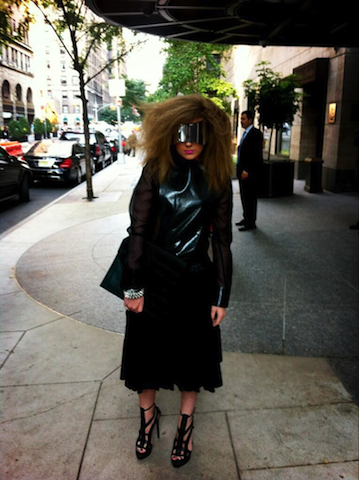 Joseph is fascinated by the interaction between people and their surroundings, body versus space, the order and arrangement of things around him, and the contrast of opposite ideas. His work focuses on surface, with fabric as a starting point, and is primarily characterized by dark and mysterious themes.

But what really struck me about Joseph was about his loss and the effect it has had on his life.

Seven years ago, I lost my grandfather -- a man with whom I was incredibly close. Moving forward after my grandfather's loss was not only painful but a struggle I have been dealing with for several years. In devising my senior thesis collection, I was inspired by his funeral, as well as my ensuing efforts of accepting his passing and allowing the hurt and pain of the loss to dissipate. Using advanced techniques such as laser cutting, I was able to create a new way of pleating, and pushed that idea further throughout the process. As the collection evolved, it became this idea of dissipation and officially letting go. By symbolically letting traditional pleating go, I also was coming to terms with his being gone. Moving through the collection, the pieces become much softer and more delicate; eventually, it finishes with a full white gown. I know deep down that my grandfather is physically gone but his spirit remains. Always knowing that his spirit is guiding and protecting me, I will continue to move forward in life and in design.

Well, I can tell you than when I went to the Friars Foundation Applause Gala this week, which was attended by Katy Perry, Joan Rivers, Robert De Niro and co., and wore a Joseph Singh creation. Complemented by the coolest Alexander McQueen visor that Joseph had paired with the look, it had them all talking. "Who was I wearing?" the media shouted. I was standing tall, honored of course to be wearing Joseph, but also thinking how great it was to work with this new crop of amazing talent. They were all like me, with big dreams and huge ambitions and why not! 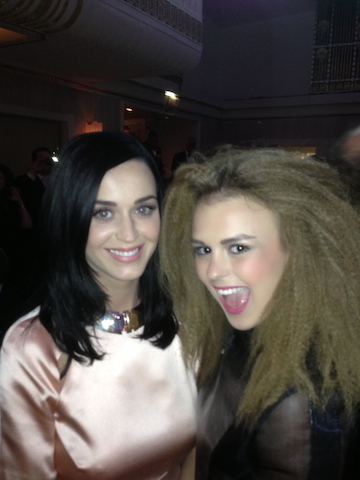 So what have all you budding fashion designers learned from this? Get drawing, get to art classes. Get a portfolio, sketch pad, get inspired, and make it happen. It's in all of us if we really want it -- you just can't give up! And finally thank you to all of these Parsons grads for allowing me to wear their looks. I certainly know where to go when I need my tour wardrobe designed...