In Part and Parcel, Hannah Stephenson talks with writers and artists about a fascinating facet of their creative work. 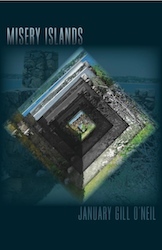 The image of an island carries a number of emotionally-charged, conflicting connotations: isolation and tranquility, limitations and freedom, the unfamiliar and the yet-to-be-explored. January Gill O'Neil's newest book of poetry, Misery Islands, shows us how easily our lives can become storm-tossed and tumultuous.

The Misery Islands are real islands that belong to Massachusetts (much like O'Neil herself, who runs the Massachusetts Poetry Festival). And in this book, yes, there is misery and suffering, but we aren't shipwrecked. What I love most about the book is that it doesn't wallow. Each of these poems is an island, a sanctuary, a place to wait out the storm (even if we have to change course).

NOTE: My questions appear in bold. After the mini-interview, you'll find two poems from the book (both of which appear with the permission of the author) and the author's bio. (Photos courtesy of the author; photo of the author, below, by Rachel Eliza Griffiths.)

Q: While reading Misery Islands, I was struck by the vulnerability of these poems. The vignettes you bring us into are full of brokenness and intimacy: broken toys and pacifier; bad knees and scars; a marriage ending; bathing your mother after surgery. Certainly, these are also images of survival. What has gone into your decision-making about the level of honesty and openness in your poems?

A: When it comes to writing poems, I don't know any other way to be but honest. The real work comes from deciding which poems to publish.

I tell my students all the time that they can and should write whatever they want to write, but it's up to them whether to make the poems public. The poems in Misery Islands certainly put that theory to the test as I was writing about the breakup of my marriage. Ultimately, I would not publish anything I felt was embarrassing to my friends and family. I wrote honestly about the hurt I felt when I realized the plan for my life was changing.

My children are young, and I know I'll have some explaining to do about the subject matter in this book. But I want to show my kids that life goes on, that you can make it through difficult times make it through a little stronger.

Q: How would you characterize your relationship with your reader?

A: I am my first, best reader. I write for me, and I am pleased when readers connect with my work. But at 4 A.M., when the kids are still asleep and it's just me staring at a blank page, I don't think I could do my best work if I wrote for an audience. Once I have a draft, however, I have a regular group of writer-friends who give me candid feedback. They find the places in my poems that need a little more attention.

Once published, poems take on a life of their own. I'm always surprised by what a reader sees that I miss in the creation process. That's probably the greatest gift for me, when my work touches someone in ways I never expected.

Q: What are your thoughts about vulnerability and writing/art?

A: I think all artists have to come to a place where they are comfortable with letting down their guard. I write poems from the world around me, so they tend to be personal. But I always, always want the craft to come through. For me, I don't see it as being vulnerable. But I do have to get to a place where I am completely open and accurate while being able to bend the language. Call it "flow" or being in "the zone," it's about capturing the moment, and then finding the right words to make that moment sing.

What the Body Knows

The body knows it is part of a whole, its parts believed to be
in good working order. It knows it's getting older, years
ticking off like pages on a desk calendar, your doctor's
appointment circled in red. Try not to picture the body
sitting alone in the waiting room. The body creaks up and
down like a hardwood floor, you tell your doctor this;
he says your breast is a snow globe. He says, Inside there's
a snowstorm--my job is to decipher a bear from a moose
in the snow. He flattens the breast with a low radiation
sandwich press. The body wonders if its parts will turn into
Brie cheese, if its fingers will fuse and become asparagus
stalks. He says it's possible, but don't give it a second
thought. He says insulate your body with spinach. He says
true understanding of the body will enable it to live long
and live well. But the body knows when its leg is being pulled.
The body is a container of incidental materials. If it listens
carefully, it can hear its own voice making the wrong sound.

Home Depot makes me weep.
I travel down aisles like a tourist
in the kingdom of tools
as I look for an extension cord,
a rake, lawn bags--
things you took with you
when you left for good.
I push the metal cart,
quiet as a carriage,
along the hardest of cement floors,
so unforgiving it makes my back ache.
Look at all that needs replacing:
wrenches, screws, a drill.
I reach for caulk to rim the bathtub,
a fluorescent light to replace
the burned-out halo
that flickers above my head
as I move about the kitchen.
There is no permanence
in these objects,
but a sort of emptiness
from what remains.
How unfair
to be in this big-box store
with its sky-high shelves,
and rows and rows of normal. 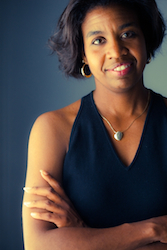 January Gill O'Neil is the author of Misery Islands (fall 2014) and Underlife (2009), both published by CavanKerry Press. She is the executive director of the Massachusetts Poetry Festival and an assistant professor of English at Salem State University.

January's poems and articles have appeared or are forthcoming in New England Review, Ploughshares, Crab Creek Review, and Drunken Boat, among others. A Cave Canem fellow, she runs a popular blog called Poet Mom , and will be reading at the Dodge Poetry Festival this year.

January earned her BA from Old Dominion University and her MFA at New York University. She lives with her two children in Beverly, Massachusetts.