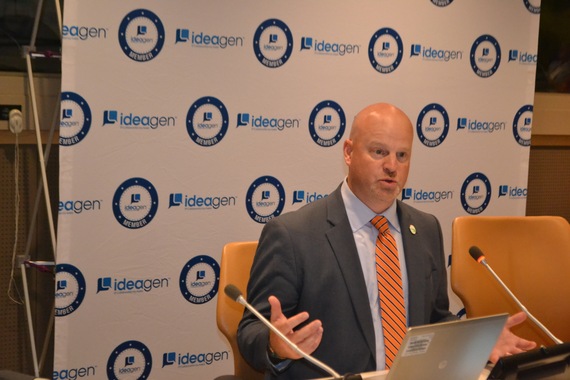 George Sifakis: Jeff, how do you believe the cross-sector collaboration can help solve many of the world's most vexing issues, such as childhood hunger?

Jeff Terry: George, this is such an important question, such an important topic. I think it's fair to say that anybody that is looking at addressing a community based issue, whether it's in a local community on a national basis, regionally or globally, that the days of taking these things on by yourself and being a solution provider solely by yourself are gone. It will only take us so far.

We can't just solve problems on our own anymore. We've seen cycles of public private partnerships over the last 30 years and their effectiveness in different levels. I think the day and age of true cross-sectoral work is really critical. One of the most important challenges with it is having that very open objective trust building conversation early in relationships to say, "Guys here's what we're trying to accomplish, let's figure out how we can accomplish together."

Jeff Terry: Through this work is ... George, the only way that we're really going to be able to address kind of macro issues like childhood hunger and malnutrition. Even at the micro level at the community based level that can't be done by one, it needs to be done by many.

George Sifakis: That's right and we absolutely agree with that. In fact, at the annual Ideagen European Union Delegations of U.N. Leadership 2030 Summit, you were able to join us and we were thrilled to hear an in-depth look at the recently released AGER, Amway Global Entrepreneurship Report. Jeff, could you provide us with a summary of the key themes from this report?

Jeff Terry: Absolutely. George, thanks, that's we've been talking here a little bit about kind of our work to address childhood malnutrition, but to its core Amway is about enabling entrepreneurism all over the world. Not just on, again a macro scale but at a very individual level. For seven years now, we've been conducting a research initiative and developing what we call the Amway Global Entrepreneurship Report and it's intent is to take the temperature and understand into the appetite for individuals wanting to start businesses for themselves. We do this in more than 40 countries around the world. This past year we've talked over 60 thousand individuals globally.

I think trends that we see or traits that we see in individuals that ultimately take that step in becoming entrepreneurs are those that are curious, upbeat, and really wanting to be in charge of their lives. Eighty five percent of individuals basically who are entrepreneurs believe that they live their life to learn.

Their learning potential, their interest in learning is something that is of great ongoing interest to them. That is correlated with taking that spark and turning that into a business opportunity for themselves.

Independence and ideas are really valued above all. This is a theme that we saw come out of this this year. Wanting to really be your own boss, almost 50 percent of individuals that ultimately are considering about starting a business for themselves are really about that. The interesting thing, George, about this is that this is data from many countries and we break this data down at the country level.

The one big thing that I am was very excited to share at the Annual Ideagen EU Leadership 2030 Summit is this new element of the Amway Global Entrepreneurship Report, and that is the Amway Entrepreneurial Spirit Index. It measures attitude and it measures potential and we've done this across all of these companies.

What we've seen is the average for all countries is about 51, which calculated is the mean of three areas; measuring desirability, feasibility, and stability against social pressure. What I mean by that, is 55 percent of the individuals that we talk to on average express the desire to become an entrepreneur, 47 percent felt prepared for entrepreneurship, and 49 percent would not allow the social networks, their social networks, to dissuade them from doing this.

I'm going to be talking a lot more about the Amway Entrepreneurial Spirit Index because this about attitudinally understanding that which is driving people from thinking about doing something to actually doing something in starting a business for themselves. We've broken this down by gender, we break it down by age group.

We launched this report late last year during entrepreneurism week, so I was very excited to share, get into a little bit of more detail on this data, the findings with the world's leading organizations at Ideagen.

For more information on Amway and Ideagen, visit: