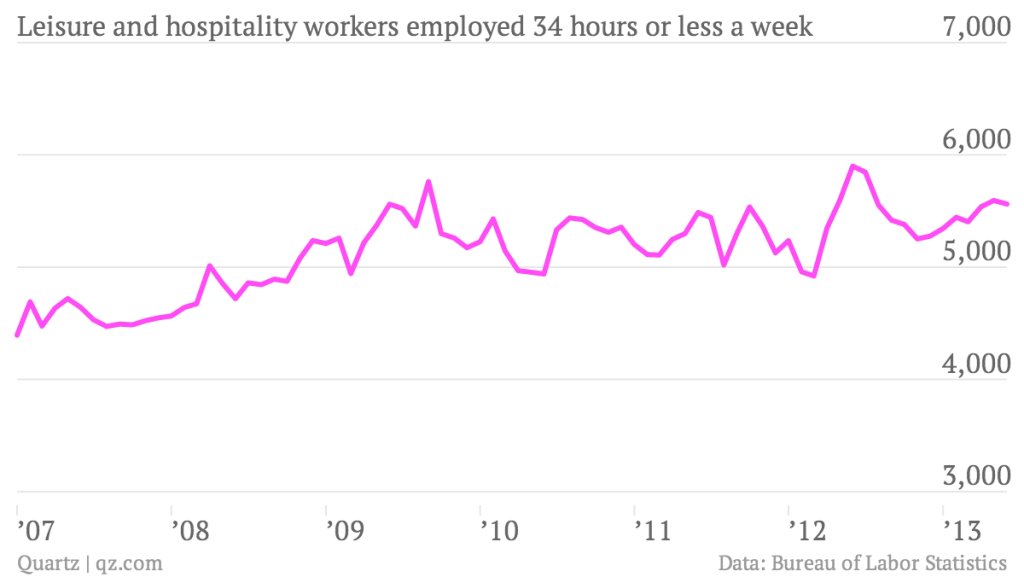 The 2010 US health care overhaul will eventually make it necessary for companies with more than fifty full-time employees to offer them affordable health insurance, or face financial penalties. Challenges of implementing that rule led the Obama administration to punt on enforcing it for a year, until 2015. But some businesses are still saying they will find ways to reduce their full-time workforce to avoid the requirement, with restaurants and fast-food franchises like Subway and Del Taco in particular promising that the health care law means worse jobs.

More From Quartz:
-- Brazil Nuts Aren’t Brazilian, Our Tea Isn’t From China, And All The Hummus Is Made In Virginia
-- Morgan Stanley Is Having An Identity Crisis
-- Spain's Underground Economy Employs A Million People And Is Worth 20 Percent Of Its GDP

But the data say otherwise. Above, you’ll see a chart showing the number of part-time restaurant workers in the United States; it spiked during the recession and has hovered at a higher rate ever since, but remains below its 2012 peak; this matches the broader trend of part-time work in general. The average work week for bar and restaurant staff has in fact increased this year, to 25.6 hours, slightly higher than in the last five. As employment recovers, economists typically expect part-time workers to be hired before full-time workers as businesses test the strength of the economy.

In that sense, the heightened number of part-time workers since the onset of the financial crisis reflects both the weak recovery and its potential improvement. Yes, some existing businesses are willing to restructure their workforces to avoid providing affordable insurance to their employees, but so far these reports are largely anecdotal.

Obamacare aside, the greater impact on restaurant workers is likely to be restaurant expansions. Forecasts predict that the number of quick-service restaurant franchises will increase by 2,600 units and 66,000 workers, while 361 new full-service franchise restaurants will be opened.