The U.S. economy has created more than four times as many part-time jobs as full-time jobs this year, and a new government report shows why that's such a problem.

The report, released by the Bureau of Labor Statistics on Wednesday, says that part-time workers are much less likely than their full-time colleagues to have access to employer-provided health care benefits, retirement savings plans and paid sick days.

The striking discrepancy in benefits is charted out below: 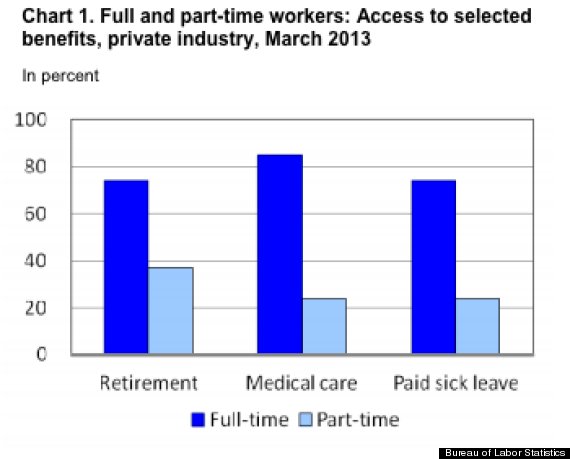 Recessions and recoveries often lead to a boost in part-time hiring. And this most recent recovery has been especially slow to add full-time jobs, forcing millions of American workers into part-time work they don't want.

Corporate executives have said that with the economy so weak, they're hesitant to invest in full-time employees. But the slow recovery hasn’t stopped corporate profits from soaring and firms from squeezing more out of their employees than ever.

Obamacare-detractors claim the part-time jobs recovery is the result of employers reacting to President Obama’s health care reform law, which requires large companies to provide health care coverage for full-time workers. But that theory doesn't take into account that the part-time recovery began before the law's particulars came to light.