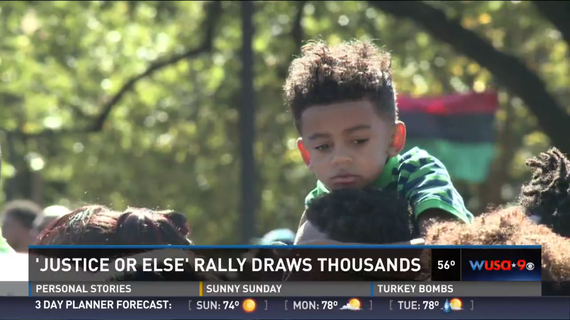 October 10, 2015 was not only historic, it was epic! Twenty years ago, the first Million Man March took place, and even though I was a child, I remember hearing many great and phenomenal stories about the overall experience. Well, we can say that it happened again, possibly now for an even greater cause, Justice or Else. With everything that has taken place, and all of the crazy stories in the news with police brutality and police shootings, this march was important more now than ever. To have so many generations in attendance, both young and old come together to fight for the justice of African-Americans is phenomenal. I know that my four year old may not remember attending the Million Man March once he gets older, or even know what the march was in reference to, but without a doubt, I know that this is something that he will appreciate once he is mature enough to understand.

I was elated to learn that my son Bron made the local news on WUSA channel 9 in the DC, Maryland, and Northern Virginia area. A special thanks goes out to the station for being able to capture the perfect glimpse of what my little one experienced while in attendance at the march. 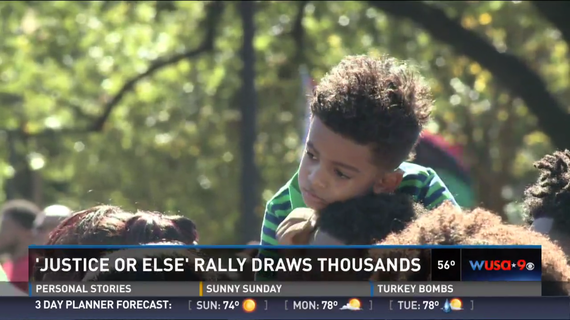 Here are 5 things that my little King Bron will appreciate about attending the march when he gets older:

1) Being in attendance at an historic event. He was able to witness and experience history, not through social media or television, but by being there. At this age, children are like a sponge, and they are able to absorb so much knowledge, and soak up information. The fact that he could experience this makes me happy. He may not have been able to understand all, if any of what was being said, but there are definitely some things that I'm sure he soaked up, that will follow him for life, because there are power in our words and what we allow to have impact over our lives.

2) The news station coverage is everything. Not only, can he say that he was there, but he now has video coverage to watch. How cool is that? To be at an event such as the Million Man March, as a four-year-old little boy, with not a care in the world, and to have the perfect moment captured as he sat on his daddy's shoulders is something special.

3) To make history, which is now HIS story that he can share once he gets older. With all that has been going on, and to be able to stand with thousands, leaders and celebrities included, is monumental within itself.

4) Leading by example. Having leadership values instilled in him as a child, and being shown that sometimes it takes more than just talking about something, rather that it takes action, unity, and coming together in uniting for a common cause.

5) Being trained in the way that he should go. This speaks for itself because it is important for our children, no matter their ethnicity, but especially for African-American children to be educated even at an early age of the happenings in the world. It's never too early for children to learn and to be taught their worth and value as a human being.

How are you participating in history? What is it that you want your kids to know about their time growing up that they can take an active role in?