Twenty-nine states plus DC offer persons the option of declaring a party affiliation when they register to vote. Party registration totals thus provide a snapshot of the overall partisan balance within a state. Comparisons of these statistics over time provide a broader picture of overall trends.

Keep in mind that while surveys show party self-identification is a strong predictor of a person's voting patterns, a person is free to vote for any general election candidate. Party registration is not exactly party self-identification, either. It is more sticky in that registrants need to fill out a form to change their party registration, while survey respondents are free to articulate their party preference of the moment to an interviewer. Typically, party registration is used as a qualification for voting in party primaries. A Republican living in a heavily Democratic area might register as a Democrat in order to cast a meaningful vote in a Democratic primary. Particularly in Southern states, where a long-term realignment towards the Republican Party has been occurring, a person may register as a Democrat to vote in state and local Democratic primaries but vote for Republican candidates in general elections.

One further aspect of voter registration is important to understand is the difference between active an inactive voters. Election administrators are constantly challenged to keep the voter registration rolls accurate. New registrations are constantly pouring in. If a voter who recently moved provides information that identifies their former address, election administrators will attempt to remove or port over the registrant's voter registration record in their former local jurisdiction. This is known as purging. Often people do not notify election officials that they have moved. The National Voter Registration Act of 1993 (a.k.a. Motor Voter) outlines the procedure for election administrators to purge records of registrants who have not voted in recent elections, who filled out a National Change of Address Form with the Post Office, or to whom an official letter sent from their office was returned as undeliverable. Most election officials maintain two lists of registrants: active and inactive. Although the exact procedures vary among localities, inactive voters are generally registrants that election officials believe should be purged, but all of the procedures to do so have not been satisfied. In the tables below, I provide statistics for active voters, where active voter statistics are available in 2008 and 2010.

OK, enough with the important definitions. Let's get to the good stuff! 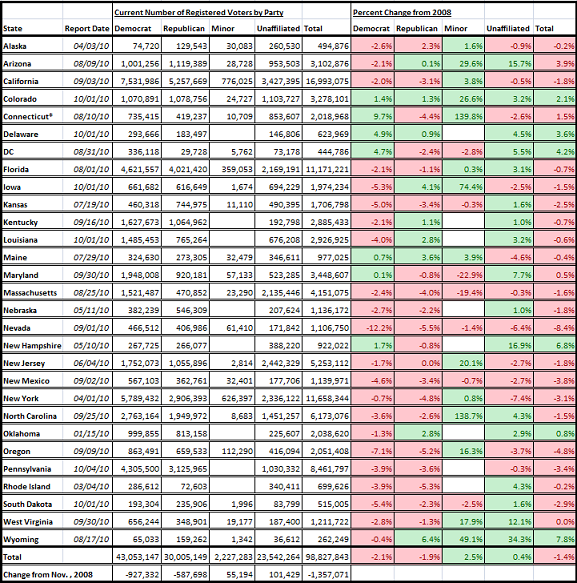 The state-by-state trends reveal uneven patterns of change among the states. Some of these changes appear significant in what they illuminate about hotly-contested races.