California's multi-year drought may be old news by now, but it keeps yielding new surprises, such as nasty cracks appearing overnight in living room walls. As the state thirstily sucks groundwater from underground aquifers, especially to keep its massive agriculture industry operational, the people up above are feeling the ramifications and are beginning to crack -- literally -- under the pressure.

As a local news report from San Francisco noted in late June, California's Central Valley and Merced County specifically, is suffering the most as a huge and longstanding subsidence zone centered around the town of El Nido may now be sinking at a rate of up to one foot per year, wreaking havoc on parking lots, concrete canal walls and most scarily, the foundations of residents' homes.

Subsidence is actually a problem that goes back to earlier drought cycles. Reveal News recently recounted a short history of San Luis Obispo and how it came to cause its own geological downfall. In 1989, the city responded to a severe drought by drilling for water. Within a year, 40 percent of the local water supply was being obtained from an aquifer. The result: the Bear Valley Shopping Center began to buckle and crack, and salesmen at the nearby Sunset Honda dealership had to avoid flying glass as windows shattered under the pressure. (Eventually the building was demolished and replaced.) 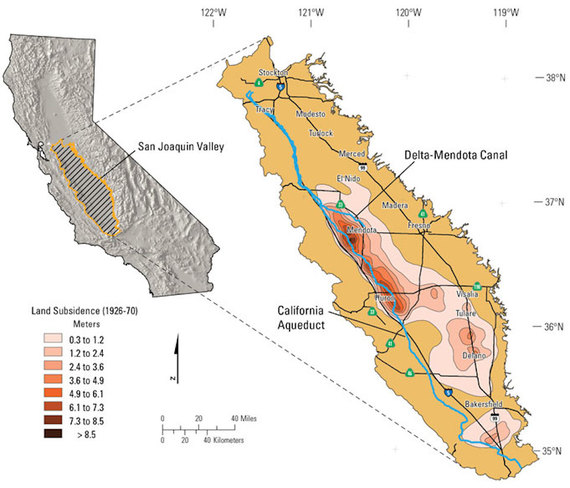 The big question that emerged at the time was legal: who could sue whom for damages? Property owners sued the city and ultimately won $3.5 million in settlements, with the judge ruling that the city should have understood the dangers of droughts and prepared for them years earlier without resorting to desperate drilling measures.

Today, San Luis Obispo has learned its lesson and no longer drills -- but just about everyone else does. California currently gets 60 percent of its water from groundwater sources, and with the legal precedent now in place, it's easy to predict the flurry of lawsuits that will be triggered if the severe subsidence in the Central Valley continues.

And as you might imagine, this story extends far beyond the borders of the Golden State. A worldwide study published in June presented a "groundwater stress assessment" that quantified the relationship between groundwater use and availability in the world's 37 largest aquifer systems, everywhere from China to France. By using NASA satellite data to detect the gravitational pull of underground water, scientists found that 21 of the 37 systems have tipped into the negative zone -- they are losing more water than they can replace -- and 13 of them, including aquifer systems along America's Gulf coast and in the Indus River basin and Saudi Arabia, are in especially dire straits.

UPDATE: A new NASA report just released by California's Department of Water Resources shows land in the state's San Joaquin Valley is sinking faster than ever before -- nearly two inches per month in some locations.