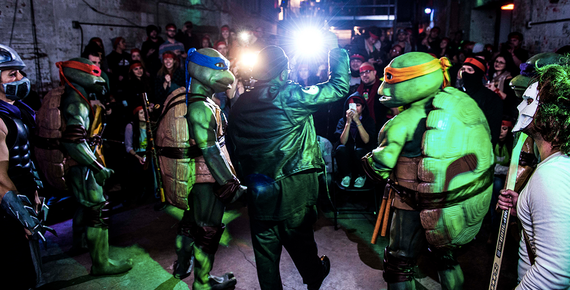 Did you spend your adolescence dreaming you could be part of your favorite movie? Wish you could boogie at the Under the Sea dance in Back to the Future? That you could fight crime with the Teenage Mutant Ninja Turtles? Now, thanks to BBQ Films, a production company that creates immersive cinematic experiences in extraordinary locations, you can. And guests are flocking in hordes to Brooklyn for the chance to experience favorite films.

BBQ Films' movie screenings have all the immersive energy of Sleep No More but for a geekier, eighties and nineties-loving audience of nostalgic film buffs. The interactive movie experiences start with a themed cocktail hour in an environment so elaborate that you'll feel like you stepped right into the screen. Actors impersonating movie characters and interact with guests. There's also live music, party favors and usually even a few surprises to boot. And that's all before the film even begins. During the screen you can expect a raucous crowd and a LOT of fun.

Gabriel Rhoads, along with wife Lauren Lickus founded BBQ Films but while they may be the brains behind the operation, movie selection and details are vetted through an advisory panel of over 150 volunteers. They make it their business to choose nostalgic hits and then go about capturing the film's essence and getting every detail right for the fans.

At a recent event celebrating the 25th anniversary of eighties cult-classic, Weekend at Bernie's, star Terry Kiser even showed up to celebrate! Bikini-clad partygoers danced the night away and were able to pick Kiser's brain about the film. Up next? Three nights to party like it's 1995 with the angst-ridden teens from Empire Records. All three screenings (April 8-10) sold out within a matter of minutes. And with a head-shaving station, button-making booth, appearance from Gwar and an autographed from Rex Manning poster, this event promises to be BBQ's best yet. But if you don't appreciate details like this, BBQ probably isn't for you.

Interactive theater seems to be the wave of the future in the city that never sleeps. And BBQ has plans to take the show on the road later this year with a national tour. So look out, these crazy kids may be coming to your town. After all, why just go to the movies when you can be in one?