Pas de Deux: A succession of passes in a dance performed by two people with perfect balance.

The exhibition of Laddie John Dill and Todd Williamson, at Kevin Barry Fine Art in Santa Monica, can be defined as a "pas de deux" of the two Californian artists; a musical path or a dance on the gallery walls that the two embark on alternating and juxtaposing with great skill. The styles and artistic personalities of the two masters, very different from each other, come together in a "visual sound" that is not a contradiction in terms, but rather a visual objectification of two artistic paths that play and focus on issues dear to both, such as light, motion and "pictorial field" ordered by apparent geometric lines.

The aluminum works by Dill are called "light traps" because the lines from which they are constructed catch the light and then immediately pour it into the viewer's eye in a "catch and release" that is almost a real and organic movement. The plot of the forms accentuates the effect of capturing light from any environmental source, emphasizing the sense of movement when the viewer steps in front of it or experiences the change of light intensities at different times of the day.

The eye is mesmerized by the overlap of sinuous, fluid, extremely sensual lines; by a succession of waves in constant motion which, crossing each other or following each other, refer to sound waves more than ocean waves. The work appears as a visual record of the waves formed by the sound of a tuning fork. The reflection of light to the viewer's gaze then completes the hypnotic effect of the works while, at the same time, creating a three-dimensional visual effect.

Machined aluminum appears no longer as a metal but as a semi-fluid paste continuously flowing, which turns from silver tones in the warmer gold to an iridescence hint of delicate rainbow hues. A world of light and movement in which to get lost; a strong sense of alienation and loss of awareness of the "here and now" in which the viewer voluptuously indulges.

The same sense of alienation is felt in the works of Williamson. Starting from an apparently rigid pictorial field divided by horizontal lines as in a musical score, the eye is immediately lost in an explosion of light strokes that catches the eye and leads it to imaginative horizons. The parallel lines in the background are repeated almost forming a plot that gives order to the composition, but is interrupted sometimes by an overlapping vertical linearity that forms a second plot distorting the plot. 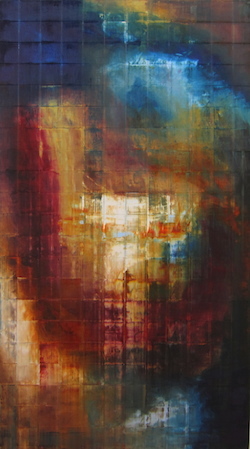 The reference of the works is rather to the strings of musical instruments that vibrate under the sound of a score of music than to a pictorial field. The contours of these lines appear faded, blurred, undefined; the eye is caught by a movement that is rather that of an object or a body that vibrates, making the whole work vibrate. The works of Williamson vibrate like musical notes; the faded and elusive contours, the light that pervades the entire work from the depths of the canvas, the lashing light strokes that invade the composition, give the image of a symphony in the act of creation!

The succession of works of the two masters from one wall to the other accentuates this "musical" effect of their convergence: a "pas de deux" of two artists, performing their dance on a "visual" stage. This creates a visual instead of auditory perception of music; a "visual" interpretation of sound; music created by painting- a musical vision.