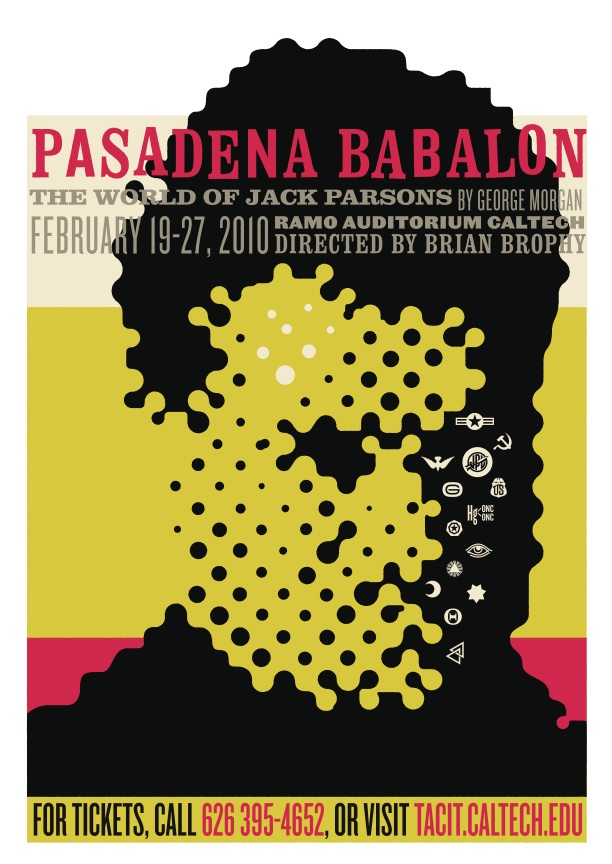 In Pasadena Babalon, Cal Tech students take on the legend of Jack Parsons. And it's a blast.

There's a crater on the dark side of the moon named Parsons, after Jack Parsons, John Whiteside Parsons, a selfmade man, a scientist with no a college degree without whom modern rockets would not exist. Jack Parsons was a brilliant, handsome man who liked to blow things up: He founded Jet Propulsion Labs and Aerojet, outgrowths of his research on solid fuel rockets and jet-assisted-take-off.

But there was another side to this complex Californian: Parsons was a bohemian, an occultist, a follower of Aleister Crowley, and the victim of a swindle at the hands of L. Ron Hubbard long before Hubbard founded Scientology. Parson' strange life in Pasadena is the subject of a play at California Institute of Technology's theatre department where science students stretch their perceptions of reality in grease paint and costumes. In Pasadena Babalon, written by George Morgan under the direction of Brian Brophy, the cast explore Parsons' multi-layered life.

I've known about Parsons for decades, he's one of those weird and wonderful SoCal characters who shaped the region with his eccentricity and dreams. He had two goals: To build a rocket which could go to the moon and to conjure a physical manifestation of Babalon, as the female force was called in Crowley's religion Thelema how would usher in a new age, destroying the old.

And in a way he did did bring about Babalon's destructive force: Parsons and he his pals worked under the tutelage of Theodore va Karman whose work was funded by the military. In Pasadena Babalon, as in real life, a high ranking general hands via Karman a large check and tells the inventor that he doesn't have to reveal the money came from the government

Just tell them it's a grant from the National Academy of Science.

The Cal Tech audience laughed knowingly, sadly at this dig. Parsons' rocketry has taken us to the moon, but his love of pure science-like that of so many-gets used for ends other than it was intended.

Eventually Parson lost everything: Stripped of hs security clearance he ended up working in a local gas station, and in a final twist of magical mayhem, he accidentally blew himself up in his garage just hours before fleeing to Mexico with the women he believed to be his Babalon, Majorie "Candy" Cameron.

NASA named a crater for him, but even more weirdly perfect for Southern California, Parson's magical name "210″ (the numerological form of his secret motto) became the name of the freeway which runs though his hometown of Pasadena and out to the rocket testing grounds he called the Devil's Playground.