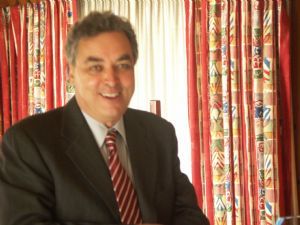 "Thank God for the LA City Council," Little was heard to say at the hearing held by the Pasadena City Council's Economic Development and Technology committee last Thursday.

We overheard this comment after Christine Cooper, an economist with the LA County Economic Development Corporation (LAEDC), made her presentation. Cooper showed a series of slides about Pasadena's economy, including how many low-wage employees work and live in Pasadena, how many work in Pasadena and live elsewhere, and how many live in Pasadena and work outside the city. It could have been a bit confusing, but Paul Little quickly understood what Cooper was trying to say.

Cooper reported that 23 percent of Pasadena's working residents work in Pasadena, but 26 percent of them work in adjacent Los Angeles. That shouldn't be surprising, since Pasadena is a small city with only 105,000 jobs and Los Angeles is a huge city with 1.7 million jobs within its borders. With our pretty-good-and-getting-better public transit system, it's pretty easy for people who live in the City of Roses to get to work in the City of Angels.

Last summer, the LA City Council adopted a law to establish a citywide minimum wage. As a result, LA's minimum wage will be $10.50 an hour starting in January and will increase gradually to $15 an hour by 2020. After that, it will increase annually by the rate of inflation.

That means that many of the roughly15,000 Pasadena residents who work in LA will get a wage hike. All this is thanks to the LA City Council. And those Pasadena residents don't even vote in Los Angeles! Those LA politicians obviously have a heart of gold.

"What a great gift for Pasadena," we heard Paul Little mutter to himself. "All those Pasadena residents will be getting raises, and they'll spend most of it in Pasadena's stores, movie theaters, and restaurants. And each year, as the LA minimum wage grows, Pasadena 's economy will benefit more and more from LA's generosity. Sales tax receipts will grow, too, and so the city government will have more money to spend on parks, playgrounds, fixing potholes, and adding new fire trucks."

In fact, Pasadena residents working in at low-wage jobs in Los Angeles will get a pay increase of $23 million, according to the LA Economic Roundtable, a nonprofit research organization. That, in turn, will generate about $15 million a year in taxable sales in Pasadena businesses.

But that's not all, Little reminded himself.

"Thanks to LA's new minimum wage policy," the Chamber's top executive kept thinking. "thousands of Pasadena residents will be lifted out of poverty. Fewer parents will have to work two or three jobs to make ends meet, so they'll have more time to spend with their kids. And we know from research that the students in PUSD schools - two-thirds of whom come from low-income families - will have fewer obstacles to doing well in school."

"Those Pasadena residents who work in LA and will get significant raises will be going out to eat more often, but they won't be going to our restaurants," Gregg Smith complained. "Even when they start making $15 in 2020, they won't be our customers."

Other restaurant owners (whose hamburgers are in the $5 to $12 range), retailers, and other Chamber of Commerce members in the audience understood that LA's new minimum wage law was a real bonanza for the local economy and their businesses.

"When Pasadena residents have more money in their pockets, they spend most of it in Pasadena," said one of them. "If they work in LA and they're making more money thanks to our neighboring city's new minimum wage law, that's great for us."

But another Pasadena business owner was less enthusiastic about the new LA minimum wage law.
"I worry that if Pasadena doesn't adopt the same law as LA, our local businesses will have a hard time attracting employees. Why would anybody want to work in Pasadena for $9 an hour if they can earn a few bucks more per hour in LA?"

"Workers will turn their backs on better-paying jobs in LA to work here because Pasadena is prettier," he mused. "We have nicer architecture. And you can see the San Gabriel mountains."

That's why Little and the Pasadena Chamber of Commerce decided in September to officially oppose adopting a minimum wage law in Pasadena like the one adopted in Los Angeles. He repeated that sentiment at Thursday's hearing. After all, why should the Pasadena City Council adopt a law to help many of the approximately 14,000 Pasadena residents who work in Pasadena when even more of them (over 15,000) work in Los Angeles?

"What's good for the goose isn't necessarily good for the gander," Little told the Pasadena City Council members. "Pasadena doesn't have to do everything LA does. We have our own way of doing things. We call it the 'Pasadena Way.'"

But Little is no dope. He took Economics 101 in college and he knows what economists mean by "consumer demand."

So he was already salivating at the thought of all those Pasadena residents bringing their increased Los Angeles wages into the City of Roses.

He was even thinking about calling his counterpart, LA Chamber of Commerce president Gary Toebben, to suggest that LA change its name to "City of Raises."

Peter Dreier, a Pasadena resident, is chair of the Urban & Environmental Policy Department at Occidental College and coauthor of Place Matters: Metropolitics for the 21st Century.