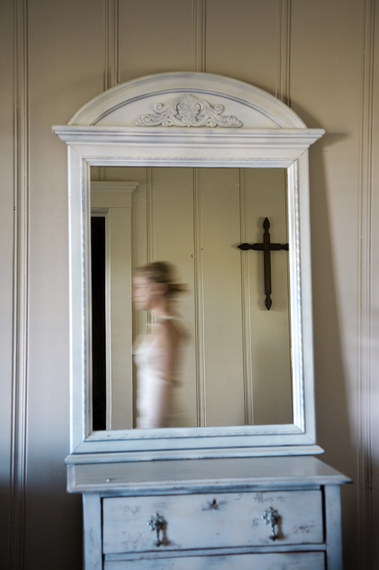 I turn the key to enter my family home one last time. Even now, the waiting silence surprises me.

It is the first and only house my family owned in Canada and it is about to be sold. I stand in the hushed living room. Everything is still intact, until next week when the contents will be moved to make way for the new owners. Within the past two years my mother and father have died. My sisters and brother and I decided it was best to sell: all of us have long had lives and careers in the city an hour away.

I remember the day we moved here from our apartment downtown above a hardware store. I was 12. 1 stood in the backyard greedily surveying the grass, shrubs and the one lone tree, reveling in what was newly mine. My last play area had been a roof atop a hardware store, covered in sharp stones, one of which had embedded itself for all time in my left knee after a tumble.

After emigrating from Scotland, me just a babe in my mother's arms, we lived in a series of small towns, moving wherever my father could find work, and always in rooms owned by others. Like generations of immigrants before them, my parent's dream was to have a home of their own. When the bank called to say the loan had been approved for the down payment ($333, I remember) my father danced my mother around the kitchen with abandon, both of them laughing wildly.

The house was a disaster when we moved in. Linoleum on the kitchen floor had heaved in the middle and water dripped into rusty sinks. Undaunted, we set to work; this was ours, finally. During those first few years of renovation I learned how to use a level, hang a plumb line and install quarter-round. "Let the hammer do the work," my father would admonish, his r's rolling. Repairs and additions were made as we could afford them. The basement was gutted and made livable, wiring and plumbing replaced, a carport and back deck added in the later years when funds were not as tight.

"It's awfully dark in this kitchen," my mother said out of the blue one day while we were all at breakfast. My father nodded - as usual, the two of them were sharing thoughts.

"Not for long," he announced, heading downstairs and returning with a sledgehammer. We spent that weekend covered in sawdust, music blaring, dismantling the wall that had been blocking out so much light.

In the ad selling the house, the real-estate agent described it as "a doll's house." A perfect description. As I wander through the small rooms, it still amazes me that the six of us coexisted here as well as we did. Upstairs I stand in the alcove between the two bedrooms we shared as kids. How many nights did we talk back and forth across the rooms before going to sleep, giggling and joking until the wee hours or until my father's famous reproach from below: "You'll be singing a different tune come morning."

I return downstairs to make a cup of tea. The kitchen was where we always congregated, crowding around the table competing to tell our stories. It was a home that rang with laughter, a second home to many where there was always a "cuppa" waiting. A pot of tea was always on the go. I can still picture our girlfriends at the table bending my mother's sympathetic ear with their latest tales of heartbreak. "'You'll find the man for you even if he's in a bandbox," she'd console. Children on the street all came to know Cathy, or Caffy as most of them called her. "Is Caffy home?" they'd ask in conspiratorial groups at our front door. Many of them still returned to visit her when they had kids of their own.

I walk across to my parents' bedroom: It is this room that will be the hardest to leave. Small and always painted white, it is where my mother spent her final months battling cancer. The bed is where I sat with her, slipping ice chips into her mouth. It is where I washed her, combed her hair and told her stories. It is also where my mother and father played out their daily ritual as she neared the end. While she dozed on and off my father sat at the foot of the bed, pretending to read, alert to her every move. No matter how stealthily he attempted to leave she would stir.

"Where are you going, James?" she would ask in her soft Scottish tones.

"As long as I know you're there," she would say, before succumbing again to her fitful sleep.

The day we were forced to move her to the hospital, I sat on the bed with her watching the ambulance attendants struggle to fit the stretcher through the doorway. Although she knew all too well what the future held, my mother worried instead about inconveniencing the two young men. "What a nuisance for you," she said to them lightly. "This wee house." I don't think I ever loved her more than at that moment.

After her death their bed is where I saw my father sleeping alone for the first time, knowing I could never touch the grief he felt at the loss of his best friend. I open the top drawer of their dresser. Important papers were always kept there: insurance records, birth certificates, bank slips. "Try the top drawer," was the refrain whenever something went missing. Atop a stack of papers sits my father's little navy blue sea book, a partial record of his service as a merchant seaman. (Because of a serious boyhood injury that deformed his arm he was denied entry to the British Navy, in which two of his brothers served.) The entries have all been made with fountain pen, complete with smudges and blobs of flourish, but the details of his many voyages are still legible. I turn the thin, yellowed pages gently, scanning the names of the ships he served on during the war and after: the Empress of Russia, Louis Pasteur, Queen of Bermuda, Sea Robin, Sterling Castle, Eastern Prince, and more.

I was the one who inherited my father's wanderlust and I loved his sea stories, infrequent though they were. It was only after a wee dram that he could be coerced into reminiscing about those years. From snippets here and there I learned he crewed the boat that carried the British contingent of soldiers to the first exchange of prisoners of war with Germany. During six months in Iceland he fuelled ships for their convoys to Murmansk. Once, while his ship was in dry dock in New York he got a job working nights at Macy's and had a girlfriend in Brooklyn. An uncle told me he'd spent six months in a South African jail because he'd stepped in to help one of his shipmates in a brawl onshore.

As a flight attendant years ago I tried to visit some place my father hadn't, but in vain. Returning from a trip to Singapore, I raved on to him about an enchanting old hotel there called Raffles. "Ach, aye, Raffles," he nodded. "Did they ever fix the ceiling fan in the bar downstairs?"

His life had been the sea until he met his Cathy at a dance in Glasgow while home on leave. As she told it, during their first dance together he whispered in her ear, "Can you put me on the straight and narrow, Cathy?" For the next 45 years they remained as one.

My father died suddenly after accidentally falling and striking his head, one year after losing my mom. A week before it happened, he sat across the kitchen table from me and said in his classic straightforward fashion: "Sing no sad songs for me, lassie. I lived the life I wanted." I think of those words now as his final and most precious gift to me.

Standing on the back deck, I listen for the pair of cardinals who visited their feeder nightly for the past several summers. When my mother felt strong enough, she would venture out to the back at dusk and sit alongside my father waiting for their birds, then listen to them call to one another from opposite ends of the yard. My father and mother would say little; the necessary things between them had already been said.

It is time to go. I do another quick check through the rooms, gather up the few things I am taking and close and lock the door behind me. As I drive down the street, out of habit I glance in my rear-view mirror and can almost see my mother, standing at the bottom of the driveway seeing me off.

"Love you, hen," she would call after me in her high sweet Scots burr, waving her arm in a long slow arc until I was out of her sight.

This story is included in Tricia McCallum's first book of poetry: Nothing Gold Can Stay: A Mother and Father Remembered (2011)