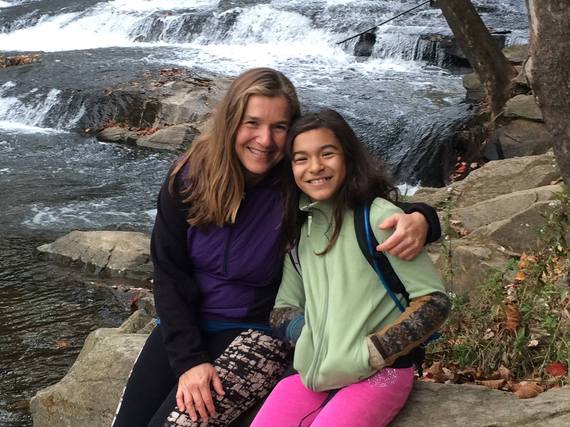 Spring in the Mid-Atlantic region is a glorious season. Here in Washington, D.C. my 11-year old and her friends shed heavy winter coats to enjoy the gorgeous cherry blossoms, run around, and muck about in the dirt. We're planning more outdoor adventures to take advantage of the (mostly) warmer weather - hiking on local trails and exploring the Chesapeake Bay.

Yet the season also brings worries for parents - more blossoms mean allergies, time outdoors means exposure to ticks and mosquitoes, and soon the hot summer days will mean unhealthy air alerts. As parents, we want to do everything we can to keep our kids safe. But a recent assessment on climate change and health warns that our kids' health is more at risk than ever.

Their conclusion: climate change is already threatening our health, and vulnerable populations like children are especially at risk. Without bold action to avoid even more extreme increases in temperature in the future, we will see more and more threats to our kids' health.

As a mom, these findings hit close to home.

Already, my daughter is growing up in a world made less safe by global warming. This time of year, she loves playing outside, climbing trees and racing her friends down the sidewalk. But rising temperatures are increasing the risk of bad air days. She's lucky not to have asthma, but exposure to smog and soot can harm her young lungs. She loves April flowers, but high pollen counts mean lots of sniffles and sneezes in our house. Thanks to climate change, allergy season is longer and more extreme than ever before.

The public health assessment paints a horrifying picture of what life will be like for my child as a young woman if global warming continues unchecked. Insect-borne illness such as Lyme disease will become more common and widespread. With the latest revelations about the mosquito-borne Zika virus, an increase in such diseases could affect her decisions about having children of her own. If she does have kids, they'll be exposed to even more smog and particulate pollution, and be more likely to suffer from acute respiratory illness, missed school days, and hospital visits. And she could find that our favorite swimming areas are no longer safe, as climate change increases risk of water-related illness from toxic algae, bacteria, and contaminated fish.

As an advocate who's devoted my career to clean energy solutions, I've long been worried about the risks my daughter and others in her generation will face if we don't act to slow climate change. At the same time, I've long been astonished by the polluters' insistence and effectiveness in blocking our ability to do so.

A Taylor Swift fan, my tween likes to sing along about the haters, who are gonna hate. That's true in the climate change debate: the entrenched fossil fuel lobby is gonna spend their millions to protect their profits; their allies in government are gonna deny the science of climate change and try to curtail progress.

But more than ever before, I'm confident, as Taylor Swift would say, that we can "shake it off," because no matter how much the polluters and deniers hate, the vast majority of Americans - including faith groups, public health professionals, and businesses small and large - are concerned about climate change, and support the solutions that will mitigate it.

After all, avoiding the nightmare scenario in the public health assessment isn't just about stopping heat-trapping pollution. It's about creating a better world for all of us, powered entirely the wind, sun, and other clean sources that never run out. It's about ending our reliance on the dirty fuels that require removing mountaintops, mining our treasured lands, drilling in our fragile oceans, and polluting our drinking water. It's about transportation choices that give people of all ages the ability to get around safely and efficiently.

I'm also confident because our elected leaders are beginning to act. From leading nearly 200 nations to forge an agreement to keep warming below 2 degrees Celsius, to almost doubling the efficiency of our cars, to adopting carbon pollution limits on power plants, President Barack Obama has already built a powerful climate legacy. And in supporting bold climate solutions, the president is joined by governors, state legislators, and mayors across the country.

We can't save our children from every threat in the world, but there are steps we can take as parents to make it better. And, as the surgeon general said, "If we want to safeguard the health of future generations, we have to address climate change."

The prognosis is clear: climate change presents a real threat to our kids' health today and to the lives they will lead as adults. But we have the remedies - keeping fossil fuels in the ground and switching to 100 percent clean energy. The world my daughter and all children inherit depends on us using them.