I have been engaged in a years-long effort to get the LGBT community -- gay and trans -- to mount a professional campaign to deal with the trans bathroom issue. I was the leader, at significant personal and political cost, of the first community that actually faced -- and defeated -- such a campaign, so I have some standing upon which to discuss this topic.

You may have noted that the grassroots has been mounting such social media campaigns over the past several years. I've written about them and they've had a positive impact. However, being limited to social media, and without the amplification provided by the mainstream media pushed by our national advocacy organizations, the impact of these grassroots heroes is still limited.

I haven't been campaigning alone. I have had trans and gay colleagues raising the question, increasingly more frequently, since it has become clear, in this year of a tsunami of anti-LGBT legislation which is often primarily directed at trans persons and bathroom facilities, that the attacks must be dealt with directly. Yet no organization -- not the LGBT behemoth, the Human Rights Campaign, nor the leading national trans equality organization, the National Center of TransEquality -- has joined in the effort or even the debate. The response has been, as it has with the issue of Title VII protections -- silence.

Finally, the nation's leading LGBT newspaper, the Washington Blade, has published an essay from a Maryland resident which, I believe, goes to the heart of the movement's reticence on this issue. I welcome her engagement. Suzi Chase wrote her article, entitled "Passing Privilege Debate Conjures Stereotypes," using this very cute photo in her lede: 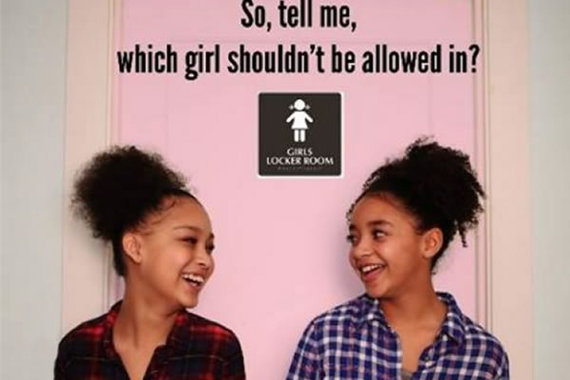 I will put aside the issue of there being an actual debate about passing privilege, because while it's been an issue in the trans community for many decades, it's never really been publicly debated, and we no longer have the luxury of ignoring it. Unfortunately, and this may be one of the reasons the national organizations are hesitant to even broach the subject, it brings back to life old arguments about gay rights strategy, including the addition of the "T" to LGB.

I will state from the start -- I do not believe that in the pursuit of basic human rights that our community should leave anyone behind. We may have to compromise on the expansiveness of legal protections, say not covering public accommodations as well as employment or housing at any given moment in time, as occurred in Massachusetts in 2011, but we should not work to pass anti-discrimination laws that cover only gay persons or only trans persons, for instance. That's why in pushing for educating the LGBT population about our federal legal rights under Title VII since the 2012 Macy decision I have repeatedly said, "No gays left behind." And that finally came about in the Baldwin v. Fox decision of last summer. Similarly I have fought for an inclusive federal ENDA and Equality Act, and full coverage for all trans and gender non-conforming Marylanders in our county and state legislation. I don't privilege any group over another.

However, it is one thing to pass laws that cover everyone, and leave no one behind, and another to be fully inclusive while organizing and strategizing to accomplish those goals. That can be very counterproductive, and even dangerous, threatening members of the trans community who do not deserve to be punished for the sake of political correctness. We are running political campaigns with political actions, not support groups, and we're doing so with an American population that is profoundly ignorant about sex and gender.

Smashing the gender binary is dangerous political provocation in today's climate. Ignoring stereotypes that are ingrained in the American psyche is inviting failure. Demanding that passing privilege shouldn't matter, when it clearly always has, and should have no role in marketing the community to its neighbors, is a mistake.

Changing these stereotypes is important social work. Education is ongoing and will continue, but it will take years, if not decades to change those stereotypes. It is no surprise that the most well-known trans Americans are gender-typical Caitlyn Jenner and Laverne Cox. It will be years before a genderqueer person breaks into that level of fame. And that person will come, but not soon enough, to have a significant enough impact on the legislatures in North Carolina, Georgia or Tennessee.

Back in the '70s and '80s, the gay community was riven by divisions between the assimilationists and the queens. The decisions were made to present to straight America gay persons who resembled them, so as not to stop the nascent movement in its tracks. It was only in the 90s that lesbians came to some degree of power in the movement, and only in this century when the trans community has joined as well.

People today are still angry, even enraged, that the gay communities of the '90s didn't embrace trans persons and push for inclusive legislation. For example, during the late '90s gender identity was stripped from the Maryland anti-discrimination bill. When I argued in Maryland in 2009 that the community should promote the fact that I had recently obtained the state's first same-sex divorce -- three years before marriage equality passed -- I was asked to demur. When I suggested we use trans couples as part of our collage of couples deserving of same-sex marriage, because we would benefit just as well, I was asked to be quiet. "You'll just mess up the presentation and complicate the issue in the minds of the legislators and general population," I was told. Having thought about it from a political, and not a personal perspective, I agreed. The goal was to change the law which would have broad, inclusive consequences, even if we didn't stage-manage the campaign to be all-inclusive.

Putting aside the natural human habit of self-interest, which affects gay people as well as straight, it is unfortunately true that many gay bills would not have passed in the early years had they visibly included gender identity. What was unacceptable was the claim of the gay advocates that they would "come back" for us. They usually did not, and then only when kicking and screaming in too many cases. Today Wisconsin, New Hampshire and New York still don't have inclusive state laws.

Those efforts for gay rights did pave the way for Americans, once they had gotten over their gay "ick" factor, to being to deal with the trans community. The trans "ick" factor still exists, primarily in the Old Confederacy but still nationwide as well, as manifested recently in South Dakota, North Carolina, Georgia and Tennessee, and will take even more time to overcome. As I've said, these bills are a rear-guard action being taken against us because we are winning. But in our victory blindness, as Michaelangelo Signorile calls it, from marriage equality -- which covered all members of the gay and trans community, as I described earlier -- we have not been prepared for the ferocity of the onslaught. Adding genderqueer visibly into the mix, or, more specifically, failing to promote actual trans persons because so doing minimizes the lives of genderqueer persons, is not only short-sighted but potentially very damaging.

To the issue of privilege -- some privileges are good. Some people earn their privilege. Some use it to help others gain their own and subvert unearned privilege. Passing privilege is one of those privileges, and it won't be disappearing anytime soon. We need to use it to our advantage.

As for the stereotypes, Ms. Chase says:

Basing our case for restroom and locker room access on the notion that those who look female belong in female spaces wins us ground, but only at the cost of compounding the pressure trans people already feel to conform to gender expectations imposed by our culture. If we insist that trans men and women resemble our general notion of what men or women ought to look like, we not only reinforce gender stereotypes but also disproportionately oppress those who can't or prefer not to live up to those stereotypes.

The South Dakota victory was not won by presenting impactful images. Instead, the transgender students the law would mistreat were humanized by airing their stories and acquainting decision makers with the realities of their lives. That needs to be our goal in future efforts if we are truly to move toward a world where the entire spectrum of appearances, gender identities, and presentations can live comfortably and safely.

Our goal is, indeed, to "to move toward a world where the entire spectrum of appearances, gender identities, and presentations can live comfortably and safely," but that does not happen overnight. I believe while Governor Daugaard meeting with the families of trans students did help him understand the reality of trans lives, he made his decision because of the intense pressure brought by the South Dakota business community. They're interested in fairness and equality, but they are probably not ready for smashing the gender binary. The "impactful images" that were in his mind were likely similar to those two girls at the top of this column, and the fear of losing federal dollars and future business opportunities played a very important role.

Ms. Chase is correct when she writes that "basing our case for restroom and locker room access on the notion that those who look female belong in female spaces wins us ground," and that is the ground upon which we are fighting today.

The lawsuit filed this week in the 4th Circuit in North Carolina by the ACLU and Lambda Legal makes effective use of the binary gender expression normativity of our society, a long overdue necessity to influence the courts in the federal system that ultimately will protect all of us:

H.B. 2 discriminates against transgender people based on gender nonconformity. For example, although Mr. Carcaño and Mr. McGarry are men, are perceived as men in public, and have had medical treatment to bring their body into alignment with their male gender identity, they have birth certificates with female gender markers that do not conform to H.B. 2's expectations for men. Furthermore, if transgender men such as Mr. Carcaño and Mr. McGarry had been assigned male at birth they would not be banned by H.B. 2 from the restrooms and other single-sex facilities consistent with their gender identity. No person has any control over the sex that person is assigned at birth. [Case 1:16-cv-00236 Document 1 Filed 03/28/16 Page 34 of 45]

Today's victories will prepare the ground for progress if we do the education in the years to come to truly expand gender, but that is not today's battle, and we cannot surrender our most potent tools in these campaigns for the sake of the ultimate perfect victory. The perfect is the enemy of the good, revolution rarely happens and when it does it comes with far more bloodshed than anticipated, and utopia is not around the corner. The effort requires commitment and perseverance, and the smart use of available tools to win in the world in which we live today, not the world as we wish it were. We must dream, but we must also be prudent by controlling our feelings to help create the foundation upon which those dreams can be fulfilled.