Recently, I was on a panel at an event geared toward sponsorship in the music and marketing space, hosted by a company called 1Band 1Brand, which exists primarily to connect the two industries. With so many companies looking to harness the power of music to reach their audiences, and so many artists looking for ways to bolster their income in a world of free music, it was a lively discussion about effective promotion, quality content and navigating the business. Of particular note, when it came to questions from the crowd that was full of young artists, basically the same thought surfaced on repeat: "How do we get companies to sponsor us?" and variations on a similar theme.

In an environment where album sales alone won't sustain as a way to make a living, it seems the new success means not only that a label will sign and appreciate your talents, but often necessitates participation from companies that will pay for private shows or special joint projects. Passion Pit is a group that has made this happen all over the place in ways that work for them: During South by Southwest 2015, they played a Dell sponsored party at Fader Fort and last week, they were back in Austin for the Mercedes-Benz Evolution Tour. These partnerships involved both concerts and the freedom to create net-new material with a digital presence. If at one time the idea of corporate collaboration were an unsavory prospect, this is fortunately no longer the case, according to lead singer Michael Angelakos. I had the chance to catch up with him last week for some honest thoughts, which reflect that the perspective in general has largely shifted towards acceptance, appreciation and even enjoyment of these types of opportunities that allow them to keep creating on their own terms. 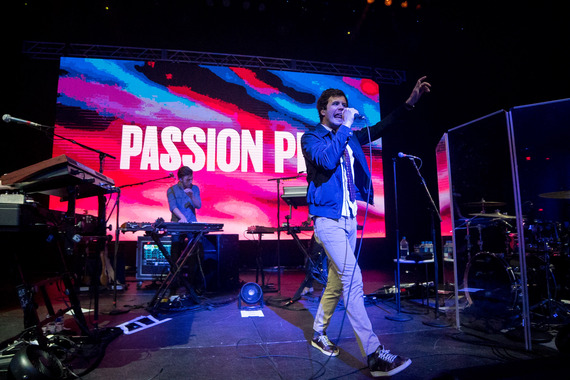 
So many young artists these days are having to get creative with the way they make a living in the music industry, particularly with business moves beyond record sales and touring. Can you tell us a bit about your experience with playing for private corporate parties? How did you get started playing them?

Well, I think it's important to not rule out that older artists are not exempt here. The playing field has now just been leveled because younger artists with higher profiles are doing them quite regularly -- far higher profiles than Passion Pit. I think when I was coming up, like around 2007, corporate alignment were still frowned upon because people still believed the music industry was functioning healthily and didn't need corporations. Then the indie world stopped making money on anything other than touring, really, and started seeing offers from all of these otherwise random corporations that would offer not just great money but benefits like social media exposure, promotion, etc. At the end of the day, artists need to live. Corporations don't prey on this, but they know that they can work with artists, and there is definitely a mutual benefit. We would play private corporate stuff because it helped pay for production and allowed us to keep our ticket prices down. We don't say yes to everything, we've been offered quite a bit, which is really great. We're still playing shows as Passion Pit, and I'm not asked to be anyone but myself.

Was it a hard decision for you to say yes to playing for these kinds of private shows or were you open to the idea from the start? Does anyone give you a hard time about it?
Photo: Mercedes-Benz

It was hard at first but only because I was uneducated in where the industry was going and how simple it really is. It's an archaic model that's making it seem or feel "dirty." If you sign into a silly, compromising deal, that's ultimately your decision but no one is saying you have to, usually. And I remember a few people giving me a hard time about Taco Bell, but then ultimately just dropping it because EVERYONE is part of that Feed the Beat program. It's actually a cool program for young bands. So, look, it's a reality and it's helped me do what I want to do more freely because that's the nature of it all. The money's not where it used to be and it's an expensive industry. And by the way the people behind these programs are usually pretty cool and they get it. They don't want unhappy artists repping. I think Fader has been the greatest at integrating corporate alignment and art over the years, so they're a great example of a company that knows how to do it as well as possible.

Which sponsored show and/or brand collaboration has been the most fun for you? Were there any where you felt like it, or the audience, was really a stretch?

Some are totally a stretch, sure. But that's kind of fun, now that I think about it -- we work a little harder and try to get people into it. Usually by the end people are having fun as it's often the environment that can be a little off. You have to push through it. In terms of fun, to the point of us having to work a little harder, these shows are like any other show where it's completely up to the performer to make it a great show. It's still your show. You get on stage and you completely ignore whatever it is that's being pushed and you do what you were ultimately asked to do. I often don't even notice it's this particular type of gig and just play through it like anything else. Then you have the rather rare experience of working with a company that wants to create a creative platform for you, like the Mercedes-Benz Evolution tour. They allow me to make something new, like a reimagined version of a song, and then help me release it and be creatively satiated. And the tour is in great cities, great venues. Artistically, you can get pretty lucky with these situations. 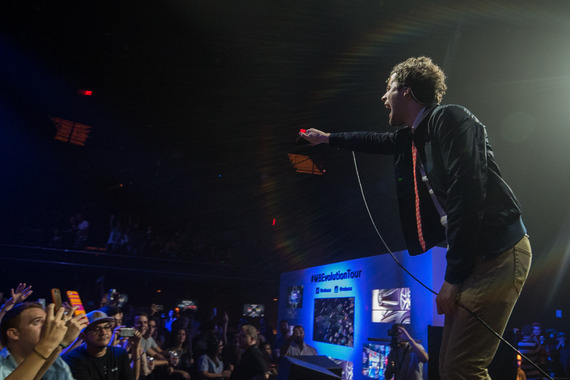