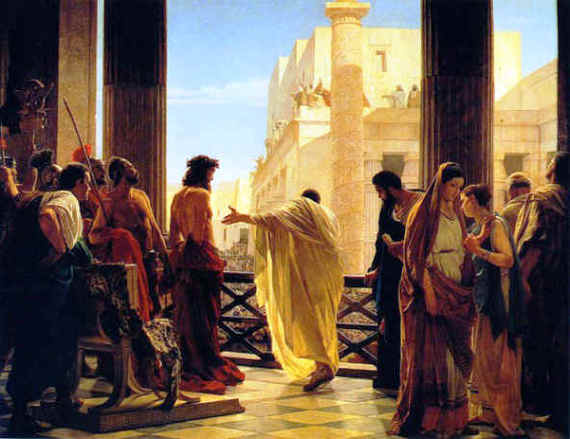 "Crucify him, crucify him!" shouted the multitude of Jews when Pontius Pilate asked them what he should do with Jesus.

Given this horrible history, it's no surprise that for centuries Easter posed great danger for Jews. Good Friday church services have traditionally included passion plays that reenact the trial and crucifixion of Jesus. Already inflamed by the suffering of Jesus on the Cross depicted in these plays, mobs would storm out of Easter services seeking revenge against the "Christ Killers." No wonder that from the Middle Ages through the twentieth century European Jews would go into hiding on Good Friday and Holy Week.

But times have changed. At the Second Vatican Council in 1965 the Catholic church absolved Jews for the death of Jesus. In 2011 Pope Benedict XVI forcefully reaffirmed that doctrine, stating that the Jewish people were not responsible for the death of Jesus. But have individual churches and other venues responded to the repudiation of the "Christ Killers" charge?

I wondered when right after Easter I received a communication from my friend and colleague Paul Kleyman, who is Director of Ethnic Elders Newsbeat for New America Media. Paul's focus on elder issues for minority groups makes him particularly sensitive to stereotyping and prejudice. That surely influenced his shocked reaction at a musical performance in San Francisco:

"I recently attended a performance by a local choral group of the Heinrich Schütz St. John Passion. I think I'd heard it once before, but never with the full English translation of the text. Have you ever written about this appallingly anti-Semitic work? 'Crucify him! Crucify him!' shout the Jews to a the evidently deferential Pilate who acquiesces to the demand of the Jewish mob. Schütz, of course, wrote centuries ago, but are those reverently directing and performing it today getting any pushback?"

While there was no sign of even a disclaimer from this particular choral group, Paul noted that a friend of his looked up the passage in the missal of another Catholic church and did find a notice at least clarifying that Jesus and Mary were Jews themselves, a point, he said, too often lost on modern Christians.

Heinrich Schütz, (1585-1672) as well as Johann Sebastian Bach (1685-1750) composed some of the most popular "Passions," which are traditionally performed at Easter all over the world. Like passion plays the choral oratorios retell the stories of the Gospels, with emphasis on the crucifixion. Some oratorios have thunderous choruses of Jews demanding "crucify him, crucify him."

In response to critical outrage, many modern versions of "Passion" performances have removed or revised objectionable passages. In 1995 several members of the Swarthmore College choir refused to perform Bach's St. John Passion (Johannes-Passion) because of anti-Semitism in the text. In the 1980's at a festival in Boston the first violinist refused to play the same work, also citing the anti-Semitism in the libretto. He agreed to play it only after he was granted permission to write a program note. In contrast to these objections, in 2012 parishioners in Berlin's Cathedral "threatened to leave their church should it allow an Easter performance of Johann Sebastian Bach's St John Passion with a revised script. The libretto had been altered by three Jewish consultants to make it less Judeophobic."

One of the most popular passion plays, the Oberammergau, has been performed since 1634 in the village of Oberammergau, Bavaria. The elaborate production, which features much more than the trial and passion reenactments, runs over five hours. It includes text, music, choral passages, and tableaux vivant representations of Old and New Testament scenes. The play is performed every ten years for a period of five months. The original script has been criticized for rampant anti-Semitism. A 1980 revision toned down some of the anti-Jewish passages but the accusation that the Jews killed Jesus remained. The American Jewish Committee expressed concern that more than two million people had seen the Oberammergau Passion Play since the end of World War II. The 2010 version made more radical changes. It eliminated the most toxic anti-Semitic passages and presented Jesus as a dedicated Jew. In one scene Jesus holds a Torah scroll and recites the Shema, one of the most sacred Jewish prayers.

If anti-Semitic passages are still included in performances in cities like San Francisco, which has a sizable Jewish population, it's likely they are still featured in passion plays and musical productions that are performed throughout the United States and in Europe, where there are reports of rising anti-Semitism.

Other productions with accusations that the Jews killed Jesus, like the one Paul Kleyman attended, seek to counter anti-Semitic content with asterisks and footnotes stating that "we don't subscribe to that anymore." Is that sufficient or is it gratuitous? Imagine the reaction if there were performances with hate-spewing dialogue and stereotypes of African Americans, Hispanics, and other minorities with footnote disclaimers, "we don't do that anymore." The public outcry would be deafening

Wouldn't it be more appropriate if the virulent anti-Semitic passages in passion plays and musical performances were revised or deleted, with footnotes added to explain why pernicious passages were expunged? This action is long overdue and badly needed. But--and this is the crucial point--not because the original contents are politically incorrect but because they are false. It's simply not possible that a multitude of Jews called out "crucify him" or that the Jews killed Jesus. Here's why:

• All of Jesus' followers were dedicated Jews. That includes the Jewish "multitudes" who attended his sermons--Jews who came from "Judea, Galilee, Syria, and beyond Jordan" (Matthew 4:24-25). If not for his Jewish followers there would be no Christianity. If not for his Jewish followers the world would never have heard of Jesus. This fact alone should have been sufficient to squash the absurd charge of "Christ Killers."

• The Gospels tell us that the Sanhedrin had many opportunities to seize Jesus: at his outdoor sermons and his regular appearances at the Temple in Jerusalem (Matthew 26:55). Remember, Jesus was number one on the Sanhedrin's most wanted list and they were tracking his activities. But they chose to grab him in a setting where he would be alone with his disciples. Why? The Gospel of Matthew explains that capturing him surrounded by multitudes of his dedicated followers would cause a riot--his followers would rise up to defend him (Matthew 26:3-5). What? Jews possibly sacrificing their lives to protect their beloved rabbi? And the Jews killed Jesus?

• As reported in the Gospels, the seizure of Jesus in Gethsemane Garden under the cover of darkness was a clandestine operation. That's why Judas was presumably paid thirty pieces of silver to reveal where Jesus would be that night. Thus, none other than the Sanhedrin and the arresting party knew that Jesus was in custody. After appearing before Caiaphas and the Sanhedrin, he was delivered early the next morning to Pontius Pilate for questioning. Still, none other than the captors and the disciples, who went into hiding, knew of the arrest. But miraculously Pontus Pilate suddenly addresses a multitude of Jews who shout "crucify him, crucify him." Who are they, where did they come from, and how did they know that Jesus was a prisoner? The ancient Greeks called such events in plays deus ex machina-- inventions that make no sense but enhance the desired drama. Similarly, the multitudes of Jews calling for the death of Jesus makes no sense; in the tradition of deus ex machina they are materialized out of thin air. Consider biblical scholar Candida Moss's comment that "flash mobs of thousands of people do not miraculously assemble and offer complicated answers in unison without the assistance of smart phones." Pope Benedict XVI agreed: "How could the whole people have been present at that moment to clamor for Jesus' death?"

• The clandestine trial of Jesus took place on Passover, the holiest day on the Jewish calendar at that time. Jews not only didn't know about Jesus' trial, they were preoccupied with intense preparations for Passover. Furthermore, thousands of Roman soldiers were on duty to prevent protest and violence. The hundreds of thousands of Jews who came to Jerusalem each year for Passover frequently generated violent protests against the Roman presence and occupation. At some Passover celebrations thousands of Jews and scores of Roman soldiers were killed in uprisings. That's why the Roman military was out in force and would surely not allow crowds-- particularly angry emotionally aroused crowds--to move across Jerusalem to Pontius Pilate's Palace.

• In preparation for Passover Jews had to perform cleansing and purification rituals. To appear at Pontius Pilate's palace during Passover would have been an unclean act requiring seven days of purification. It would have excluded them from the celebration of this most important holiday. Punctuating that point, the members of the Sanhedrin who delivered Jesus to Pontius Pilate's palace refused to enter because it was unclean and would have required the seven day purification ritual: "Then they led Jesus from Caiaphas into the Praetorium [Pilate's palace], and it was early; and they themselves did not enter into the Praetorium so that they would not be defiled, but might eat the Passover" (John 18:28).

This analysis supports the views of many scholars who contend that Jews were demonized in the Gospels to please the growing number of Roman pagan converts to Christianity. After the Roman defeat of the Jews and the destruction of the Jerusalem Temple in 70 CE Jews were seen as enemies of Rome. So why make them the good guys when with a few strokes of the pen and the magic trick of deus ex machina you can cast them as the villains and the "gentle caring" Roman Governor Pontius Pilate the good guy (Pilate was eventually recalled by the emperor Tiberius for excessive cruelty)?

We can't change history, but we can correct it. "Crucify him, crucify him" and the charge of "Christ Killers" should have no place in any celebration.