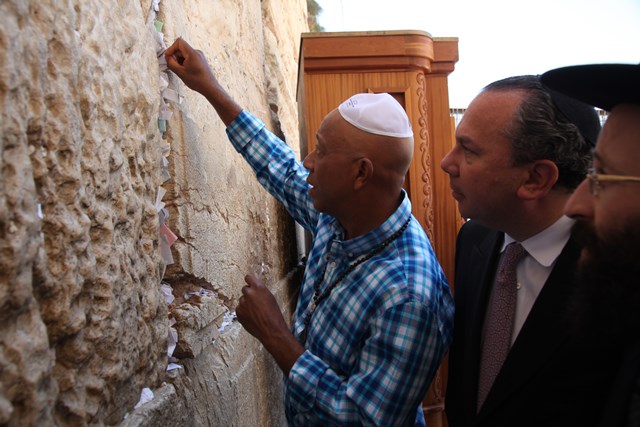 Russell Simmons visits the Western Wall for the first time with Rabbi Marc Schneier when the two were in Israel in June 2012 to deliver Keynotes at the Israeli Presidential Conference. Photo Credit: Sasson Tiram

At the Passover Seder, when we recall the Ten Plagues that God visited upon the ancient Egyptians, it is important to remember that not all of the plagues manifested themselves in the form of physical afflictions. Rabbinic sages explain that the ninth plague -- the plague of Darkness -- did not represent an actual darkening of the sky, but rather a darkness of the heart, a communal blindness, a plague which has afflicted human societies from time immemorial.

Exodus 10:23 states, "They saw not one another" -- meaning the ancient Egyptians were blind to each other's needs, and that their gross insensitivity and inhumanity in relation to the suffering of the Hebrew slaves living among them ultimately led to the breakdown of Egyptian society. This biblical narrative of Passover has long inspired men and women of all faiths and nationalities to recognize the inherent justice of the struggles of oppressed people of other backgrounds, and to make those struggles their own.

Dr. Martin Luther King, Jr., who was assassinated nearly 45 years ago, on April 4, 1968, championed this ideal in his rhetoric and actions. Dr. King understood that those who fight for their own rights are most honorable when they fight for the rights of all people. While Dr. King's primary focus was certainly on the freedom struggle of his own African American community, he championed the needs of people of all faiths and backgrounds, including those of the Jewish community. King felt an abiding kinship with the Jewish people and found a special symbolism in Jewish history -- especially in the Passover Exodus narrative of the ancient Hebrews from slavery in Egypt -- which he understood to have deep parallels to the African-American struggle for liberation. American Jews strongly reciprocated the sentiment; there was no segment of American society which provided more consistent support to the black community as did the Jewish community.

The ancient Egyptians failed God's test. They were unable to grasp that being fully human means the capacity to feel and display empathy toward people of diverse backgrounds, faiths and ethnicities; people with who we may strongly disagree. In our modern era, the open question remains: How will we, as an ever-more diverse and often fractious nation, avoid the fate of the ancient Egyptians, and instead succeed in responding to the challenge of the ninth plague? If we hope to realize the dreams and ideals of democracy, if we hope to forge a more perfect union, we will have to learn to be more responsive to the needs and concerns of others across racial, ethnic and religious lines. The changing face of the world demands that we make each others' oppression our very own oppression.

Since 2007, the two of us, a Jew and an African-American, have been working through the Foundation for Ethnic Understanding (FFEU) to build ties of communication, reconciliation and cooperation between Jews and Muslims in the United States and around the world. We have undertaken this challenge as a logical extension of the work we have been doing for over 20 years in strengthening black-Jewish relations. The African-American community plays a large part in our Jewish-Muslim work since a considerable percentage of African-Americans today are Muslim.

If we as a society wish to avoid the devastating consequences of the ninth plague, we must say a collective "no" to the shameful campaign to stigmatize and scapegoat Muslim-Americans. By taking this unequivocal stand, we re-affirm the historic lesson of the Passover season: that each and every person is a child of God regardless of background and is entitled to be treated with dignity and respect. Certainly, the Jewish and African-American communities which have stood by each other for decades in good times and bad alike, will be vigilant in fighting side-by-side for the rights of our Muslim-American brothers and sisters.

The Passover festival challenges us to see one another as full and equal human beings and, by doing so, to free ourselves from the shackles of indifference and to break the chains of prejudice. Let us celebrate this timeless message of Passover by keeping aglow the light of understanding in a society too often darkened by prejudice and bigotry.

Rabbi Marc Schneier and Russell Simmons are president and chairman respectively of the New York-based Foundation for Ethnic Understanding, founded in 1989.