This question has puzzled biblical scholars, archeologists and all those interested in solving one of the Old Testament's most intriguing mysteries. Was the story of the Israelites fleeing Egypt after years of slavery history or myth? Were there really 10 plagues that became so progressively terrible that they forced the Pharaoh to finally release all the Israelite slaves? Was there really a leader named Moses, and did he guide this "mixed multitude" for 40 years in the wilderness of the Sinai desert?

Passover is the Jewish festival that celebrates the flight of the Israelites out of Egypt. During this Passover season it is particularly pertinent to wonder, did the Exodus really happen?

Clues and speculations abound regarding alleged items of evidence discovered for the Exodus, and nearly all have their champions and detractors. It seems that every time a theory is proposed and the Exodus mystery appears to be solved, it is quickly shot down for one reason or another.

Nevertheless, ongoing archeological and etymological investigations into the Exodus have produced some tantalizing items and scholarship. Presented for your consideration are Exhibits 1-4. Read and wonder...

How could plagues described in an Egyptian papyrus be so similar to those found in the Bible?

In the early 1800s, a papyrus was found in Egypt called The Admonitions of an Egyptian. It is now in the Leiden Museum in Holland. An Egyptian named Ipuwer wrote it at the end of the Middle Kingdom, around 1650 B.C.E.; scribes copied it in the 19th Dynasty, in the 1200s B.C.E. Below are some of the amazingly similar plagues described in both the Ipuwer papyrus and the Bible. (The biblical plagues befell the Egyptians at the time of Moses and the Exodus, which has been dated sometime between 1570 to 1290 B.C.E.) 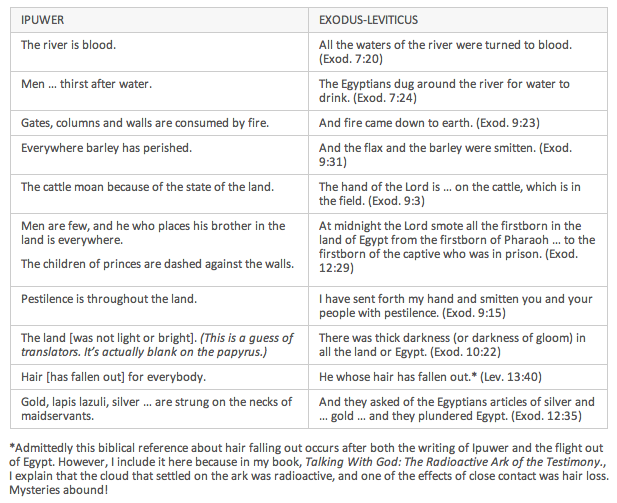 The disparity of the dates between the Ipuwer and Exodus documents is enough to convince many scholars that no relation exists between the two. In addition, prevalent theory now claims the papyrus is simply ahistorical. Be that as it may, the similarities are striking, and why they are remains a mystery. Could it be that the scribes who copied the document at the time of the Exodus were experiencing similar calamities to the earlier ones and were using Ipuwer's words to warn the present-day Pharaoh?

Exhibit 2: The Israelites' Travel Itinerary and the Egyptian Maps

Did the cities the Israelites camped in on their way to Canaan really exist?

One of the most contentious problems regarding the Exodus investigation is the fact that there is no archeological evidence for various places mentioned in the biblical travel itinerary of the Israelites as they fled Egypt for the Promised Land, Canaan. In an article in the September/October 1994 issue of Biblical Archaeological Review, Charles R. Krahmalkov, then Professor of Ancient Near Eastern Languages at the University of Michigan, points out that various scholars have used this explanation to "reject the entire story" of Israel's origins, and therefore the Exodus.

However, Krahmalkov discusses a number of biblical sites that appear to be corroborated by Egyptian sources. Among them are Dibon (Numbers 13:45), a city where the Israelites' camped on their way to invade Canaan, and Hebron (Numbers 13:22), another city targeted for invasion.

Krahmalkov concedes the lack of archaeological evidence, but he points out that the Egyptians thoroughly mapped these sites, as well as a number of other regions mentioned in the Bible. The mapping was done in the Late Bronze age, in Dynasties XVIII and XIX (according to his dating, 1560-1200 B.C.E. He dates the Exodus in the range of 1400-1200 B.C.E.). Also included are the cities of Iyyn and Abel (biblical Abel Shittim) both in Numbers 13: 45-50; Yom haMelach (Numbers 34:3); and Athar (Hebrew Atharim) (Numbers 21:1). The maps survive in list form, and they are found on the temple walls of ancient Egyptian kings. Since they are documented in the most important extra-biblical source -- Egypt -- the evidence is strong that these cities indeed existed at the time of the Exodus.

Was there a Hebrew advisor to Egyptian kings at the time of the Exodus?

In 1987, searchers rediscovered a tomb in the Saqqara region of Egypt belonging to a man they call Aper-el. They say his name is an Egyptian version of a Hebrew name. Aper-el was vizier to the famous Amenhotep III (1370-1293 B.C.E., 18th Dynasty) and later to his son, the monotheistic king Akhenaten. They dated the tomb around 1353-1335 B.C.E., but there is something of mystery here.

The tomb was originally discovered by the legendary archeologist Sir Flinders Petrie in the 1880s. He copied an inscription that spells the vizier's name Aperia. I don't know if the 1987 team found other inscriptions with the -el ending, but -el would be the equivalent of Elohim, one of the terms for God in the Bible. The ending -ia would indicate Ya, short for YHWH or Yaweh, the other biblical name for God, generally translated "Lord." (Think the familiar Halleluya, Hebrew for "praise the Lord.")

It is tantalizing to wonder if Aper-el/Aperia was indeed a Hebrew advisor to the young king Akhenaten. If so, did Aper-el/Aperia influence Akhenaten's thinking toward monotheism? In any case, it would place a Hebrew advisor to the kings within the range of years claimed for the Exodus just as Joseph was to an Egyptian king hundreds of years earlier. In the book of Genesis, Joseph rose from captive to be second only to the Pharaoh, and he was empowered to save Egypt from starvation during a seven-year drought. It isn't known how Aperel/Aperia got there!

Is the name of the Hebrew midwife in Exodus the same as that of a slave mentioned in an ancient Egyptian papyrus?

The Brooklyn Museum has a papyrus, possibly from Thebes, with a list of slaves from the Egyptian Middle Kingdom, about 1740 B.C.E. It includes a slave named Shiphra and others with Semitic names. In the Bible, a Hebrew woman with the same name, Shiphra, was one of two midwives the Pharaoh commissioned to kill all the male Hebrew children at the time Moses was born (Exod. 1:15). She didn't. Since by that time all Hebrews had been put into servitude by the Pharaoh, the midwife Shiphra would also have been a slave. The fact that the name Shiphra is found in both the Bible and the papyrus indicates that the name and the woman's condition of slavery were familiar to both Israelites and Egyptians.

Although the comparisons between the Ipuwer Papyrus and the Bible are tantalizing, Ipuwer alone does not provide absolute evidence for the Exodus and the Passover. For that matter it can't even account for the existence of the Israelites.

As long as there is little tangible archeological evidence and until the mystery is finally solved, we are left to rely on the venerable Passover service to connect us to our past at this holiday season. We must be content to repeat the most pertinent of the famous "Four Questions," which the youngest at the table asks on the first night:

"Why is this night different from all other nights?"

Facts about what really happened to the Israelites can be found in the new book 'Talking with God: The Radioactive Ark Of The Testimony. Communication Through It. Protection From It.' by Roger D. Isaacs. Available at Amazon. Join our ongoing investigation of Old Testament mysteries at TalkingWithGod.net.

Biblical Researcher and Author of "Talking With God" and "The Golden Ark". www.TalkingWithGod.net