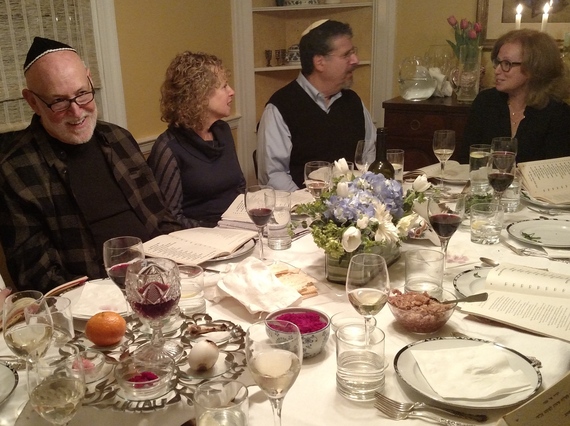 I never liked Passover when I was a kid. Sedars were long and tedious. We couldn't eat anything until all of the blessings were said, and all of the commentaries were read in Hebrew and sometimes in both Hebrew and English. My siblings, cousins and I were expected to sit still and be quiet. Dressed in our good clothes. Hands in our laps. It was understood that we were not to embarrass our parents. Tanta Bella and Tanta Hannah and old cousin Joseph were there. And then, there was my grandmother who seemed to have little tolerance for the normal disturbances of children. She commanded my mother with a shrill voice and spoke almost entirely in German, a language none of the children fully understood.

Then I became a parent, and Sedars became a time to get together with family. One year, we all met at my sister Lynn's house in Connecticut. My brother and his family came from Texas. Gary, Ariela and I flew in from California. The adults told the children that they should conduct the Sedar. The two oldest, my brother's son, John, and my sister's son, Aaron, both around twelve years old at the time, took control and delegated the parts to the grown-ups and younger children. They asked my mother to read the four questions, normally the task for the youngest. The boys told anecdotes and gave us their own commentaries from the lessons they learned in their Jewish day schools. Ariela had a simple switch device then. The switch was hooked up to a tape recorder, and they asked Ariela to lead everyone in singing "Dayenu." It would have been enough. It's an upbeat melody, almost like a march. That was her favorite song. It was a Sedar to remember.

The last time I went to my sister's house for Passover was in 2003. About six weeks later, Ariela had surgery on her spine. She never fully recovered. She could no longer eat by mouth. Air travel became difficult. The next year and all years after that, I opted to stay home and conduct the Sedar myself.

The first Sedar in our home took place around our kitchen table with a handful of friends. The number increased over the years as Ariela's aides and companions became part of our extended family. We usually had upwards of 20 people. Millennials outnumbered boomers. Non-Jews outnumbered Jews.

"It's not just a meal," I liked to remind our guests, but everyone wanted to contribute. Laura -vegetarian chicken soup, Nicole - flourless chocolate cookies, Jo - green salad. We substituted sushi for gefilte fish, because no one liked gefilte fish.

I started our Sedars explaining the basics of the rituals and the story. I sang the Hebrew songs solo, because no one else knew them. With lots of wine, no one complained about my voice.

I asked everyone to bring a story, a poem, artwork, or a song about slavery, freedom or redemption. One year, Lindsey led us all in singing "This Little Light of Mine," a song from the underground railroad. Nicole talked about the people of the Baha'i faith who have been persecuted, tortured and imprisoned in Iran since the Islamic Revolution in 1979.

Over the years, Ariela's communication devices became more sophisticated. But, her devices (computers that generated speech) only spoke English. Days before the holiday, I'd program the prayers in a transliterated Hebrew. We went over the words together trying to reproduce the ancient Hebrew sounds with English letters. Ariela spoke Hebrew with a hi-tech accent. She sat in the middle of our dining room table, surrounded by her friends. She said all of the blessings with her synthesized voice, and everyone answered, "Amen."

This is our first Passover without Ariela. Gary and I went back to Lynn's house in Connecticut. A few of Ariela's friends expressed disappointment, but they understood.

I was glad to be at my sister's house, away from everything that reminds me Ariela isn't here. A small group of Lynn's good friends gathered around her beautiful table. Most could read the Hebrew and say the prayers. They were all familiar with the traditions. My sister, Aaron, now in his thirties, and I sang the old melodies that our mother had taught us. Several others sang along. My sister served real gefilte fish (not the stuff from a jar).

We opened the door for Elijah, symbol of our hope for peace and the end of human suffering, and we were greeted by an icy cold New England wind. I thought about our balmy nights in California and our Sedars there. This is a night meant to be different from all other nights, and in so many ways it was.