Passover begins tonight at sundown, marking the first of eight days and nights of no leavened bread to commemorate the Jews' liberation from Egyptian slavery. Tonight and tomorrow night, observant Jews will participate in Passover seders, structured dinners throughout which the story of Passover is retold.

Themes from the tale are symbolized by five, sometimes six, food items on the seder plate, many of which are also eaten throughout the meal.

Unlike other Jewish holidays, Passover foods are decidedly more nutritious. Compare spring greens and bitter herbs to the deep-fried latkes and jelly donuts of Hanukkah! Below, we've spelled out some of the perks of the seder plate components. Just match the numbered item on the plate to the corresponding explanations below. Then let us know how Passover inspires you to get (or stay) healthy in the comments. 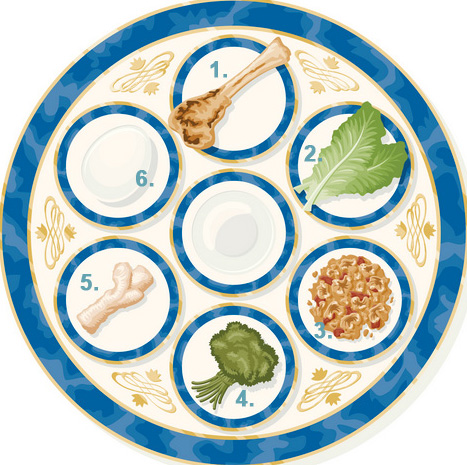 1. Roasted Bone
A symbol of the offering brought to the temple in Jerusalem, the bone is the only inedible item on the seder plate. The bone is traditionally from a lamb or chicken. However, non-meat-eaters might be onto something with their vegetarian substitutions, at least when it comes to health. Both beets (since they appear to "bleed") and sweet potatoes (the "Paschal Yam", a play on the "Paschal Lamb") are loaded with nutritious perks. The deep red color of beets comes from a host of phytonutrients that act as anti-inflammatories and antioxidants. And sweets are loaded with beta carotene, which ups immunity and protects your skin, while providing a hefty dose of fiber.

2. Romaine Lettuce
One of two bitter herbs on the seder plate, romaine is decidedly less nutritious than horseradish (more on that below). (Both bitter herbs symbolize the bitter times the Jews faced as slaves in Egypt.) But that's not to say this lettuce has nothing to offer. A serving packs more than your daily recommended amount of vitamin A, a good dose of C and some fiber, too, all for very few calories.

3. Charoset
Apples, walnuts and red wine all earned spots on our list of the 50 Healthiest Foods Of All Time. This tasty mixture is meant to resemble bricks and mortar on the seder plate, a reminder of the Jews' slavery in Egypt. Together, the ingredients offer fiber, protection against heart disease, inflammation reduction and lowered cholesterol.

4. Karpas
Often parsley or celery, some say this spring veggie symbolizes the newness of the season. (Some use a boiled potato or a raw onion.) While often discarded as a garnish, parsley is actually a very good source of a number of vitamins and nutrients, including A, C and K, folate, calcium, iron and potassium. It's also been used for medicinal purposes, including for UTIs, digestion issues and asthma, among other conditions, according to WebMD.

5. Horseradish
Grandpa might encourage you to eat this bitter herb to clear out your sinuses, but horseradish has doctor-approved perks, too. In fact, the root can be used for UTIs, joint pain and coughs, according to WebMD, thanks to possible bacteria-fighting powers. It's also a member of the brassica family of plants, which includes nutritional powerhouses like kale and broccoli and seems to offer some cancer protection.

6. Hard-Boiled Egg
Another reminder of Passover offerings, eggs have faced controversy due to their naturally-occurring cholesterol. But the dietary cholesterol in eggs has been shown to play no role in increasing risk of heart disease in most people, according to the Mayo Clinic. Eggs are rich in choline, important for memory, as well as lutein and zeaxanthin, key for eyesight. Eggs are also a great source of protein.