On Wednesday, August 1st, Pastor Rick Warren tweeted out a report about a conversation he says he had with Chick-Fil-A owner Dan Cathy in which it's claimed that the fast food chain "set a world record" during the day. His tweet was referring to actions by right-wing religious communities who called upon their congregations to buy food from Chick-Fil-A to show their support for his comments against equal marriage rights for same-sex couples.

During an interview with the Ken Coleman Show, Mr. Cathy reportedly said those advocating for same-sex marriage will in turn bring "God's judgment" upon the United States. He has also defended the millions of dollars his corporations has donated to so-called "family ministries" that fight against the legal recognition of same-sex marriages.

However, on Thursday, August 2nd, a review of Pastor Warren's Twitter timeline revealed that he appears to have deleted the tweet referenced above. Ironically, the tweet immediately following where the Chick-Fil-A related tweet should be is one that says: "Your past is past. It can't hurt you unless you let it." If this is the case, one must wonder why Pastor Warren felt the need to delete the tweet supporting the politicized, anti-equality stance of Chick-Fil-A and its owner. 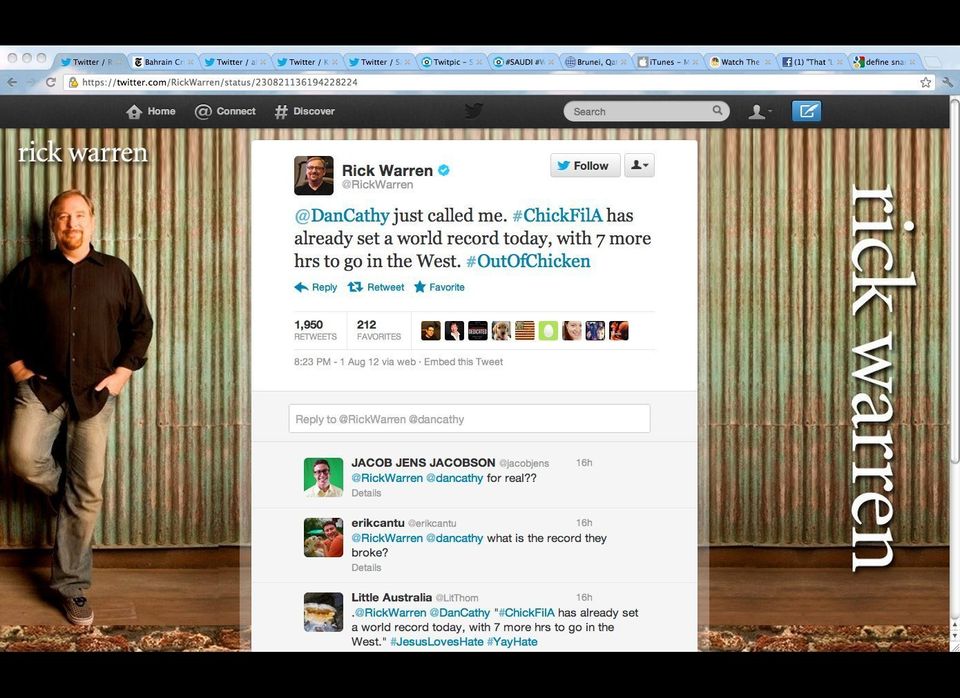 1 / 2
Warren Tweets About a Conversation with Chick-Fil-A Owner Dan Cathy
In this tweet on August 1, 2012 at 8:23pm, Rick Warren reports a conversation with Chick-Fil-A owner Dan Cathy. Implicit in the tweet is Warren's support for Cathy's and Chick-Fil-A's political stance against civil marriage rights for same-sex couples. He is reporting what he claims are the results of calls from right-wing mega-churches to their congregations to buy food from Chick-Fil-A today. This action came in response to calls from within the lesbian, gay, bisexual & transgender (LGBT) community and their allies to boycott the fast food outlet.