While many religious leaders have been vocal about abortion, same sex marriage and other social concerns, they have remained fairly quiet on one major issue: domestic violence.

According to a survey from LifeWay Research which interviewed 1,000 senior pastors of Protestant churches in the U.S., pastors rarely include the topics of domestic and sexual violence in their sermons. 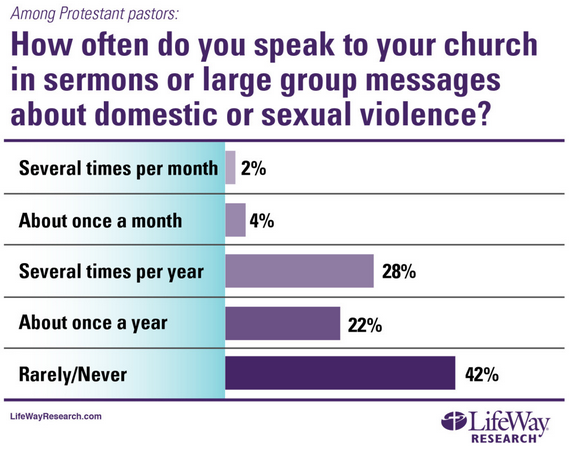 Co-sponsored by the Christian nonprofits Sojourners and IMA World Health, the survey also found that pastors were more likely to believe domestic violence was an issue in their community (72%) than an issue in their church (25%).

“I think many pastors still don’t think it exists in their congregation,” Yvonne DeVaughn, director of Advocacy for Victims of Abuse (AVA), told LifeWay. 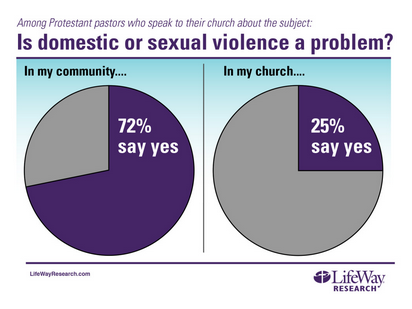 This discrepancy may not be entirely the pastors' faults, however, as 52% of senior pastors say they don’t have sufficient training to address domestic or sexual violence in their communities. 81% said they would work to reduce domestic violence if they had more training.

More than 1 in 3 women and more than 1 in 4 men in the U.S. have experienced rape, physical violence and/or stalking by an intimate partner, according to a 2010 survey conducted by the Centers for Disease Control and Prevention. There is a high likelihood of being or knowing someone to whom this has happened, and according to LifeWay, 74% of pastors know of a friend, family member or church member who has experienced domestic violence. 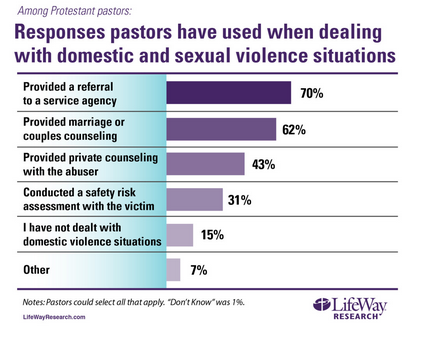 Although only 6% of pastors discuss domestic violence in sermons as often as once a month or more, 70% said they had dealt with domestic violence cases by providing referrals to a service agency. 62% have provided marriage or couples counseling, and 43% have provided private counseling for the abuser. Only 31%, however, have conducted safety risk assessments with victims.

“This is a conversation the church needs to be having but isn’t," Sojourners president Jim Wallis told LifeWay. "We cannot remain silent when our brothers and sisters live under the threat of violence in their homes and communities.”

Among Catholics the discussion of domestic and sexual violence may be slightly more common, not least of which is because of the decades-long sexual abuse allegations the church has dealt with. The United States Conference of Catholic Bishops published "A Pastoral Response To Domestic Violence Against Women" to address the ways in which priests and lay ministers can be "first responders" to instances of domestic violence in their diocese.

The document addresses one reason why priests may shy away from preaching about domestic violence and how they can overcome this to serve their communities:

We ask them to keep in mind that intervention by church ministers has three goals, in the following order:

“The gospel sets prisoners free– and that includes victims of domestic violence, who often feel like prisoners in their own homes,” Ed Stetzer, President of LifeWay Research Division, said. “Pastors can do more to proclaim that message.”