Hey, kids! Remember last Friday, when I warned all of you who live in the Washington Metropolitan area that Pat Buchanan and his most race-baitingest cronies were descending on McLean to rebuild the Republican Party, or at the very least learn racialist kung-fu, at a Ritz Carlton? Well, that happened. And the folks at Think Progress went to this gathering, and lo, they heard Pat Buchanan, MSNBC star, recycling his old criticisms of Sonia Sotomayor, with xenophobic pamphleteer Peter Brimelow. From Think Progress:

PAT BUCHANAN: Judge Sotomayor is up there at school in New York, she gets a scholarship to Princeton, she's graduated with all these big honors and awards they said she never won. What's she doing there in the summer? They said her adviser told her to read children's classics so she can learn English better. How do you graduate number one in Princeton if you're in the summer and you're reading Rumpelstiltskin and Snow White? [laughter] [...]

PETER BRIMELOW: I really do recommend the language issue because you know that polls better than immigration and affirmative action. Eighty-five percent of Americans say they would favor official language policy. The wonderful thing about this issue if you look at what's going to actually happen here is you're going to find that the Obama administration is going to gradually institute institutional bilingualism in the country. It's going to be required to speak Spanish in key positions, the police force and so on. This is a direct attack on the American working class because they are not going to be bilingual.

Yes, ha ha! Sonia Sotomayor may have graduated atop her class at Princeton, but she's Hispanic! And she reread English grammar books to reinforce her studies while in college, which somehow means she was mastering Snow White. Meanwhile, Obama is going to "institute bilingualism" which is a "direct attack on the working class."

Of course, it would be helpful if those "recommending the language issue" had themselves met under a properly spelled banner! 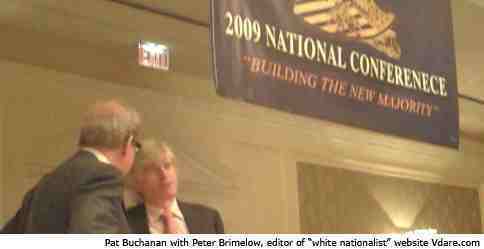