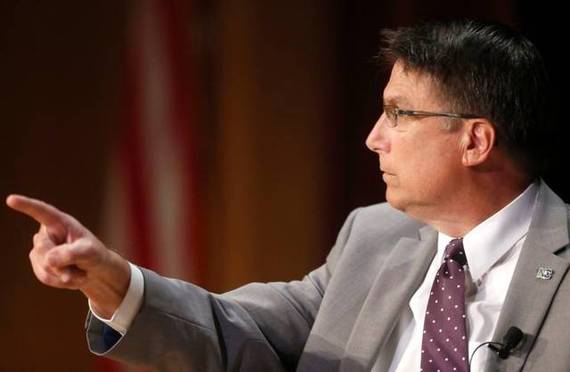 In this month's North Carolina Supreme Court elections, Democrat Michael Morgan soundly defeated Republican Robert Edmunds thereby shifting control of the Court from Republicans to Democrats by a margin of one. With no Court vacancies "currently occurring" which Republican Governor Pat McCrory could fill to shift control back to Republicans, rumors are afoot that Pat McCrory will soon call a special session of the North Carolina General Assembly where the General Assembly will "create" two new Supreme Court "vacancies" for McCrory to "fill" with Republican justices. If this is true, it would not only be a stunning rebuke of democracy. It could well be unlawful under a best reading of the North Carolina Constitution.

Ordinarily, I would hesitate to respond to mere rumors. However, given the haste in which HB2 wreaked its havoc on North Carolina, I feel compelled to respond. In such an environment any delayed response may be a response too late. Other facts underscore such a fear: Pat McCrory and the NCGA recently failed in a previous retention election scheme to keep the State Supreme Court under Republican control. We have no reason to think they wouldn't try again. Additionally, I fear many may not read the applicable North Carolina Constitutional text and simply assume that such a court-packing scheme raises no serious Constitutional questions. For example, I was surprised to receive an email yesterday from one opponent of the rumored court packing scheme who expressly said in his email that the scheme "is allowed under the state constitution."

Since litigation is almost certain to result if the rumored scheme proceeds, I suggest everyone pause and review the rumored scheme's legality and chances of ultimate success. At the very least, let's pause and look at three sections of Article IV of the North Carolina Constitution that are undoubtedly in play. (The text of Article IV of the North Carolina Constitution can be found here.) By limiting such initial exploration to three provisions I don't mean to rule out other potential federal and state problems. I merely want to begin the conversation by focusing on three highly-relevant sections of state Constitutional text. I have little doubt these sections will be among those reviewed in litigation certain to follow any attempted implementation of such a Court-packing ploy.

Section 6 of Article IV of the North Carolina Constitution provides in part: "The Supreme Court shall consist of a Chief Justice and six Associate Justices, but the General Assembly may increase the number of Associate Justices to not more than eight (emphasis added)." As there are now six associate justices, Section 6 would indeed allow the addition of two more associate justices. However, I'm not sure that the best joint reading of Sections 16 and 19 of Article IV of the Constitution would permit the first such additional associate justices to be appointed by McCrory in lieu of being initially elected by the voters. Section 16 provides in part that "Justices of the Supreme Court . . . shall be elected by the qualified voters and shall hold office for terms of eight years and until their successors are elected and qualified (emphasis added)." Though Section 16 requires elections, we all know that people can quit, die, or be removed from office. Thus, as one might expect, Section 19 provides in part: "Unless otherwise provided in this Article, all vacancies occurring in the offices provided for by this Article shall be filled by appointment of the Governor, and the appointees shall hold their places until the next election for members of the General Assembly that is held more than 60 days after the vacancy occurs, when elections shall be held to fill the offices (emphasis added)."

Since Section 16 requires elections, why wouldn't the best reading of Article IV require that initial occupants of new seats be elected unless perhaps there is some extraordinary reason requiring otherwise? Why wouldn't a best reading of Article IV treat Section 19 as a common-sense provision allowing temporary appointments for "vacancies occurring" after any such initial election? Isn't such a common-sense reading underscored by the fact that Section 19 begins with the deferential language "Unless otherwise provided in this Article"? Doesn't that qualifier expressly provide that Section 16 trumps Section 19? Wouldn't such a common-sense reading therefore both acknowledge elections mandated by Section 16 while also recognizing that seats initially filled by election may thereafter become vacant and may therefore need temporary, good-faith appointments to fill them in accordance with Section 19? Wouldn't such a common-sense reading prohibit the type of Court packing scheme now rumored as planned?

I ask these purely-textual questions because they cut to the chase and because the state Constitution is the highest state law. While I am familiar with Pope v. Easley, that case is nearly fifteen years old and involves the Court of Appeals, not the Supreme Court. Additionally, the specific textual analysis I perform here is not performed in that case, and to the extent any prior case law has misinterpreted the state Constitution, that prior case law must be corrected.

Since I've just recently heard these troubling rumors, I'm still examining and reflecting upon the Constitutional text as I hope others are. I'm doing this because the stakes are high. I'm doing this because we shouldn't accept without debate troubling claims that partisan appointments trump democracy or troubling claims that Section 19 trumps Section 16 where the Constitutional text can easily be read in other ways. As I wrestle with all this, I also wonder why North Carolinians would tolerate the expense of two new Supreme Court seats without strong proof that we need them to perform the functions of the Court. I also struggle with how Pat McCrory could possibly wish to tarnish his image even further with such a scheme. For everyone's sake I hope the rumors are not true.