Sometimes I stick in earbuds when my iPhone is dead and listen to silence just to avoid talking to strangers.

When my dearest friends had to cancel their trip to join me in Patagonia, I packed two sets of earbuds for my journey, just to be safe.

The village of El Chalten, Argentina, is surrounded by shrubs, then sharp peaks spilling over with glaciers, and solitary neon blue icebergs fading into a silent lake. Smokey clouds swirl above, masking a painfully powerful sun.

Ostrich-like rheas and herds of guanacos frolic across the countryside. A wire fence along the village's route is dotted with the tangled flesh and skeletons of trapped creatures.

I entered the hostel kitchen after my first day hiking decked out in long underwear, no shoes and a sunburned red nose. A petite woman with long, black hair was stirring a pot larger than her head.

Breaking through the silence barrier with a stranger is the hardest.

I went with: "Ooh, that smells good!"

The barrier quickly crumbled as she mixed canned vegetables and pasta while I microwaved instant potatoes and learned she was an Australian doctor backpacking alone around the world for a year.

We had climbed the same trail that day, so I asked, "Wasn't that turquoise lake at the top just amazing?"

She stopped stirring and squinted. "Lake?"

She had missed the viewpoint at the top by about 10 meters. 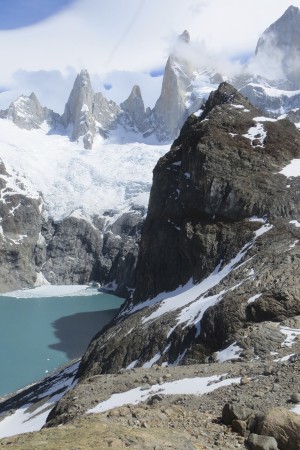 We laughed over this together, and then she asked, "Do you want to share my dinner with me?"

My mug full of instant potatoes was congealing, so I accepted the offer.

Soon, we were joined by an Indian engineer I'd met on the bus ride down and a Mexican telecommunications worker who, after an hour of conversation, nervously asked me, "Why do people in the U.S. hate Mexicans so much?"

I have shared beers in Uruguay with Brazilians as news broke our country allegedly had spied on their country.

I have shared naan in India with an Afghani during the U.S. war in Afghanistan.

It's hard to see a map's lines once you have shared a meal across borders.

The next morning, the Australian woman ran out of coffee. I had two packets left, perfectly planned for my two remaining days in Patagonia.

I live for my coffee packets. I shake packets into bottles of cold water when hot water and mugs are unavailable. I pour these coffee grounds dry into my mouth while driving just to get my fix.

As my caffeine-addicted brain screamed, "NOOOOOO!" there I was, hesitantly handing the Australian woman one of these precious coffee packets.

Our motley crew hiked together that day, and a funny thing happened. I began bickering over directions with the man from India as if he were my brother. A chain-smoking Swiss man confessed to me that he had fallen in love with someone other than his fiancée, as if I were his best friend. I nagged the woman from Australia about safety, as if I were her mother. Here we were, strangers forming a family. 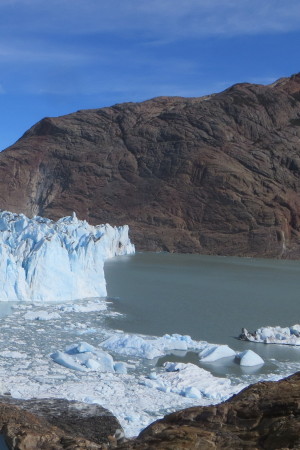 I've been told Viedma Glacier retreated from the faint white line in under one year, faster due to climate change. I hope future generations can see this majestic place.

And yet, we shared fresh ideas aloud that we had not even run by our family or friends. Three hours into the hike, we passed through a tangled forest rich with the delicate green hairs of fresh air-loving lichen. Amid the Australian doctor's tales of practicing medicine in East Timor, the Mexican woman quietly murmured, "You know, I've always wanted to be a doctor, but my mother disapproved. Maybe I will go to medical school and become one."

This was the first time she had expressed this life-changing idea aloud. As we ambled over a path of stones, she talked through the logistics, tried it on for size amongst us non-judging strangers, and realized this is what she wanted to do with her life.

Sometimes it is among this safety of strangers that our wildest dreams emerge. You can test the waters without repercussions.

Family and friends are our long-term memory. Those words spilling from our mouths -- they stick. But if the Mexican woman changes her mind, there's no accountability (in the best sense of the word). The worst that happens is a handful of strangers from around the world will think there is a woman in Mexico starting medical school.

I don't know if the Swiss man will leave his fiancée for the woman with whom he has fallen in love, but he's letting the secret sit with a perfect stranger for the time being.

When I decided to uproot my life and travel the world, the first person I told was a stranger in Japan. I gauged his reaction and felt how it sat on my tongue.

We reached a lake resting below a glacier. Shards of ice litter the edges, like Mother Nature got drunk, smashed vodka bottles and strew them across the sand.

Behind the lake towered cliffs swarmed by clouds of different varieties: Some clouds laced their frail fingers between the peaks, and then others streaked in thick white blocks, a smudge tool across the sky.

I thought we were alone, until I realized the view was lined with people quietly staring at these peaks. At first, I was offended; I selfishly wanted to experience nature without strangers blocking my view.

But as I stood with these strangers, I became connected to this row of nameless faces arriving from around the world to forever share this memory together. 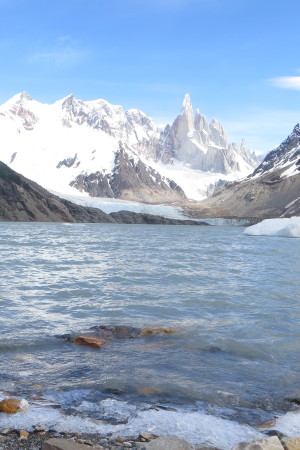 On our last day, as the Australian woman was heading West and me, East, I gave her two used Ziploc bags. She clenched them and exclaimed, "My god, Ziploc bags, I've been desperately needing these. Thank you!"

There is a train conductor in India who gave me his only bottle of water as I threw up over the platform during a monsoon.

There is a businesswoman in Los Angeles who sat in an intersection with me after I crashed my car, telling me stories about her daughters until the paramedics arrived.

There is a fisherman on Easter Island who volunteered to lead me into a dark hole in the ground, guiding me through a cave overlooking the sea.

There is a policeman in New York City who bought my train ticket home when I lost my wallet.

These strangers are all dear to me. Our paths may never cross again. Within days, I forget their names and their faces blur. But if friends leave footprints on our hearts, then I suppose strangers leave little tiny pinkie prints that collectively create a handprint shaping us as well.

There are a few strangers I have seen again, when I am back home. But something is different.

Reuniting in the real world is hard because our brains are thinking in 140 characters or less, and we are dressed in layers that we think define us: Our professions, our clothes, our newest phone.

Traveling is like a food strainer. It filters out all that gunk bogging us down in everyday life, from e-mail inboxes and fashion fails, to cutting-edge diets and buggy iPhone apps. What you're left with, the Australian doctor and I concluded together, is purity.

Which place really is the "real world" then?

There exists a world where we define ourselves with car models, business cards and clothing labels.

But there also exists a fleeting world where, among our dearest of strangers, we have brief moments of clarity.