No one wants to pay for free stuff, and why should they? However, when you buy a television, DVD player, a computer, or a number of other tech devices, you may be paying more than you should, and there is nothing that you can do about it. Here is a story about how consumers are quietly getting ripped off.

Some products use hundreds of patents to manufacture. For a manufacturer, getting access to these patents is essential to producing and creating competition in the marketplace. Assume, for instance, that a DVD manufacturer works out deals to use dozens of patents, but one competitor chooses to withhold access one essential patent. The product never reaches the market.

To avoid this problem and encourage competition, "patent pools" allow the aggregation of intellectual property rights by their owners for the purpose of providing essential access these patents. In this way, a patent pool operates like a joint venture that is set up to administer cross-licensing arrangements of the patent pool. In effect, a manufacturer pays a fee to get access to an entire bundle of patents, thereby encouraging innovation and competition. The Department of Justice (DOJ) reviews and approves patent pools in order to assure that they are procompetitive. That all sounds like good news, but wait.

As noted by Steve Forbes, here is the big problem. Most of the patents in the MPEG-2 pool have expired, which means that companies would normally be free to use these patents without paying any royalty. Yet, these expired patents continue to be part of the pool and companies are paying more to make these consumer goods.

The chart below shows that the original number of active patents in the MPEG-2 Pool was well over 1,000, but that number will fall to approximately 416 by mid-June of 2013, as most patents have expired. If companies are being forced to pay for expired patents, consumers are paying more for their products than they should be paying. 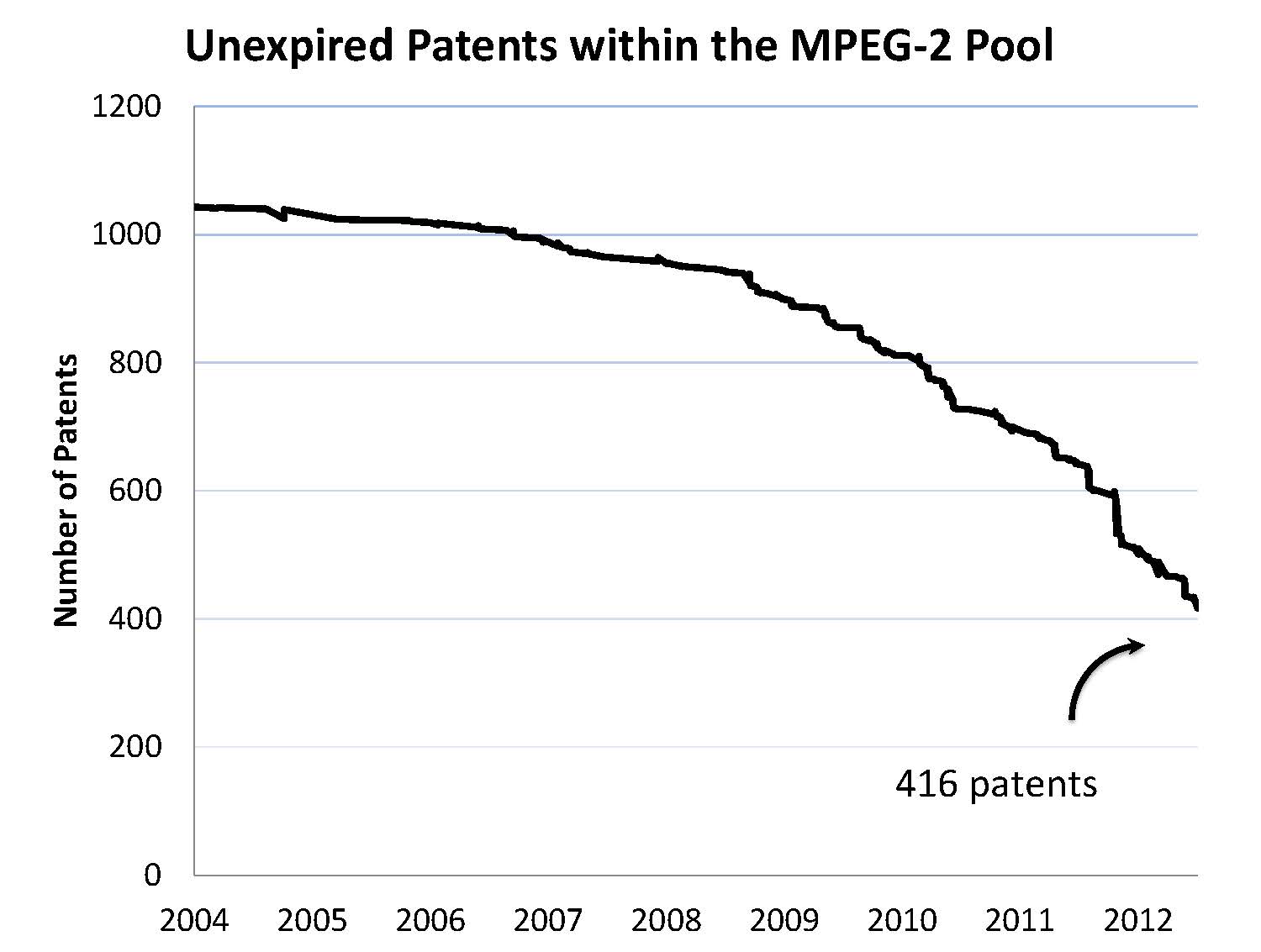 Since January 1, 2010, the MPEG-2 administrator has collected a fee per device manufactured that uses the patent pool, including $2 for an encoding license, $2 for decoding license and $2 for a consumer products license. If we base the $2 fee on the number of active patents, the decay in price would fall from $2.00 to $0.93 by June 2013 -- by more than half. Yet, the MPEG-2 administrator, MPEG LA, still collects the original $2 fee. Essentially, manufacturers are paying for something they should no longer be forced to pay, and consumers are ultimately footing the bill.

By some view, the pool is being used to extend the length monopoly rights given to patent holders. The extension of monopoly rights could mean market power and higher prices for consumers. In turn, that may pose anticompetitive risks, because extending the life of the patent can serve to lockout competition, stifle innovation and it ultimately raise consumer prices.

If it were not for the fact that the DOJ approved this pool, forcing companies to buy things they don't want in order to get something else could be considered an antitrust "tie-in." In essence, a tie-in might occur when one company requires others to buy things of little or no value (say, something no longer patent protected) in order to buy something that is essential and in short supply (say, something patent protected), while not allowing the essential product to be sold separately. In other circumstances, forced bundling might be considered an antitrust violation.

To summarize, no one wants to pay for free stuff. The MPEG-2 pool appears to do just that -- requiring manufactures to pay for patents that have long expired. If patent pools cannot move to more rational pricing to account for the diminished value of the significantly smaller-sized patent pool, the DOJ should reconsider its stance.