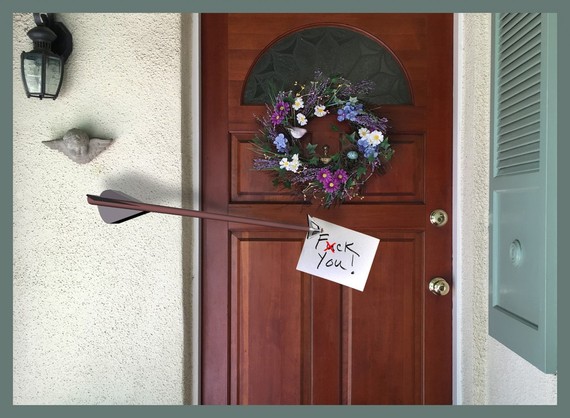 "He that can have patience can have what he will." ~ Benjamin Franklin

"The strongest of all warriors are these two -- time and patience." ~ Leo Tolstoy, War and Peace

I try to be patient. I really do. Many people I know are able to shrug it off, roll with the punches and take it in stride when service is abysmally slow, people are late, and someone uses 100 words to answer a question rather than the five or six that would suffice perfectly.

Me? I tap my foot and sigh loudly, construct and fire off texts about the importance of being punctual, and on occasion I have reached into someone's mouth and literally torn the words out. The latter may be a slight exaggeration, but not by much. I am not a patient person.

It has come to my attention by way of texts, emails, snail mail, voice messages and a note affixed to my front door by a medieval crossbow-type arrow that some people don't appreciate my particular brand of impatience. I would like to point out that I am the progeny of a man whose motto is "time is money." It's really not my fault.

My, let's call it "eagerness to have things happen in a timely manner," which manifests in a variety of ways, often upsets the people I care about, so I have decided to become more patient. I made a list of five ways to accomplish this goal, because that is what patient people do with their time

1. Focus on the positive.

When someone is late to an appointment, dinner party, or to pick me up on a subzero January morning after I've said 10 times I am happy to take a cab, but they insist on picking me up anyway, and then they arrive half an hour after they promised to be there, I will simply focus on the fact that I am the high level kind of person who has appointments, there are humans and canines with whom I can dine at will, and I've got electric underwear that prevent me from becoming Wisconsin ice sculpture.

Next time I ask someone a simple question -- such as "are you free for lunch?" or "what time is it?" -- and the response includes the words gluten-free, microaggression, anthropogenic, Angela Merkel, digital darkness, almond shaming or mommy-and-me, it will appear as though I have lapsed into a drug-induced coma. In reality, I will have taken a subconscious sailboat to the South of France, where a waiter named Jean-Luc awaits me with a chilled bottle of Sancerre and a crusty baguette.

Rather than erupt with homicidal rage the next time it takes three lights for the person in front of me to make a left turn at an intersection, I will ask myself, I wonder what he's going through in his life that a simple driving function such as making a left hand turn at a light causes him such consternation, and whether my boot up his... nope. Nope, nope, nope. The new me will walk a mile in his shoes, not ram one of them up his keester. Perhaps he is happily daydreaming of Jean-Luc and French bread, or a kinder, simpler time when dinosaurs roamed the earth, and turning at a light was less stressful because there were fewer cars.

Off a bong. Just kidding, although once it's legal in all 50 it is not a bad way to go. I'm pretty sure it's a lot easier to be patient when you're giggling like a schoolgirl and shoveling Doritos into your maw.

Nothing says "slam on the brakes" like a roll in the hay. No good comes of telling the other person, "Get on with it already! I've got a Lean Cuisine in the micro!" Sure, we've got our quickies and nooners, but it's the languid hours of lovemaking and long sultry nights of lust that become literature, make cinematic history and add to the list of "happy places" we retreat to when people use lactose intolerance as an introduction to a much longer discussion about the benefits of high colonics, when all we really wanted to know was whether it came with fries.