You may remember seeing an article on Artinfo Australia in December 2012 about a giant sculptural hot-air balloon by world-renowned Australian artist Patrica Piccinini that had been commissioned to celebrate the 100th birthday of Australia's capital city, Canberra. Well, the balloon dubbed the "Skywhale" has been revealed in all its glory and sent on its maiden voyage in preparation for the official unveiling in Canberra on May 11. 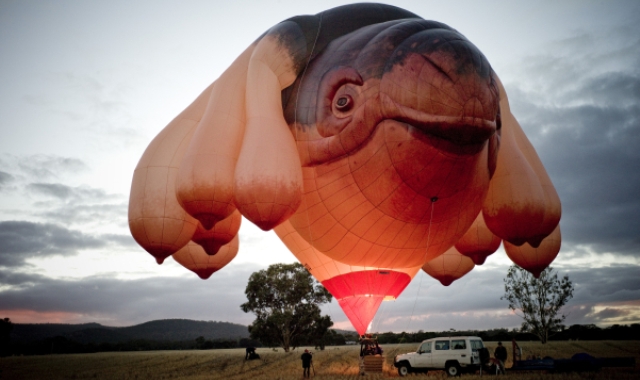 With a turtle-like face and ten udders hanging from its undercarriage, "Skywhale" has a strangely serene presence that belies its somewhat grotesque form. Through the unmistakable maternalism of the giant floating creature, Piccinini asks viewers to question the relationship between people, nature, and technology as well as contemplate issues relating to genetic engineering and biotechnology.

The strange yet beautiful creature created by Piccinini has raised eyebrows around Australia and received mixed reviews. Comments so far have ranged from "hideous" to "innocent and naive." But regardless of whether or not the work is to your taste, one thing is for sure, you can't miss it. And this is one of the reasons that it will go down in history as such a memorable and remarkable gesture.

"I imagine it against the clear blue canvas of a Canberra sky, odd yet somehow comforting," Piccinini said in her original vision for the commission. "It plays on the idea that the relationship between planning and nature can lead to outcomes that are extraordinary in ways that are unanticipated."

It may resemble what one person described on Facebook as a "10-titted dodo," but those who follow Piccinini's career will recognise the commission as a grand and wonderful continuation of her favourite theme of questioning our responsibility to the creatures we create.

"My work rarely attempts to present the viewer with a definite answer to the great questions of our day," Piccinini explains on her website. "I believe it is up to the community to discuss and resolve these issues. However, I do have very clear views about some things. I strongly believe that we have a responsibility to anything that we might create, regardless of whether we judge it to be useful or successful or otherwise. I am also convinced of the intrinsic value of diversity. As far as I'm concerned, the more different creatures there are in the world the better it is."

"I Wanted to be a Painter": David Lynch on His Film Career's Art School Origins