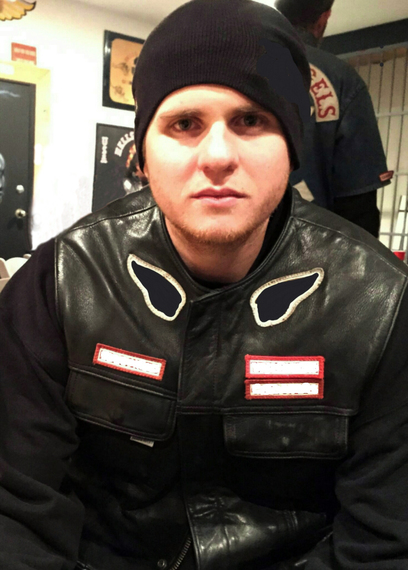 As early as the third grade -- while his friends were imagining futures as firefighters, pilots, and race car drivers -- young Patrick Eberhardt never once wavered: "I'm going to be a Hells Angel, just like my dad."

Patrick grew up around the club. His father became a member when his son was only five. Over the years, Patrick was intrigued by more than adventure, and emulation of his dad, but by the loyalty, courage, and respect he saw transpire among the brotherhood.

From a young age, his character remained consistent: He was brave, determined, accountable, and passionate about doing the right thing. When someone dared him to bungee jump, 12-year-old Patrick took a fearless leap, without hesitation. In Jr. High, he spent hours at a skating party -- not hanging out with friends -- but helping handicapped kids encounter the rink, so they wouldn't feel left out. At 16, Patrick abandoned sports to take on the responsibilities of a job. And he had a special place in his heart for under-privileged kids, as well as the homeless.

But most of all, Patrick was committed to a dream. When he was 12, his best friend, Stephen, showed off a prize possession: a used, non-working, orange, mini-bike. When Stephen suggested that with this bike, they were, now, on track to become Hells Angels, Patrick explained the rules-- the best way a 12-year-old can: "No, Stephen. It doesn't work like that. We have to be way older. And we'll need real motorcycles -- the kind that goes fast. But someday, I'm gonna do it."

And just as he'd vowed, by age 20, Patrick was voted-in as a full patched member. As the son of Bob Eberhardt -- the Cave Creek Charter's President -- he'd fulfilled his life-long dream: officially becoming a second generation Hells Angel.

I met Patrick, for the first time, when Sonny took me to see him in the hospital. It was January of 2014, and Patrick had just endured a near fatal motorcycle accident. Doctors expected a long and difficult recovery. Yet, true to his nature, that Angel was back on a bike by August.

But on February 7, 2015 -- just a month after his 23rd birthday -- Patrick was riding down Bell Road with his childhood pal, Stephen, and several club brothers, when shots fired by a hidden coward struck two best friends.

Stephen survived. Patrick did not.

The following morning, I attended church, grabbed some coffee, and headed for Sonny and Zorana's ranch. I knew nothing. I hadn't read the paper, hadn't received a text, or a call. I was virtually clueless.

So, just moments after I arrived, Sonny took me aside to break the news. Unable to grasp the loss of such a young soul, I had difficulty comprehending he was referring to Patrick.

And it wasn't easy for Sonny. Patrick was more than his club brother. Sonny had loved this young man since he was a toddler.

In reality: I don't know anyone who's fully come to terms with Patrick's death. The magnitude of such dark and sudden shockwaves never seemed to settle.

But despite the grief, hundreds gathered in loving memory, as bike after bike followed the hearse to the cemetery -- for Patrick's last ride.

To memorialize his son, Bob commissioned the powerful words of Shakespeare -- painted in red on Patrick's gleaming, white casket: "Cowards die many times before their deaths. The valiant never taste of death but once."

For those who knew Patrick, and for those who did not, his legacy continues: He'll always be remembered as a good and courageous individual, filled with passion, determination, and loyalty -- a young man destined for honor.

It's often said: Angels never die. And, in this case, I'm certain it's true.

Candy Chand is a writer living in Cave Creek, AZ. She's been interviewed on Fox and Friends, NPR and PBS. Follow, and message, her on Facebook @ Candy Chand--Writer

To donate to Patrick's Memorial Ride and Charity Auction (all proceeds go to needy children), please click on the following link to the official donation page. Thank you.