Empire State of Pen from BigAnimal on Vimeo.

The skyline of New York City is filled with so much detail, character and history, that taking it all in is quite the challenge. Drawing it is another story, however. Hence our dropped jaws in the face of Patrick Vale's timelapse video "Empire State of Pen" -- a reference to Jay Z and Alicia Key's collaboration, "Empire State of Mind."

The London based artist draws an incredibly detailed account of the city that never sleeps as seen from the top of the Empire State Building. We're betting he didn't get much sleep either given the intricacy of his penmanship and the copious amounts of tea he drank to finish the project. Our interview with the artist is below. Scroll down for a slideshow of the work.

HP: What made you want to draw the city from the Empire State Building in the first place?

A recent trip to NYC reminded me of the earlier drawings I used to make, and armed with reference shots I decided it was time to re-visit old haunts. I wanted to try and capture the energy and spirit of the place through the line and what better way to do that than with a time lapse, plus I wanted to show people that I draw completely freehand.

PV: I set up my iPhone on a makeshift rostrum held together with duct tape and away i went. Four to five days later it was done!

HP: How many cups of coffee did you drink in the process?

PV: Being an Englishman, it was mostly tea but technically it would have been five as i usually have one in the morning. As the drawing progressed I got more and more nervous about spilling something; luckily that didn't happen, though it would have looked cool in the time lapse!

HP: Where did you decide to begin and when did you know you were finished?

PV:I always draw a few buildings in the lower middle of the view first and if you get them right then everything else kind of fits round them. I draw quickly as I'm not that fussed about getting everything perfect (I treat it like i'm drawing on location and being spontaneous) but i do keep an eye on the scale of things and keep checking back to the first buildings I plotted to see if they look in proportion.

I always knew that it would need the heavier lines at the end to make the foreground pop out and to help move the eye through (it's a big piece, maybe 80cm x 80cm) but that didn't make it any less nerve-racking after working on it for three or four days..so you kind of have to just go for it and stop before its overworked.

HP: What was your favorite building or city block to draw?

PV: Towards the end there is a building on the left I had a few issues with; I think I kept drawing the roof too big, so i used correcting fluid a few times. You can see it in the time lapse disappearing and reappearing, but it was satisfying to get that right!

Like I said before, I'm not that precious about drawing a true representation -- I just try to let the pen decide what needs to be shown.

Check out the video above and slideshow below to watch one of the world's fastest-paced cities grow right before your eyes. 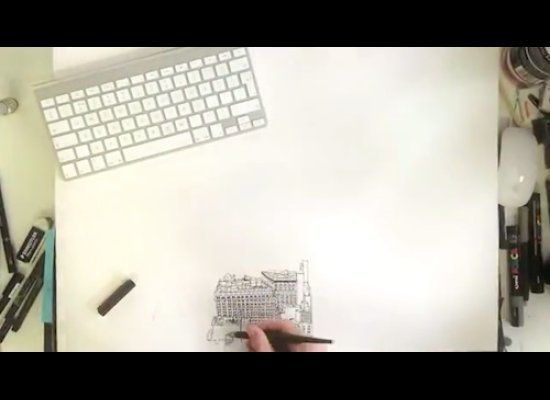