In today’s Huffington Post Gay VoicesRaiseAChild.US “Let Love Define Family™” series installment, Patrick Roth and Wade Holmes share how reading tragic news stories about LGBT youth suicides spurred them to open their home and hearts to a gay-identified foster youth who is now a permanent part of their family.

After adopting his daughter Julia through a private arrangement 16 years ago, Patrick Roth and his now husband, Wade Holmes, turned to the foster care system for a very special reason when they decided to expand their family.

“Although we had discussed adopting again for many years, we finally decided to do something concrete after a wave of media stories involving LGBT youth committing suicide and being bullied,” Patrick explained. “We knew we had the means, space and love to offer. We specifically wanted an older, harder to place child and were very open to one who was self-identified LGBT.”

Patrick and Wade’s subsequent journey on the road to a second child led them to foster and then adopt Cephren. Now 14, the boy was 12 years old when he came to live with them.

The couple describes their son with pride.

“Cephren came to us with his personality largely developed. He is very responsible, respectful and caring,” said Patrick. “He’s a negotiator, but rarely does he argue or raise his voice in anger. Given his family history, and what transpired for him to be removed from them, we are very proud of how positive and happy he is. Showing him how different his future possibilities are now from what they were is an ongoing task, but we are delighted to see him evolve and open up to them. He is a very sweet boy who loves to be around his family.” 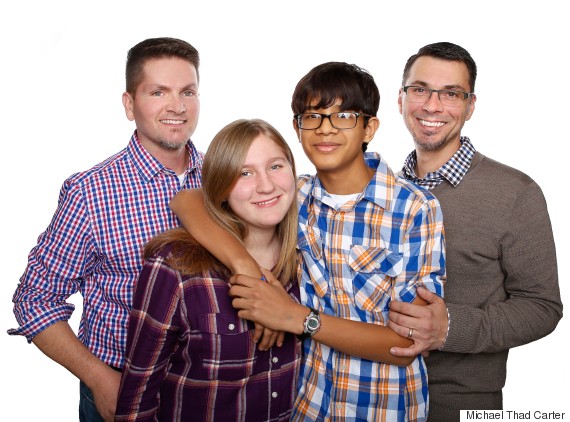 Patrick Roth, 46, is a financial analyst at the University of Texas at Austin and his husband, Wade Holmes, 47, is a director of partner management at Salesforce. Their daughter Julia, now 16, was privately adopted at three weeks old in Indiana through an unplanned opportunity that arose through family connection. After the family moved to Texas and the couple sought to adopt an LGBT youth, they reached out to an agency that worked with the state Child Protective Services to learn more about the process.

“We specifically sought out an agency we knew from reputation had a nondiscrimination policy and was eager to work with the LGBT community,” Patrick said. “The agency was also very honest about the process and that we might encounter push back, or likely just be ignored, by some more conservative-minded CPS caseworkers who are the gatekeepers to all kids in the system. Ultimately, we were chosen as a match by a caseworker who was looking for a same-sex household for an openly gay youth she represented. And the licensing process was not really any different for us than any other couple. Our agency advocated on our behalf and treated us as they would any client.”

Julia’s adoption was very easy and handled through private attorneys. After the couple married 10 years ago, Wade adopted Julia in Indiana through a co-parent adoption. Both fathers’ names appear on her birth certificate. In contrast, Cephren’s adoption was a much lengthier and involved process that required two separate court proceedings in two counties, with licensing and several layers of approval.

“Each of us had to adopt Cephren separately due to Texas laws, but both of our court dates went smoothly,” said Patrick. “Both judges were happy for us and openly stated their agreement that we should be a family.” 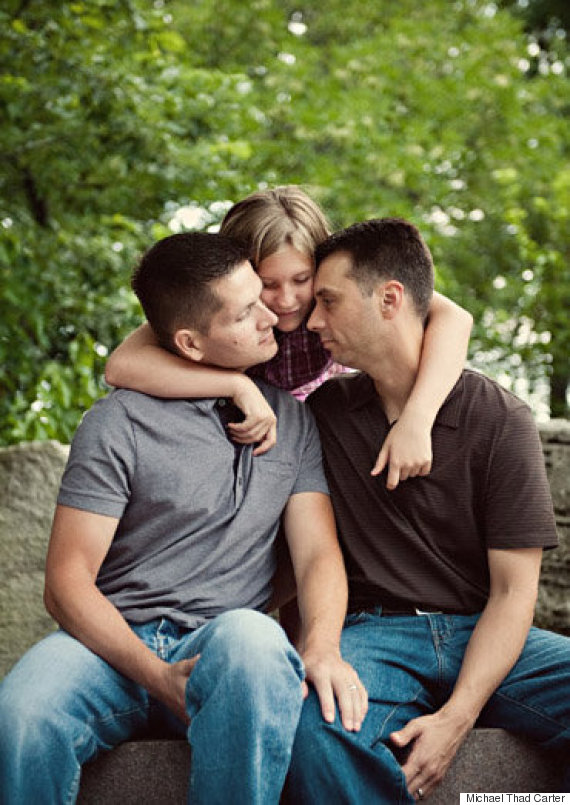 “Legally, the biggest problem for us in Texas is that we cannot both be on our son’s birth certificate,” Wade explained. “Texas law does not allow for more than one man or woman on a BC. They still state ‘Father’ and ‘Mother,’ and have not been altered to ‘Parent’ and ‘Parent’ as they have in some more progressive states. Since Patrick was the first to adopt, only he is listed on the birth certificate. We have a court decree that states I am also a parent, of course. Fortunately, this didn’t present any difficulties in obtaining a U.S. passport for Cephren. The federal government is much more up to date with these issues than some states.”

Having adopted children of such disparate ages, Patrick and Wade are in a good position to reflect on personality development.

“Cephren came to us with his personality largely developed, but Julia is a fascinating study on the ‘nature vs. nurture’ argument,” said Patrick. “Even though we have raised her since birth, we know her mother, and Julia is very much like her in many ways. She is very strong willed, fearless, and stubborn. She is not concerned with peer pressure or what others think of her. We are very proud of the way she can bounce back from anything and carry on with a smile, looking towards the future.”

Both men talk about the tremendous impact fatherhood has made on them.

“I didn’t have a constant father figure in my life growing up,” said Patrick. “I’ve lived most of my life without that dynamic. I missed it a lot when I was younger, and always wanted to have children so that I could be the father I didn’t have. Parenting has been a never-ending lesson in patience and humility. It also opens you up to unconditional love like nothing else can.” 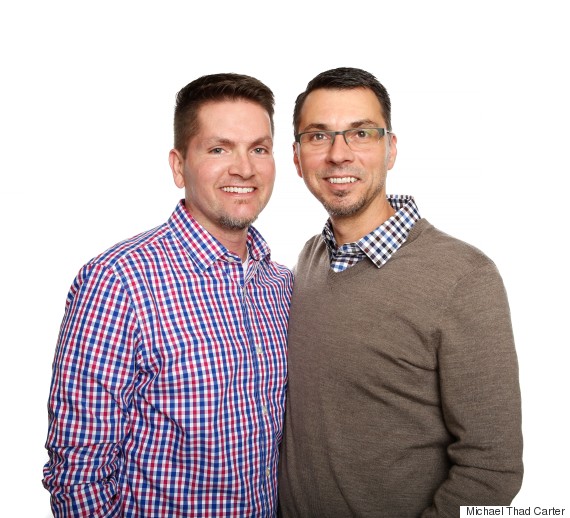 While Wade didn’t feel the pull to become a father from an early age, he has also found it deeply fulfilling.

“Parenthood was not something that I ‘dreamed’ about, but now I would not change a thing,” he said. “I take joy in watching the children develop into the people that they will become.”

Becoming a parent has helped him understand his own mother better.

“I have a very strong relationship with my mother that has moved beyond just parent-child to one of friendship and mutual respect,” he said.

Both men enthusiastically encourage others to consider adopting from the foster care system.

“This is a big point -- there are fantastic kids in the foster care system!” said Patrick. “We know so many people who have fostered and/or adopted through CPS in various states, and they have wonderful, amazing kids. Some kids have more trauma than others. Some need more love and commitment to shine, but they all have the ability to surpass anyone’s wildest dreams. We’d also say that people shouldn’t be afraid to seek out older kids. The statistics for the futures of the children who age out of the system are frightening. It is never too late to make a difference in their lives! They can blossom and change in ways you can’t imagine.”

“Many states also offer incentives for those adopting older kids such as ongoing financial stipends, health insurance, or even college tuition benefits,” Wade points out. “These are great kids. They just need a family and a chance. We’d also like to add that people shouldn’t be afraid of not being approved or picked to be parents because of being LGBT or single parents. There are many thousands of kids awaiting forever families and agencies are getting more and more accepting of diversity. Kids need families and if you can provide a good, stable, loving home, then chances are you’ll find one (or more!) children who are right for you.”

Corinne Lightweaver is the Communications Manager at RaiseAChild.US, a national organization headquartered in Hollywood, California that encourages the LGBT community to build families through fostering and adopting to serve the needs of the 400,000 children in the U.S. foster care system. Since 2011, RaiseAChild.US has run media campaigns and events to educate prospective parents and the public, and has engaged more than 2,500 prospective parents. For information about how you can become a foster or fost/adopt parent, visit www.RaiseAChild.US.