Patti Burke, from Melbourne, Fla., thought Pepperidge Farm was running some sort of special promotion when she spotted a crown and cross imprinted on a Goldfish cracker. 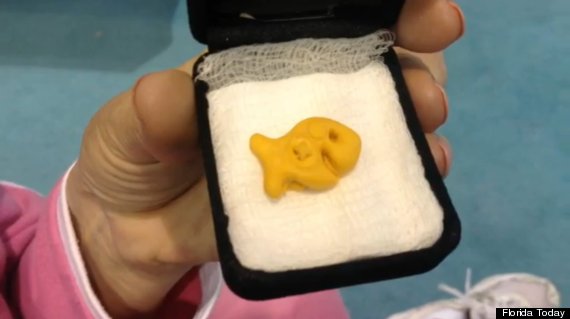 “They called me back and said there’s no way this could have been printed like that in the factory," she told Florida Today. "They said it sounds like something miraculous happened."

Burke found particular significance in her discovery because she made it during Holy Week, the week before Easter in the Christian religion. Also, the fish symbol holds prominence in the Bible, where it's written that Christ fed 5,000 people with two fish and five loaves of bread and referred to his disciples as "fishers of men."

Sacred sightings like Burke's have popped up in all forms. In February, one man from Ohio claimed an image of Christ appeared in bird poop splattered on his windshield. Another man in Texas said his burnt breakfast taco displayed Jesus' face.

What do you think? Is Burke's Goldfish a sign from God?