The vision of Jesus that changed Paul from a Pharisaic Jew to a Christian Jew happened, says Luke's Acts of the Apostles, on the road to Damascus. That event is so important that Luke records it three times for maximum emphasis: first, as it happens (9:1-19); next, as Paul tells it to the Roman officer in Jerusalem (22:3-21); and, finally, as Paul tells it to the Jewish king, Agrippa II at Caesarea Maritima (26:1-18). But that triple account, written around 50 years after Paul's death, has two major historical problems.

The first problem is that, according to Acts, Paul is travelling to Damascus empowered with authority from the high-priest to arrest dissident Christian Jews and bring them back to Jerusalem for punishment. But, whatever about high-priestly power in Judea, it could never have been exercised across Roman provincial borders as far away as Damascus.

On the other hand, Paul himself tells the Galatians that after that vocational vision, "I went away at once into Arabia, and afterwards I returned to Damascus" (Galatians 1:11-17). Paul's vision, in the city of Damascus is much more likely as venue than on the road to Damascus. 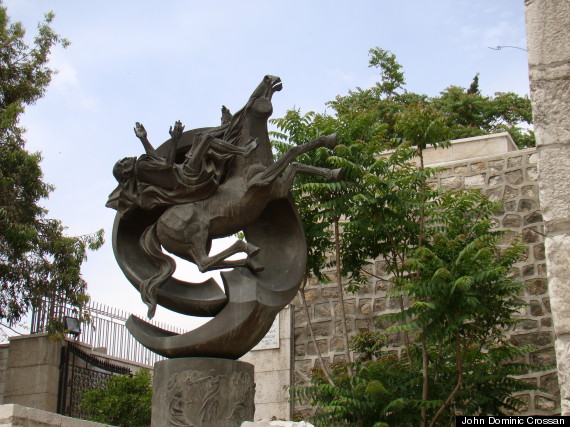 Persecutor and persecuted were probably members of the Damascus synagogue where Paul had most likely received his previous Pharisaic education.

On the other hand, Paul himself insists that his sight of the heavenly Jesus makes him equal in authority with the Twelve Apostles who saw the earthly Jesus. As he argues in his first letter to the Corinthians: "Am I not an apostle? Have I not seen Jesus our Lord?" (9:1). And later: "Last of all, as to one untimely born, he was seen also by me. For I am the least of the apostles, unfit to be called an apostle, because I persecuted the church of God" (15:8-9).

For Acts, only those first 12 were "apostles" and Judas' replacement had to be "one of the males [Greek andres] who have accompanied us during all the time that the Lord Jesus went in and out among us, beginning from the baptism of John until the day when he was taken up from us" (Acts 1:21-22). Acts not only excludes Paul from ever being an apostle, it insures there will never be any more apostles and, above all else, not any women apostles.

The other major conclusion is just as important. Paul already knew enough about the life, death and resurrection of Jesus to persecute his followers for proclaiming its implications to their fellow Jews at Damascus. In Christian gospel, Christian art and Christian mysticism, the risen Christ always retains the wounds of historical crucifixion even or especially on his glorified and transcendental body. Those wounds do not heal or fade. They are forever there.

I take seriously Paul's claim to have seen the risen Jesus and I think I suggest that his inaugural vision was of Jesus' body, simultaneously as crucified (by Rome) and as glorified (by God). That, of course, put God and Rome on a collision course. Such a stunning vocational vision already contained foundationally the full message of Paul's faith and Paul's theology, the full meaning of Paul's life and Paul's death.

Finally, as with his arrival in Damascus, so also with his departure. Paul and Luke both superficially agree and profoundly disagree there as well. They agree that the the city's gates were guarded against Paul and that he escaped by a basket lowered through a window in the wall. Today, Damascus' Bab Kissan Gate is the traditional site of that hurried exit. 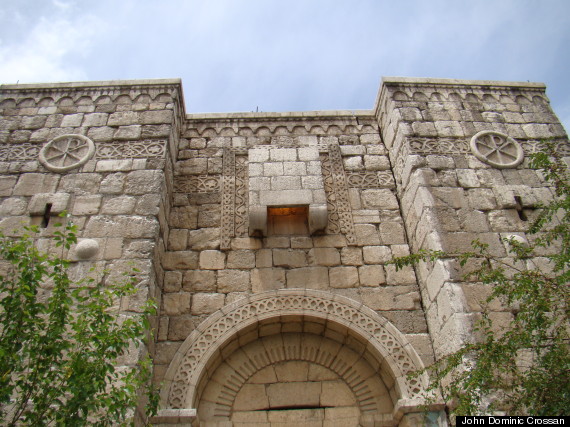 But who guarded those gates? For Acts, "the Jews plotted to kill him" and they were "watching the gates day and night so that they might kill him" (Acts 9:23-25). But, for Paul, it was not the Damascene Jews but the Nabatean Arabs who were the actual threat. "The governor," he says, "under King Aretas guarded the city of Damascus in order to seize me" (2 Corinthians 11:32-33).

It is not that Luke lacks correct information about Paul. It is that he interprets all he has from the viewpoint of at least two generations after Paul. It is also a viewpoint within which Paul would have been unable to recognize his own mission or message, purpose or intention.