Facebook may be hard to quit for a teenage girl, but as it turns out, cash is one powerful incentive.

Boston father Paul Baier was able to lure his 14-year-old daughter off the social media site after offering a five-month, Facebook-free contract worth $200, CNN notes.

Baier, a vice president of sustainability consulting and research at Groom Energy Solutions, posted about the contract on his blog, Practical Sustainability, on Tuesday.

SCROLL FOR FULL PHOTO OF CONTRACT

Payments will be secured in two installments.

As ABC News points out, the contract was actually his daughter's idea.

"She approached me. She has been frustrated she hasn't been able to find a babysitting job and she has been looking for ways to get cash," Baier told ABC News. "So she asked, 'If I didn't use Facebook for so long would you pay me?'"

And the contract was drawn up. The Boston father told the news outlet that, so far, his daughter has upheld her part of the bargain.

"She has deactivated a few times for the weekend," he said "She has spent two to three years on Facebook for 24/7, she realizes there is a lot of talk and noise."

A new Pew study shows that the teen may not be the only one getting Facebook fatigue. The Pew Internet and American Life Project reports that 61 percent of Facebook users have taken "a voluntary multi-week break" at some point during their usage.

Plus, now the 14-year-old can spend more time hanging out with her friends face-to-face, perhaps sporting a new outfit bought with her cool $200. 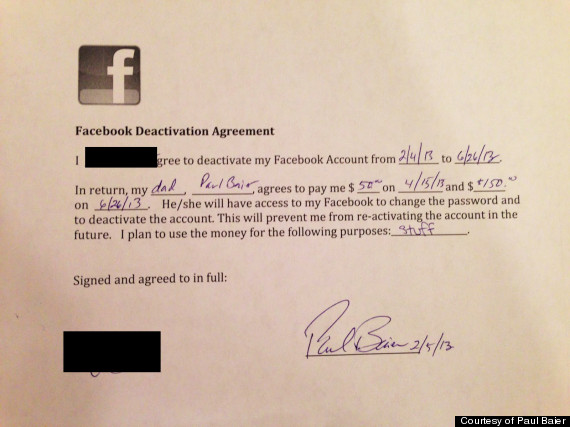 More:
Parentsparents-families-tech
Newsletter Sign Up
Raise the kind of person you'd like to know
Subscribe to our parenting newsletter.
Successfully Subscribed!
Realness delivered to your inbox